The Solace of the Jersey Shore

A place to contemplate loss and recovery. 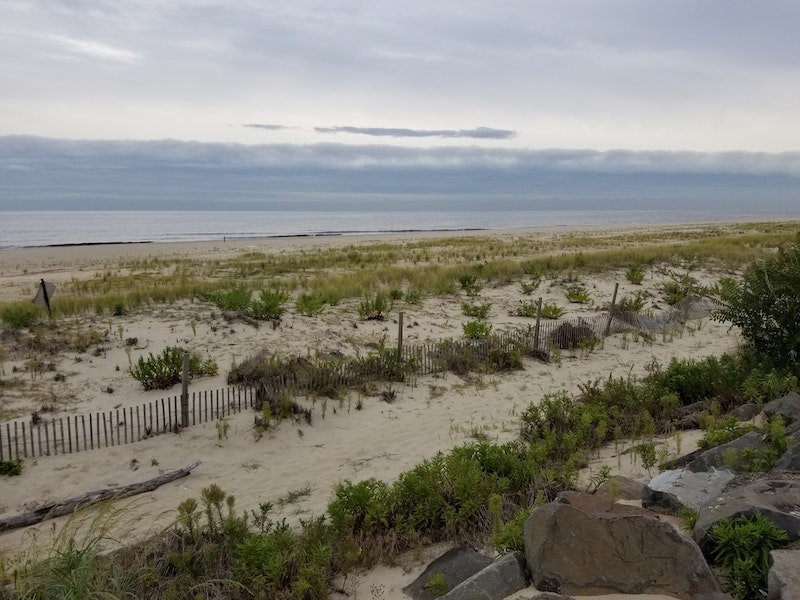 This summer was framed by my mother’s illness and death. The cancer diagnosis came in late June. By early August, she was a hospice patient in the Queens apartment she lived in and where I’d grown up. Several weeks before she passed away, I took a break from my daily visits to spend a day and night visiting a friend with my wife and son in Sea Bright, near the northern end of the Jersey Shore. You can easily see Manhattan from the beach there, with Long Island stretching off toward the horizon.

The Jersey Shore is a place of loss and recovery. Our friend’s house is on stilts, renovated after the flooding of Hurricane Sandy. The Shore’s on the edge of my personal history; I’ve visited it perhaps 15 to 20 times over several decades but never stayed long, a native New Yorker and then northern New Jersey resident who went to the Shore because other people had houses there or wanted to go. Two women friends I associate with Shore trips died before their time.

My friend Chris Tufaro is putting together a folk rock album called Monmouth, the title the name of the town just south of Sea Bright and also of the county. His acoustic ballads tell an intertwined story relating to the destruction Sandy wrought on his family’s house on the Shore. His music is suffused with coming to grips with loss.

My mother had a longstanding interest in the paranormal. She left behind hundreds of books on the subject (for which I’d be interested in finding a suitable collector) and expressed a desire to make contact from beyond. I plan to visit a paranormal bookstore/museum in Asbury Park that holds seances. I mentioned this place to my mother, so she’d know I don’t dismiss her wish, and in case that helps her find me.

On the beach at Sea Bright, I read an advance copy of Artificial You: AI and the Future of Your Mind, by philosopher and cognitive scientist Susan Schneider. She offers a skeptical take on the type of immortality hoped for by some enthusiasts of high-tech “transhumanism”: one’s mind being uploaded into a computer. She points out philosophical uncertainties as to whether such a transfer would be an extension of your life or the end of it. She advocates “metaphysical humility,” a recognition of how little we know about human consciousness and identity.

That sounds like a good approach to me. On the Jersey Shore, which has been battered by forces beyond human control and will be again, it’s good to remember we don’t have a handle on everything.