We need to think about collective as well as individual rights. 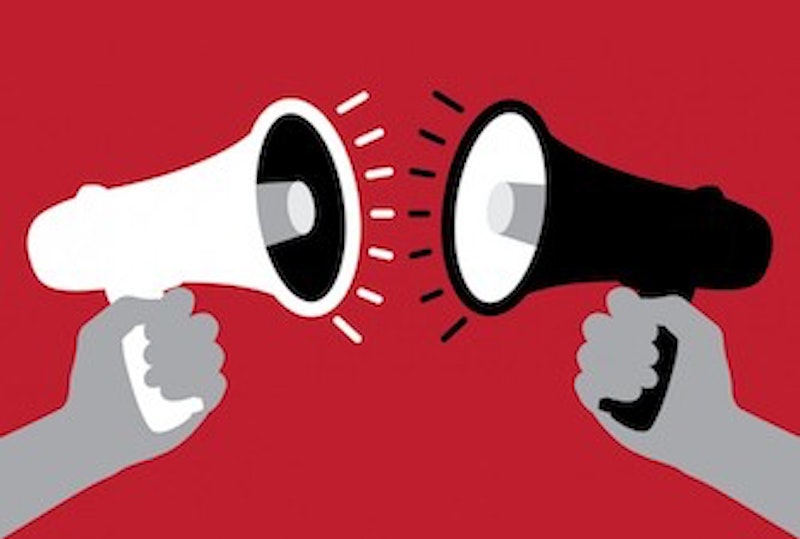 Many fellow advocates of free speech in this era of ever-increasing repression base their arguments on elaborately-reasoned long-standing philosophies, sometimes summarized as "classical liberalism."

This tradition makes use of John Locke's argument that every person has inherent rights, derived ultimately from God or perhaps nature, and which they enter into a social contract to preserve. It’s a very elaborate argument, beginning with a description of what human life was like before the existence of any government, and what rational people would’ve agreed to in creating one: they would’ve sought to preserve their natural rights insofar as that’s possible, while securing their safety and property by putting themselves under the authority of a state.

The great 20th-century political philosopher John Rawls made the argument hypothetical: if fully rational and unprejudiced people were to meet and try to secure their lives, liberty, and property in a social contract, they’d try to impose limits on the power they were creating, lest they become their government's prey (the typical, actual historical outcome) and lose the rights they went into the agreement to secure. These are the sorts of positions that lead directly to the American Constitution with its contractual form ("We the people… do ordain and establish") and its Bill of Rights.

Another battery of arguments associated with classical liberalism was put forward by John Stuart Mill in his book On Liberty. Mill doesn’t rest his defense of free speech on inherent rights but on the good societal effects of "the marketplace in ideas." Any belief, he argues, must be open to testing by objection, or else it’s very likely that false beliefs will persist indefinitely. Even a true idea that’s not tested becomes a shadowy piece of dogma, unjustified because it is untried. As in science (at least in an idealized version), hypotheses must be tested by being open to objections, a kind of political experimentalism by which we may hope finally to arrive at a decent outcome.

One or both of these arguments may ultimately be an adequate ground for defending some degree of free speech, but particularly from the point of view of today's leftist critics, they’re vulnerable, as well as obscure. The claim that each person is by nature an independent agent equipped with a bundle of inherent rights might require, for defense, a whole characterization of what it means to be human, particularly if you leave out the God part. Many people, including Marx and contemporary “communitarian” philosophers, regard a position like Rawls' as far too abstract and far too individualistic: individuals arise in social systems, the objection goes, which are the actual sources of their rights, if any. We need to think about collective as well as individual rights.

Insulting or slur-laden or even inadvertently insensitive speech is often held nowadays (on my college campus, for example) actually to constitute violence. If so, then even a classical liberal will have to frame the question in terms of a clash of rights, and it may be that the right of people to speak is outweighed by others' right not to be assaulted. As to Mill's version: if the way people talk is central to racial and gender oppression, for example, then at a minimum we should start to wonder whether free speech does have good effects on human happiness overall. And to many of today's free-speech skeptics, the "marketplace" argument sounds awfully capitalist. They describe it not as an eternal truth, but as an artifact of the competitive individualism characteristic of capitalist ideology of the 19th century.

Furthermore, the marketplace approach seems to protect only ideas that could take up a useful place in political or scientific debates. That doesn’t seem to include a comedian, or an angry bigot, using a racial slur on a podcast. What does using unapproved pronouns add to the marketplace of ideas? It’s plausible to think that many things people say just have no role in testing the truth of anything or leading to good cooperative political outcomes.

All these objections may be wrong. It might take us decades to answer them convincingly, however.

I’m not rejecting Locke's or Mill's sort of arguments, and I’m ready to demonstrate that there's an important distinction between yapping and doing someone bodily harm. But the core of my own commitment to free speech rests on far other grounds, not on what I have the natural right to say but on who has the political right to silence me—who, that is, has the right to control my body. That hits, as it were, very close to home: right where I live. My defense of free speech, in short, is visceral, and it applies whether the people doing the silencing are a government, a social-media company, or an angry band of cancel-culture no-platformers: This thing on my face? It's my mouth. That one on yours is yours. I control this one; you control that one.