I had a boyhood crush on Morticia that may have bled into my teenage years. 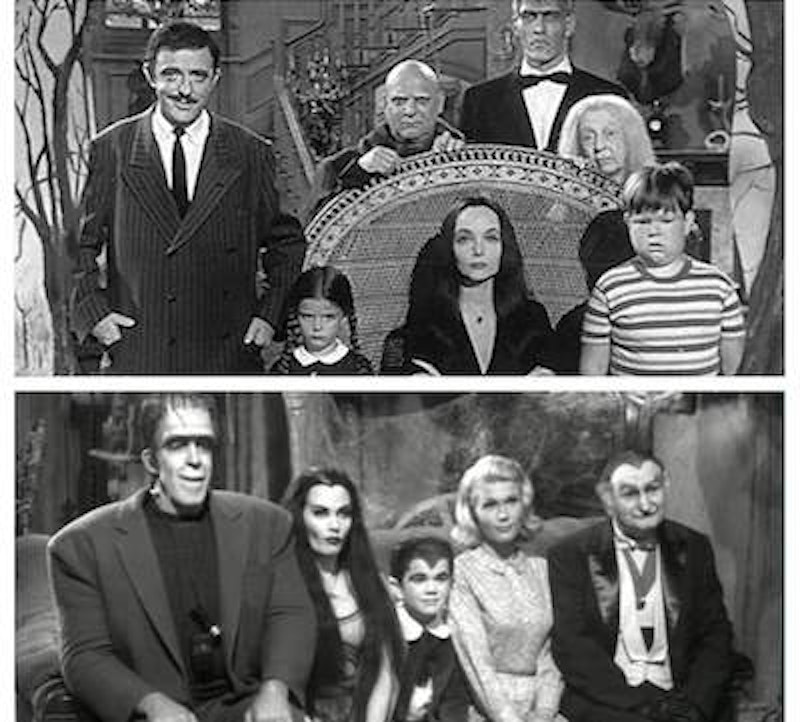 There are no perfect families. Fairytale dynasties like the Kennedys are little more than a sordid tale of power, greed and insanity. Propped up on the mantle of a rich lineage filled with obscene wealth and questionable privilege. On the surface, in the public eye they appear flawless. Under the surface there’s a dark carbonado. A bubbling stew of jealousy with malicious intent and backstabbing envy. My family was as dysfunctional as most. With nuclear unions it’s a given that a tight knit unity of matronly ma and pa patriarchy falls somewhere between the British royals, the first family and The Bundys. Generations of fraud and scandal plagued by old money or the lack thereof. Before all that familial mess came to the surface it should be noted that the bigoted Archie Bunker's All In The Family exposed creepy signs of the times to the peace and love generation. Radical stoner hippies protesting an unjust war and fighting for civil rights. Simultaneously blue-collar sexist beer drinking dads who faithfully went bowling every Thursday night were the norm (and probably still are).

Television brought the imperfection of TV families along with the senseless Vietnam War in vivid color to our living rooms every evening. We watched the horror unfold over bland Swanson TV dinners. Unless we were lucky enough to have a stay-at-home mom who could actually cook. There was little else happening in my childhood besides reading books to escape the mundane life of school and family except to absorb TV shows. Escape from the mind-numbing reality of modern living to the fantasies of The Twilight Zone and The Outer Limits. A place where you could let your mind wander and forget all your cares and troubles. But nothing more out of the ordinary evening television schedule compared to The Addams Family or The Munsters. The long battle of superior dominance. The crown goes to The Addams Family. I daydreamed endless school hours of monotony away imagining I was Gomez Addams or Uncle Fester. Some days even Lurch.

The Addams Family had a beatnik flair. Like Maynard G. Krebs from Dobie Gillis meets Dracula. Gomez with his oversized pinstripe suits and cigar smoking, always quick with googly-eyed innuendoes and double entendres. His love of blowing up model trains in the basement and gymnastic feats of physical prowess while holding a cigar in one hand and a drink in the other. Never spilling a drop. He was the perfect foil for Morticia Addams, his cool chick wife whose black floor length gowns made her appear to glide across the room. Her black-on-black fashion sense added to her long flowing black hair. Morticia was elegant while commanding the room upon entrance. She could be deadly with her own personal style of black humor and wry wit while snipping the rosebuds and tossing them away, keeping only the thorny stems in a vase. She’s the original proto punk Goth girl feeding her meat-eating plants.

I had a boyhood crush on Morticia that may have bled into my teenage years. I sought out the weird offbeat type girls who wore black and held a strange witchy air of gallows humor mixed with a sexy funeral parlor glow around them.

The Munsters inhabited the opposite end of the brood. A cartoonish derivative stock resembling more The Flintstones than anything close to The Addams Family. The original Addams Family was portrayed as a cartoon created by Charles Addams for The New Yorker in 1938. The Munster family was born in 1964. No fond memories of the Munsters ever come to the surface except Grandpa, the bumbling head of the Munster clan. He fell somewhere between a vampire count, a mad scientist and a stand-up comedian. His slick backed hairstyle resembled Paulie’s in The Sopranos. A different kind of creepy TV family.

It’d be great to see a new version where the Addams Family and The Munsters do a wife swap or appear on the game show Family Feud. Everybody wants to believe in the existence of the perfect nuclear family. Like the belief in faith and existence of gods. I like to believe in the Addams Family. An old Charles Addams cartoon comes to mind of the family on the roof of their haunted old Victorian home pouring a cauldron of hot oil down onto a group of Christmas carolers. The perfect family group of friends and relatives I’d wish to celebrate Halloween with all year round.