From west to east, 155th St. is varied and occasionally entertaining. 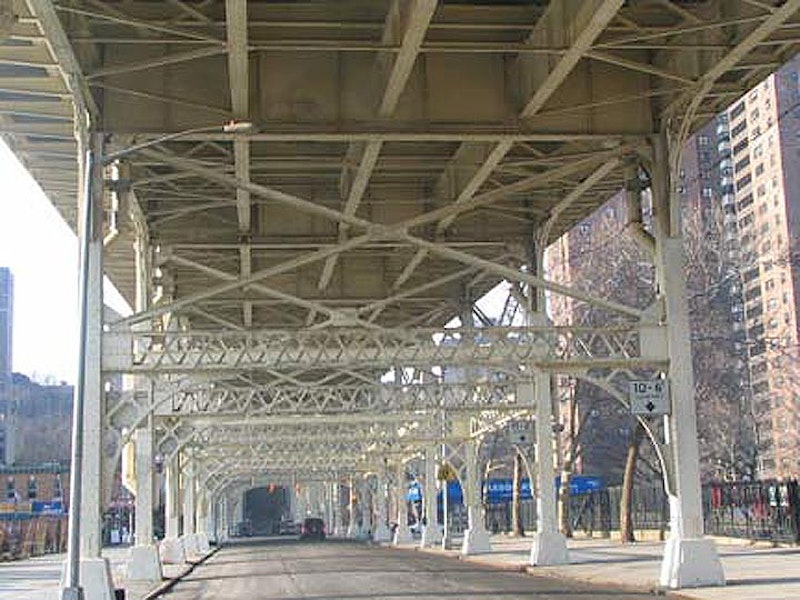 When surveyor John Randel Jr. drew up the Commissioners’ Plan for the street grid system of Manhattan Island, the furthest north east-west street on the island he planned was 155th St., and in subsequent maps for the next 50 years, 155th remained Manhattan’s planned northern limit. I decided to walk it, west to east, since its elements are varied and occasionally entertaining. 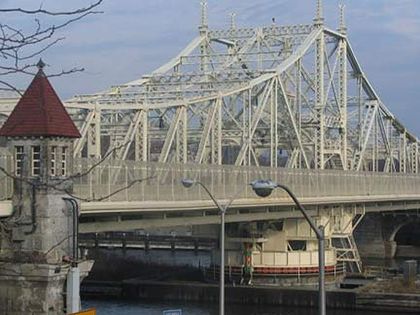 W. 155th begins at the Macombs Dam Bridge, where Adam Clayton Powell Blvd. (7th Ave.) and Macombs Pl. meet at the Harlem River. An old esplanade overlooking the river affords an excellent view of Yankee Stadium, built in 1923 (and replaced by a new version in 2009). The Macombs Dam Bridge was built in 1895, replacing a couple of earlier spans, and has been given a thorough remake, including a very light buff paint job.

In the W. 150s, Manhattan is divided in two by a deep valley, with higher land on the western end. Most of the streets in this area are separated by Jackie Robinson Park, which runs along the escarpment, bordered by Edgecombe Ave. (“combe” is derived from an Anglo-Saxon word meaning “hill”). The 155th St. Viaduct spans the valley, with little-used staircases leading down to street level. 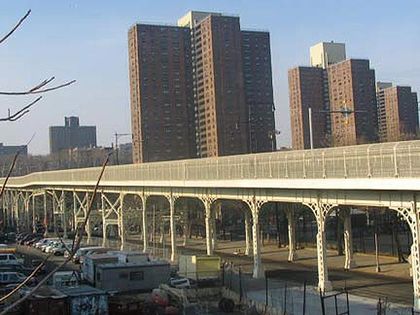 The 415-foot long 155th St. Viaduct, originally built for carriage traffic, was completed in 1895, the same year as Macombs Dam Bridge; engineer Alfred P. Boller handled both projects. The staircase railings were originally designed by Hecla Iron Works, which would also design the exit and entrance kiosks for the IRT Subway in 1904. They were restored when the viaduct was repaired in the early-2000s. 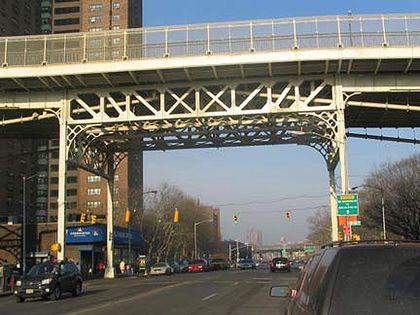 The old 9th Ave. Elevated ran on 8th Ave. (Frederick Douglass Blvd.) under the viaduct on its way to a Harlem River crossing before descending into a tunnel under a high Bronx hill. The construction of the viaduct was a lucky stroke for el travelers in the neighborhood, who, if they lived atop the hill, had to descend from the el and then walk up the equivalent of eight stories. Staircases connected the el to the viaduct when it was built.

Just west of Bradhurst, W. 155th dead-ends at a brick wall abutting some pure Manhattan schist. A steep staircase conveys pedestrians up to the viaduct. The viaduct continues west to Maher Circle, at Edgecombe Ave. and the Harlem River Driveway. We are in the former town of Carmansville, one of Manhattan’s small 19th-century towns, this one named for a landowner, Richard Carman, who moved here in the 1840s after making his fortune rebuilding lower Manhattan following the Great Fire of 1835. Trinity Cemetery’s uptown branch now occupies land formerly owned by Carman.

Harlem River Driveway denotes a roadway connecting the Viaduct with Harlem River Dr., running along its namesake river. This section is actually the oldest part of the Drive, and got its start as the Harlem River Speedway, opening to horse-drawn carriages in 1898. The Speedway obtained a reputation as a leisure area where aristocrats could show off their horses and livery. It was also a prime viewing area for boat races. In 1922 it was paved and became a vehicular road, and after 1940, Robert Moses turned it into an approach road for his new pedal-to-the-metal Harlem River Dr., and more recently, it was sub-named for Willie Mays, who used to play at the Polo Grounds. 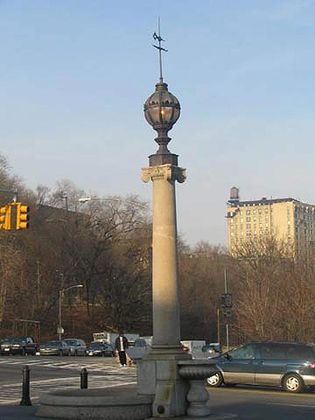 All of the above are true. The highly unusual Hooper Fountain at Maher Circle, W. 155th and Edgecombe Ave. and St. Nicholas Pl. was a gift from civil engineer/newspaperman/entrepreneur John Hooper. In his will, made public upon his death in 1889, he appropriated funds for the construction of two public fountains that had to include horse troughs as well as drinking fountains. Both fountains were built in 1894: the one here, designed by George Martin Huss at Maher Circle and another in Brooklyn at Flatbush and 6th Aves. in Park Slope that disappeared long ago.

The unusual design features a trough topped by an Ionic column with a human-scale drinking fountain appended; a spherical lantern topped by a weathervane tops the column.

After motorized traffic overtook equine in the early-1920s the trough became an anachronism and efforts were made to have it removed to a bridle path. But here it remained, decade after decade with no upkeep and gradually deteriorating. Vandals finished it off in 1981. However, it was renovated, brick by brick, and restored to its old spot in the mid-1990s. 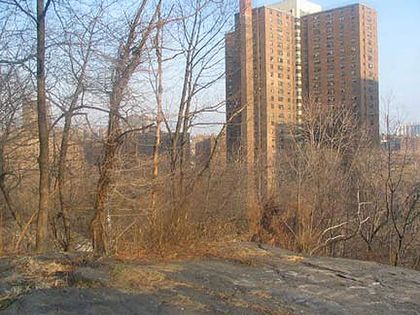 A walk north up Edgecombe Ave. from W. 155th and a flat, woodsy area near a playground comes into view. Walk over the Manhattan schist rock that pokes through the dirt and look down into the valley. This is Coogan’s Bluff, and it formerly overlooked the Polo Grounds, the stadium where the New York Giants played for over five decades. Yankee Stadium and the Macombs Dam Bridge can be seen between the towers of the Polo Grounds Houses, which replaced the ballpark in the early-1960s after the Mets moved to Shea Stadium after the 1963 season. 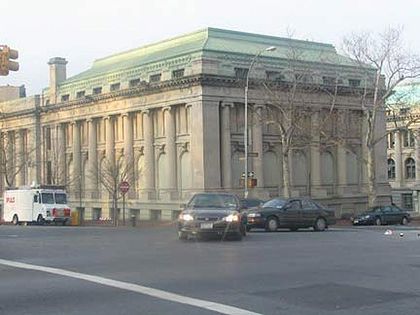 Audubon Terrace, on land formerly held by John James Audubon, is an underpublicized mixture of Beaux Arts and American Renaissance architecture, and is home to Boricua College, the Hispanic Society of America, the American Academy and Institute of Arts and Letters, and formerly, the home of the Museum of the American Indian, which has relocated to the Custom House in Bowling Green and larger digs on the Mall in Washington, DC, the American Geographical Society (now in Milwaukee), and the American Numismatic Society (basically the “Money Museum”), now on Fulton and William Sts. downtown.

Landmarked Audubon Terrace was commissioned at the behest of railroad heir Archer Huntington in 1907; his wife Anna sculpted the statue of El Cid, the legendary 11th-century Spanish knight, on the grounds.