More on My Experience With Demonic Possession 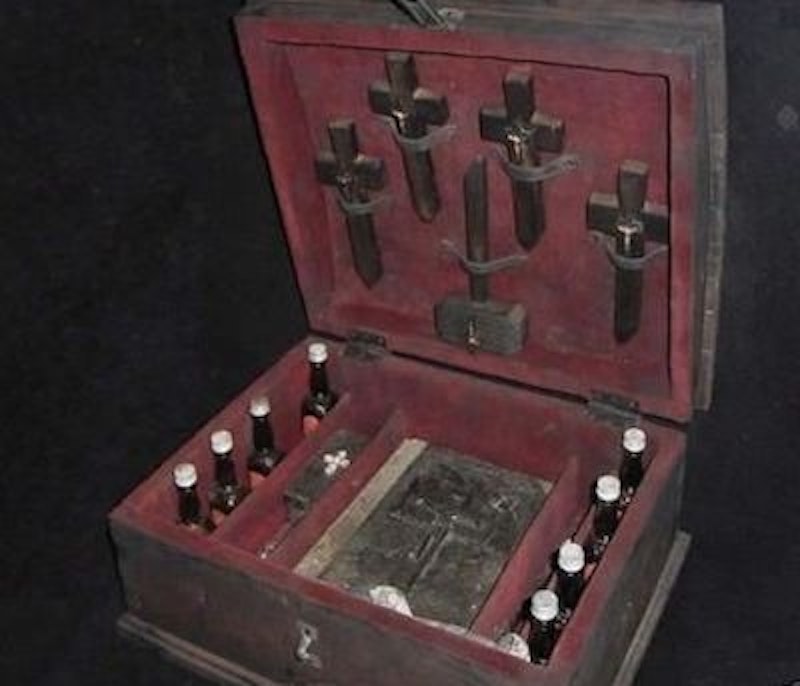 A number of readers have written me with a question concerning my last week’s diary entry about the first of my experiences with demonic possession. I described how, during a dinner four decades ago in Bloomington, the wife of my friend was seized by the demon that latently inhabited her. Her eyes rolling back in her head, she roared out ancient Aramaic phrases in a rich basso profundo.

What, these readers want to know, exactly were those Aramaic phrases?

As it happened, I transliterated them on that night to the best of my ability and took them as soon as possible to a professor Biblical languages at the University of Indiana. This was a wry aging women, a German émigré, whose face became all the wryer as, having translated the bit, she passed the paper back to me. She had translated the Aramaic thus:

This of course was mere gibberish in Carter-era America. But in retrospect it’s obvious that it’s anachronistic gibberish—gibberish that looks ahead almost half a century to the transgender testicle- and nipple-waxing controversies that are exercising us traditionalist conservatives today.

I have a thousand more things that I could say about this Satanic episode. One issue that’s always fascinated me in particular, though, is the conception of time that this Satanic anachronism expresses. How, in fact, did the demon that possessed my friend’s wife “perceive” time? Did it see time as an always-present unity, meaning that the demon was, from its own point of view, manifesting no prophetic power, but merely “reporting” an always present—indeed eternally present—reality? Or did it perceive time according to a linear, secular model, thus implicating me (but why me?—another interesting question) as a witness to what can only be termed an episode of infernal prophecy?

A question for the theologians, this. And one that has nagged at me for the better part of a half-century now.

My second experience of demonic possession occurred when Daughter was four years old, and already manifesting, precociously, that tendency towards the digital manipulation of her pudenda that would characterize her adolescence. I’m not sure how much I should say about this. Every one of the manifestations of Satanic possession that I’ve witnessed has been intensely traumatic. But this one, which involved my own flesh and blood, particularly “cut to the quick,” as you can imagine.

Images from this episode, and from the fraught weeks leading up to it, are seared into my consciousness. First, there was the confrontation that it was my paternal duty to instigate. My intention was to be calm but stern in setting forth my position, which was this: there would be no self-pleasure in our home; and if there were to be, I’d be the one to do it, not a four-year-old girl.

Any father of a girl should be able to imagine the near-lunacy of the girl’s enraged response.

Then came the period of the nocturnal vigils—when Mother and I, sneaking on stocking feet, would secretly haunt the girl’s bedroom, sniffingly alert for the action of the daughterly finger as it rehearsed the Transgression of Onan.

Next came more scenes: accusations on my part; denials from the girl.

Well. We would see about those denials. Events piled on top of events, driven by their own logic, until there we were: Brother Gavin, Mother, Maria Ivanovna from the parish, and Father Nicodemus, in the girl’s room at night, staging an “intervention,” to use the degraded therapeutic language of our times. The four of us held the girl down while Father Nicodemus, in his full clerical robes, bent over the girl’s anatomy, searching for marks of the demon on the crucial nubbin.

“There is no evidence of Satanic possession,” growled Father Nicodemus as he straightened from his search, wiping his wonderful sweaty beard. “The problem is in the girl’s willpower. She must overcome her fallen nature.”

Was I relieved that, according to Nicodemus, there was no demonic agency behind the girl’s self-abuse? Or was I disappointed that the fault was hers alone? I don’t remember. At any rate, Nicodemus was wrong. Suddenly the girl spasmed in rage and screamed—there as we held her down—with an intensity of rage that I could not have imagined existed in her. What a horrifying firehose-stream of vitriol and contempt spewed from her four-year-old mouth… from the mouths of babes indeed…

Father Nicodemus lifted his crozier in what was either surprise, or fear, or triumph—maybe all three.

“Ah, there it is. You were right, John. There it is—the demon, making itself heard!”

The girl kicked. The lamp swung. I remember getting a bit light in the head as Mother fell to her knees, keening out a prayer for deliverance...