The drinking age in New York was 14 then, but you could get served if you passed for 12. 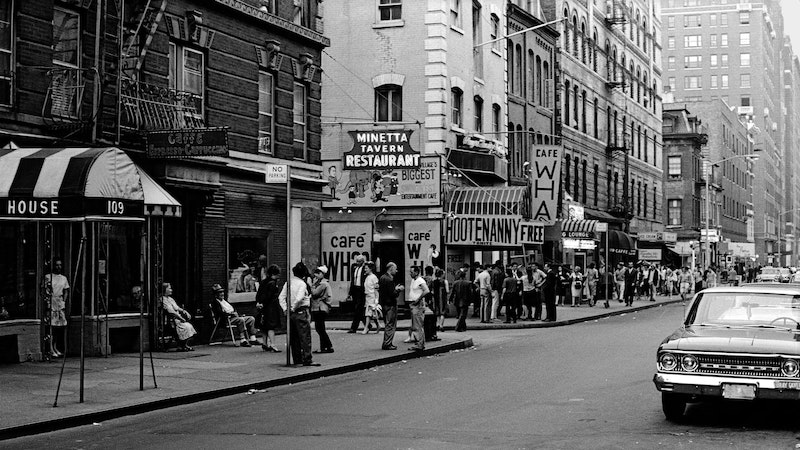 When I was little, most people didn’t have television sets. So got I dragged around to bars a lot. There wasn’t much to see except Milton Berle or maybe a prizefight, but it was good to get out of the house.

In those days you could walk up 3rd Ave. for blocks, and never miss a word of Uncle Miltie. The whole avenue was bars. This changed when the 3rd Ave. El came down in May 1955. The neighborhood improved somewhat, and pretty soon all you had left were P. J. Clarke’s, a couple of spaghetti cafés, and some bird bars around E. 53rd St.

The bird bars were populated mostly by homosexuals. They were called bird bars because they usually had a bird in their name: The Pink Cockatoo, The Blue Budgerigar. I used to sneak in these places dressed as a boy, just to see what was going on. They didn’t bother me, because homosexuals aren’t interested in kids. They bought me drinks though.

The drinking age in New York was 14 then, but you could get served if you passed for 12. By the time I could drink legally I had a real alcohol problem.

I was a hermaphrodite, and in those days they used to pressure you to declare for one sex or another by the time you entered your teens. They’d tell you, if you don’t decide what sex you are pretty soon, you’ll end up a weird-looking adult, and you won’t get married and have kids. I looked at my mother and my stepdad Dan, and wasn’t sure I wanted to grow up at all.

I spent part of every year with my real father in California. He had a ranch in Montecito. I’d be a boy when I was with him, not that he cared one way or the other; he was usually soused. But I was in my Spin and Marty period. I was telling people I was going to be Tim Considine when I grew up.

Then one day my father shot himself. I don’t know why. He was just drunk and depressed. My mother had to fly out and get me. We drove down to Disneyland before we flew back.

Back in New York my mother took me to Dr. Max Josephson, a gland specialist on Park Ave. He treated old people who didn’t want to be old, and also people who didn’t know what sex they were. Dr. Max was half-Jewish but also a Nazi. His best friend was Mr. Sylvester Viereck, a famous poet who spent years in prison during the war for being a Nazi. These two old guys had spent most of their lives in America but they talked in thick German accents. Just to show off.

Dr. Max and Sylvester would take me out to a hotel bar around the corner, and drink schnapps. The bar was so dark Dr. Max had to take out his pocket flashlight just to read the menu.

They’d pretend to discuss world events, and then suddenly start selling me on the various advantages of being male or female. “If you don’t decide now, you vill grow up to be ein veirdo,” Sylvester would say.

They were like the Katzenjammer Kids when they talked.

They’d get me very drunk on liqueurs, which I think they sometimes spiked with truth serum, but I was stubborn and refused to talk. They’d tell me it was important to choose a sex, because most good colleges were single-sex.

In other words, here I was, maybe 12 years old, and already they were riding me to figure out whether I wanted to go to Yale or Vassar. As things turned out, the colleges all went co-ed a few years later, so in the end the issue was moot.

Anyway, my attention was on other things. The year after my father shot himself and we went to Disneyland, my mother went hopelessly insane. She probably always was, but the booze hid it. She went to AA meetings for a few months and then the craziness came out.

We didn’t have the money for a good private sanitarium, so she ended up being put away in one of the state insane asylums, way upstate in the middle of nowhere. I think she ended up dying there.

Then my stepdad Dan left. He took a job building pre-fab houses on Guam. At least that’s what he said. I moved in with my Aunt Pudge who lived on Perry St. in the Village.

I was always just a girl with Aunt Pudge because she did not like weirdness in any way. I went to an all-girls school in the E. 80s, and she worked long hours at Time-Life Books, then went out drinking with friends, so we hardly ever saw each other.

On my own in the evening, I’d check out the queer bars in the Village sometimes, dressing in what I thought was appropriate fashion. These Village bars weren’t as nice as the bird bars uptown. They were patronized mostly by old people. I had to pretend to be looking for my father or mother when I was in there, and nobody ever bought me a drink.

A nameless lesbian place under the West Side Highway wouldn’t even let me in. I think you had to be about 40 years old to enter. Julius’ at Waverly Pl. and 10th wouldn’t serve me liquor, but they did have good hamburgers on toast.

One of my Aunt’s boyfriends gave her a bottle of Johnnie Walker Black for Christmas. As she was not a Scotch drinker, it just sat on the shelf, collecting dust. I thought, “What a waste.” I broke the seal and started to take nips from it. Within a week it was gone. I filled the bottle up with tea and put it back up on the shelf.

Wouldn’t you know it though, right after that Aunt Pudge woke one morning with a terrific hangover and decided she needed some “hair of the dog.” She immediately figured out what I’d done, and smashed my head through the window. The authorities came by and tried to put me in a home for delinquents, but then they found out my special condition and sent me back to Aunt Pudge instead. Of course it was all news to her too.

She was mad, but calmed down and took me out to the Schrafft’s on 5th Ave. for a late sundae, only we stayed all night and got completely plastered instead. Schrafft’s closed up at midnight and threw us out. We were embarrassed, but too drunk to care.