Who’s up for a gulp of Castoria? 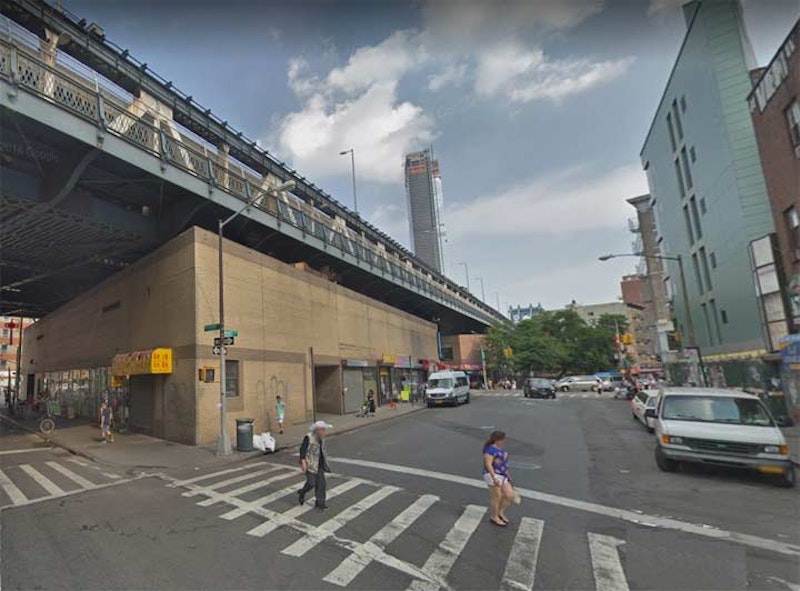 My fascination with Market St., a short street in Chinatown just to the west of the Manhattan Bridge, began on a lunchtime stroll when I was working at Macy’s in the summer of 2001. I’d frequently take the train downtown or uptown—sometimes I’d go as far afield as Brooklyn. I was going up Division St., on my way to the F train at E. Broadway to get back to work, when I spotted a lamppost with a Florence Place street sign.

I’d vaguely recalled a Florence Pl. in these parts. The Bible on these matters, Henry Moscow’s Street Book, says, “Florence Place was authorized by the Board of Aldermen July 1st, 1913, for the enlargement of Market Street between Forsyth and Division Street.” That’s odd, though, since if you go by that reasoning Florence Pl. would have to go through the Manhattan Bridge approach to reach Forsyth. And, Forsyth intersects Division once you pass under the Manhattan Bridge. In 2001, the Florence Pl. street sign pointed at the entrance to a parking lot that at one time may have been a dead-end Florence Pl. and there’s a parking garage on that site in 2013.

A few years later, Gil Tauber had the definitive Florence Place explanation at his website oldstreets.com. Florence Pl. was laid out as New Market St. where the parking garage is now, and ran from Bayard St. to E. Broadway at Market St., and was renamed Florence Pl. in 1913. Most was eliminated in 1960, with a short remaining piece running between Division St. and E. Broadway. When I found the sign in 2001, the Department of Transportation must’ve been consulting some old maps. In any case, the sign has disappeared. 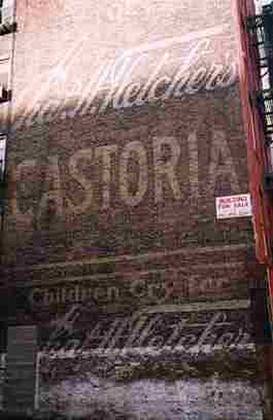 A year or two before that, when my website (it’s really now an encyclopedia of NYC infrastructure) forgotten-ny.com was just getting going, I spotted this huge painted ad for Castoria at 13A Market St., just south of E. Broadway.

Charles H. Fletcher began selling his Castoria, a mild stomach remedy for children, in 1871. The medicine was heavily promoted on ads and billboards in the late-1800s and early-20th Century, and evidently the paint used for the ads was of a very high grade, because several ads survive to this day. It’s still available.

The Market St. sign read, "Children Cry for Cha. H. Fletcher's Castoria" in the florid, ornate script of the period. This one bit the dust in mid-2003 as the building was whitewashed, but the Castoria ads can still be seen elsewhere, though fading more every year. 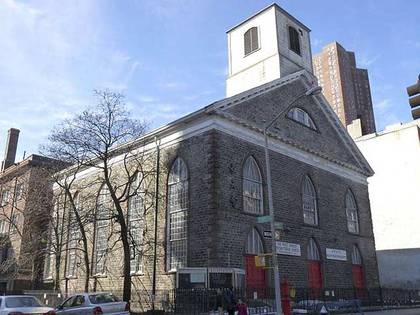 At the SW corner of Henry and Market Sts. is what was originally the Georgian Market Street Reformed Church, which was built in 1819. The windows are made up of multiple panels—35 over 35 over 35. This is now the First Chinese Presbyterian Church, which shared the building with the Sea and Land Church until 1972.

The brick and stone Georgian-Gothic church was constructed two centuries ago as the Market Street reformed Church on land owned by Henry Rutgers, and after changing congregations a few times over the years, it’s now the First Chinese Presbyterian Church. It’s in the top five oldest extant church buildings in New York City, the oldest being St. Paul’s Chapel on Broadway and Vesey St. 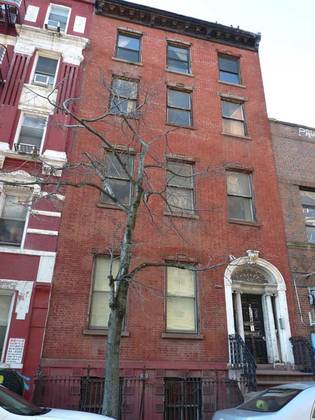 This shabby brick building at 51 Market St. was constructed in 1824 by merchant William Clark. Its original elegant doorway, with Ionic columns, a fanlight and ornamentation, has survived nearly two centuries. A close look at the basement windows shows them to be surrounded with brownstone work with squiggly lines, known in the architecture world as “Gibbs surrounds.” A fourth floor, which studiously copied the original three, was added after the Civil War. The stoop and railings, however, are not original as they were replaced in 2010. The door is festooned with graffiti, and though the house has Landmark status, its condition appears deteriorated. 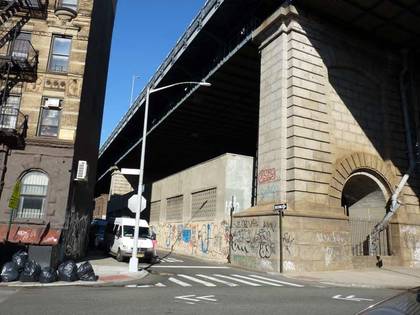 Down by the Manhattan Bridge, from Henry to just south of Madison, there’s an alley unmentioned on any printed New York City atlas or map, Mechanics Alley, which runs for two blocks, Madison to Henry, but is identified only by a lone street sign on Madison.

Though it has obtained a more narrow sense, the word “mechanic” originally meant an artisan, builder or craftsman, not necessarily a machinist. Part of it was once called Birmingham Alley or Street. No property fronts on the narrow lane, but trucks nonetheless employ it despite its narrowness to avoid heavier traffic on streets like Market. 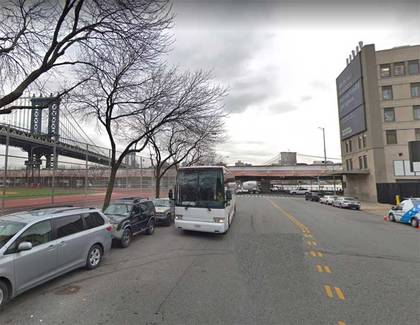 The section of Market St. between Cherry and South Sts. expands to two lanes. It’s one of the few streets in NYC that permits a view of both the Manhattan and Brooklyn Bridges in the same vista.

There are a number of short streets along the East River from the Financial District northeast to Corlear’s Hook, where the East River turns north, called “slips.” I’ve pored over maps of other cities over the years, and in the United States at least, “slip” seems to be a unique appellation to streets in NYC, because Manhattan used to have a unique feature: man-made inlets, mini-harbors where cargo-laden sailing ships could sail in and unload goods, and the aroma of coffee beans, spices, nutmeg and condiments filled the air. Manhattan Island’s edges were swampy; the Dutch expanded the island into the East River by landfill, but originally left the inlets, or “slips” for docking.

Our shorelines have, in recent decades, been turned over to lazers, parkgoers and idlers, as port activity has moved to other locations like Newark or even further away. But there was a time when South St. presented a vista as far as the eye could see of sailing ships’ bowsprits and hawsers, and West St. was thronged with shop owners buying wholesale from merchants docked along the Hudson River shoreline. As late as the early-2000s, tourists’ and revelers’ noses were struck by a pungent fishy odor along Fulton, South and the maze of streets in the Seaport, as the Fulton Fish Market was still there, a hive of activity from the overnight hours to the early morning; the Market has since retreated to Hunts Point in the Bronx.

All but Coenties Slip had been filled in by 1850 but the names have survived as archaisms.

—Kevin Walsh is the webmaster of the award-winning website Forgotten NY,  and the author of the books Forgotten New York (HarperCollins, 2006) and also, with the Greater Astoria Historical Society, Forgotten Queens (Arcadia, 2013)