DNA is Not a Prophecy

As I understand it, little is absolute. 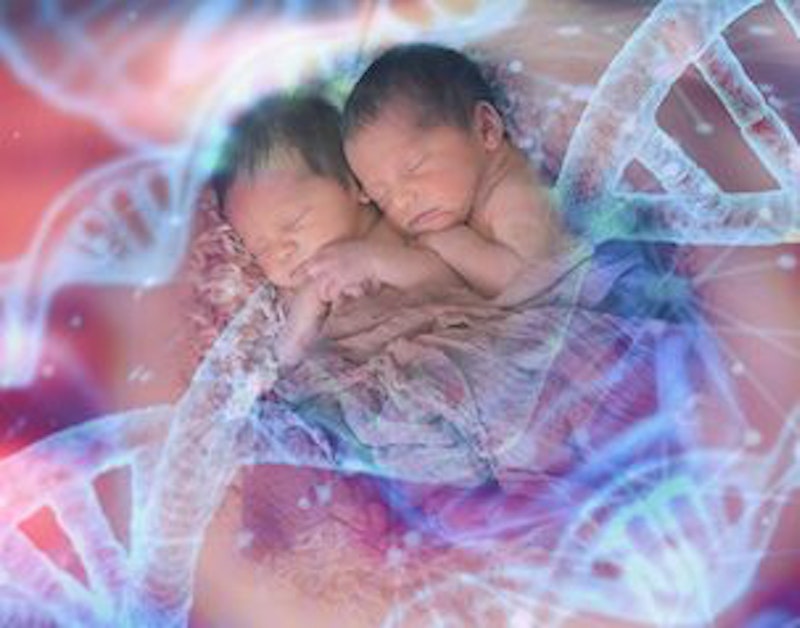 On November 26, Chinese scientist He Jiankui announced the birth of twin girls, Lulu and Nana, whose DNA had been edited by He while they were still in the womb. According to He, the girls had been born several weeks before the announcement and were in good health. Again according to He, they have had one gene disabled, preventing the transmission of HIV from their HIV-positive father. These claims have not yet been verified.

Rather than publish in a peer-reviewed publication, He told the world about Lulu and Nana by posting videos to YouTube and informing the Associated Press and other media outlets. The reports sparked skepticism, widespread condemnation, and great concern among scientists over the lack of transparency of He’s work and the apparent lack of caution involved in his editing of human genes. Many researchers have said it will be impossible to know whether the edits will have unintended consequences for the twins and any offspring they may go on to have. Others, on the basis of the partial information released so far, have questioned whether He’s edits were effective—and whether the mother and father were fully informed of the nature of the procedure.

At the end of one of the YouTube videos describing the project, He included an email address for people to write to Lulu and Nana, DearLuluAndNana@gmail.com. The following is a message I sent to that address.

It is mid-December of 2018 as I write. I don’t know when or if you will read this. In writing to you I’m writing to the future. That is true of any letter written to a newborn, which must be read at a later time. It may be particularly true of this letter to you; it may not be. As far as I’m concerned you may choose to feel about that how you like.

I don’t know at this time whether the procedure that has led me to write to you has succeeded, or how healthy you’ll grow up to be. But in some ways you have already become symbols of the future. Any baby can be seen as that, but both of you more than most. I never think it’s fair to human beings when they become symbols, but it keeps happening, and I’m afraid that it has happened to you due to choices made before you were born.

I’m writing to wish both of you health and prosperity and long, fruitful lives. I hope your future will be free of exploitation and unwanted fame. I hope that this has never been or ever will be an issue for you; whatever else Doctor He Jiankui has done right or wrong, however you feel about him when you read this letter, I think he did right in keeping you anonymous and I hope that anonymity is maintained for as long as you both wish it.

(I hope also that this letter is not exploitative in itself. I’m writing it knowing it will be published for the public on an American website, Splice Today. But I hope for the readers there it will have something to say about you as people in a way that means something to them, however slight.)

You will know that you attracted so much attention from around the world when you both were babies because of the way your genetic code was altered by deliberate human agency. I hope that you know that biology is not destiny. What I’ve been told is that DNA is not a prophecy, or not a narrow one. It’s a road map, a series of if/then statements. If you eat a certain sort of food you’ll grow up to a certain size. If you live under certain environmental conditions, you’ll develop in a certain way. As I understand it, little is absolute.

I’d imagine it might become easy to feel that the procedure performed upon you both before you were born has defined you. It hasn’t. Like every other person who has ever been born, you have the ability to define yourself. And like every person who has ever been born, you will define yourself in ways you may like or may not, in small ways at first and in bigger ways as life goes on.

If who one becomes is in part a function of the qualities with which one was born, much of it’s also a function of choices made freely as an individual. Human consciousness allows for a certain degree of freedom. It allows us to be who we choose, within certain limits—but what those limits are is not always clear. A writer named Thomas Mann once wrote (in a wonderful book called The Magic Mountain) that “human reason needs only to will more strongly than fate, and she is fate.” This is admittedly more difficult to do than to say. But it can be done.

The American Declaration of Independence says that all men (by which is meant all people) are created equal. I’ve never understood that to mean literally that all human beings are equal in their gifts and flaws. I believe it means that all humans, by virtue of being humans, are of a kind; that their differences, vast as they may seem, are insignificant next to that common humanity which means that they all have certain inalienable rights. All of this applies to both of you, and I say this because I’m afraid that your existence will raise in some minds the fear of human beings who are not born equal but engineered to be superior. It shouldn’t. Human beings are human.

I don’t have much wisdom, this windy letter notwithstanding. I’m not a parent, and between you and me (and anyone else who reads this) I don’t really want to be. I’m an uncle, though, to two little girls, and I’ve thought about the future in a different light since they were born. I’ve tried to think about the world they will grow up in and the world they will grow up to, and all I’ve realized is that it’s impossible to know what those worlds will be like. I’ve also thought about how we grow and become who we are. This leads me to conclude that if I can say little else to you I can at least say this:

Congratulations on being who you have become, whoever you are.