What happened to my smile? 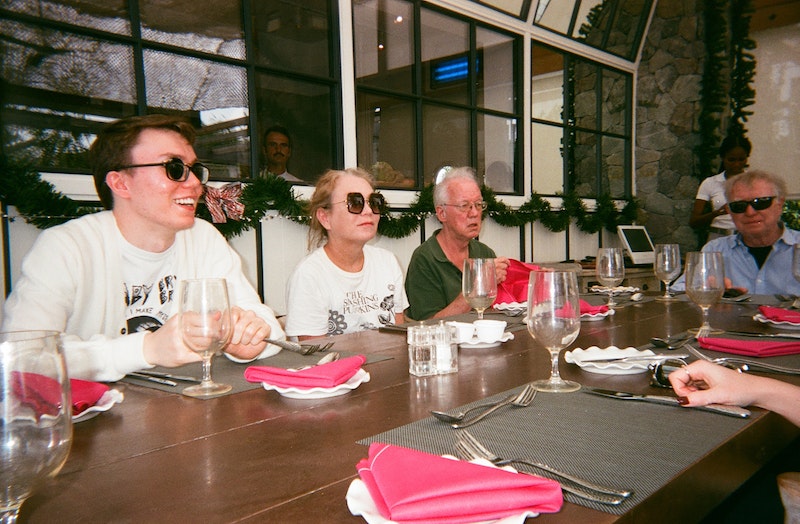 A couple of weeks ago my son Nicky emailed a dozen photos, shot on a disposable camera, commemorating the 75th birthday bash of my oldest brother in Canouan from a year ago. I’m third from the left, and it’s possibly the worst image of me ever recorded, since I look barely alive. I should’ve followed by my brother Gary’s lead—he’s five years older—and worn shades at the lunch spot where we ate unusually great pizzas at the Caribbean resort. What can I say? The ravages of age, particularly hard on those of Irish heritage, which I pointed out to my sons—Booker, looking like a million bucks, on the left—to which they quickly retorted that at 63, they’ll take after their mother’s side (my wife Melissa, second from left), which surely would be a blessing.

Not that I really give a hoot about appearances at this stage—not much you can do—but it was jarring, more than the mild horror of looking in the mirror each morning while brushing my teeth, and knowing my prankish children, this gem will make it into a family album and perhaps survive a lot longer than this not-quite senior citizen.

Seeing my sour expression when we looked at the photos on his phone, Nicky tried to gussy it up, concocting a far-fetched tall tale of his impression of the image. First, given the lighting, he said we all looked Asian; that was fantastical enough, but he continued, imagining that this was like a film press conference in Cannes, circa 1962, with yours truly as a not-yet-dead Akira Kurosawa, sitting back, watching as the “hot young star,” that would be Booker, taking center stage, while Melissa (a staple of the director’s films) and Gary as the publicist/agent directing the assembled journalists, making sure their questions weren’t too nosy. The latter thread is believable, for my fourth oldest brother doesn’t take guff from anyone, and has little patience for people whose intelligence is on par with a rooster waddling around a restaurant, looking for table scraps.

Nicky was so enthusiastic, not to mention creative, in spinning this scenario, that I couldn’t help but go along, grudgingly, with the story, even while rolling my eyes. I remembered what seemed about five minutes ago, when as a 20-year-old in 1976 visiting friends in Jersey City, mid-winter, wearing one of those muted-colored Icelandic scarfs, jeans, cowboy boots and red & black checked coat, a photographer stopped me on Amsterdam Ave. in the city and asked if I’d pose for a few minutes. I did, of course, chuckling at my sin of vanity, forgetting all about it until a few months later when a vandal burglarized the Johns Hopkins News-Letter office and made off with the scarf, and, more significantly, the fancy Minolta camera that I inherited upon my father’s death several years earlier.

It could be worse: in pretty good health for a sexagenarian, I could conceivably feel as bad the photo implies. What the hell, let’s forget about all this now, and talk about me, myself and I. Another year’s come and gone, and, unlike so many people who mouth off on social media, I didn’t think it was a notably bad one for the United States, at least compared to decades past, particularly the entirety of the 1960s (leaving aside all music, drugs and relaxed social mores).

As anyone who saw the atrocious Vice (save for another bravura Christian Bale performance; who must have the constitution of a horse, gaining and losing so much weight for various roles), it was a reminder that less than 20 years ago the country was involved in two active wars, and while the body bag count didn’t come close to Vietnam, it’s not as if Trump has engaged in any nation-building. Granted, he’s probably too busy shadow-boxing with all the people he hates (mostly the mainstream media, Democrats, Hollywood, and the Fed) that he doesn’t have the time, or patience, to ramp up the military to invade this or that country, but is that so bad?

For the record, in 2003, I was in favor of Bush’s war in Iraq before I was against it, after it was clear that his administration had no coherent plan on how to proceed once Saddam was taken out. Which brings up this question: before Watergate broke wide open, wasn’t an assignment like eliminating Saddam the CIA’s job? You send in 50 agents, maybe half a dozen snipers, and take care of business, rather than wasting lives of American soldiers and innocent Iraqi civilians. I carry no Smirnoff’s for the CIA (or FBI), but its once mysterious aura is now in the same league as a $.21 postage stamp.

As I write, Twitter’s jammed up with commentary about Mitt Romney’s self-serving op-ed in The Washington Post, in which he says Trump is devoid of “character.” Sharp observation, Mitt! Despite his lackluster 2012 campaign against Barack Obama, Romney’s hardly stupid, he’s just addicted to presidential politics, a narcotic so strong that even a devout Mormon lives for the spike. I suppose Romney is preemptively setting himself up as the “reasonable” Republican when/if Trump runs into criminal trouble and is down for the count in 2020. That’s hearts-a-thumpin’ you hear in the Beltway, at least from conservative apostates like Bill Kristol and Max Boot. (Although the latter has donned such a heavy crown of thorns—apologizing, and apologizing, as he hawks a new book, for his allegedly dashed conservative views dating back to the last century, it’d be very difficult for him to pivot 180 degrees once again.)

My son, just this moment, said “Isn’t it crazy that the Democratic presidential debates are just five months away?” I shooed him away—think, Buster Brown, before you take another unflattering photo of your old man—stating the obvious that America’s Permanent Campaign waits for no one. I really can’t believe Democrats are taking Joe Biden or Elizabeth Warren seriously, and hope that Bernie—just one name, he’s earned it—wins the nomination. And loses—to a GOP candidate not named Trump or Pence, one who repudiates all this pernicious Xenophobia Republicans have brayed about for way too many years.