Many famous names have occupied The Osborne over the decades. 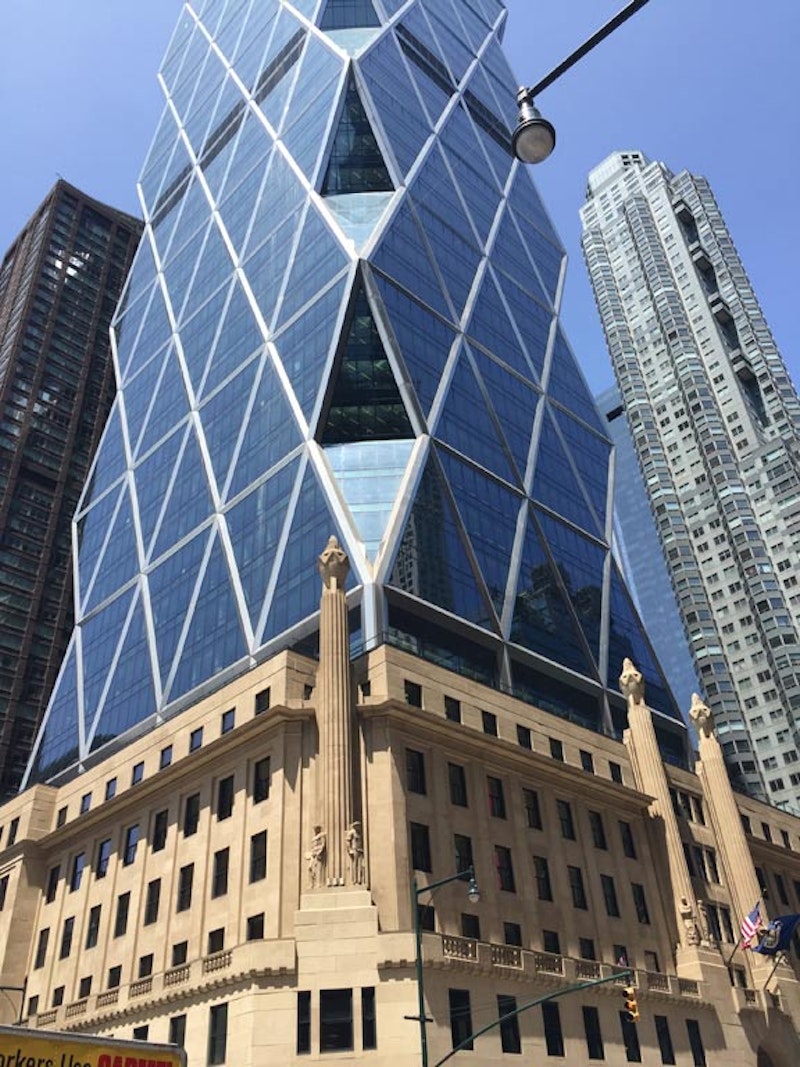 I’m continuing a freelance job in the Columbus Circle area this month, and using my lunch hour to explore the circle’s nearby blocks for interesting buildings. This part of town is seeing a building boom as “supertall” apartment houses, rising to 1400 feet tall or better, are springing up. Formerly, very tall buildings hosted offices; the residential trend began in New York by Gehry downtown on 8 Spruce St. when architect Frank Gehry, whose modernistic designs resembled crumpled pieces of paper to me, built what was then the tallest residential building with a wavy, undulating exterior. I thought it was innovative. It was followed by 56 Leonard Building, which resembles glassy Jenga bricks piled atop each other. The new midtown “supertalls” are more prosaically designed glass swords thrust skyward.

My preference runs toward older buildings of a century or more. Above is the Hearst Tower, originally built at 8th and W. 57th in 1927 and home to offices of publications associated with Hearst, including Cosmopolitan, Esquire, Marie Claire, Harper’s Bazaar, Good Housekeeping and Seventeen. In the early 2000s the original interior was gutted and a new diamond-paneled glass tower designed by British architect Sir Norman Foster emerged from within the exterior shell of the original tower. I like the diamond-paned tower better than the 1927 base, which resembles something out of imperial Rome, and I don’t think the two are a great combination—Foster should’ve picked one or the other. 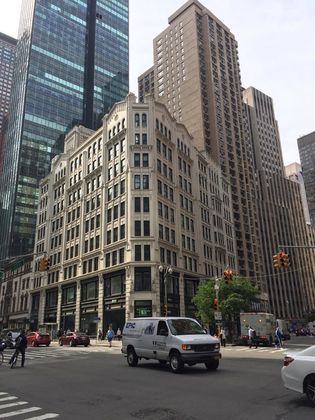 What’s currently called the Argonaut Building is a gleaming terra cotta neo-Gothic building at the southeast corner of Broadway and W. 57th St. Formerly, it was near one of my favorite places in NYC, Coliseum Books, named for the former New York Coliseum where the twin-towered Time Warner Center is now. The bookshop was located in what had been General Motors Building at 1769-1787 Broadway. It’s really two buildings in one: the first three floors were built in 1923, and the upper 23 in 1927-1928. A decade ago, the entire building was given a new glass façade.

The Argonaut Building was also owned by General Motors, which took it over in 1920. The building was originally the headquarters for the long-vanished Demarest and Peerless auto manufacturers after it was constructed in 1909 in a neo-Gothic style echoic of the Broadway Tabernacle at Broadway and 56th. By the 1960s, the huge Tabernacle was gone, replaced by a bland office tower, but the Argonaut, given the name by GM, remains as something of a tribute to the old church. GM sold the building to the Hearst Corporation. The presence of auto manufacturers on this stretch of Broadway was a northern extension of the carriage manufacturers who dominated Times Square before honky-tonk and then the neon facades of showbiz arrived in the early-20th Century. 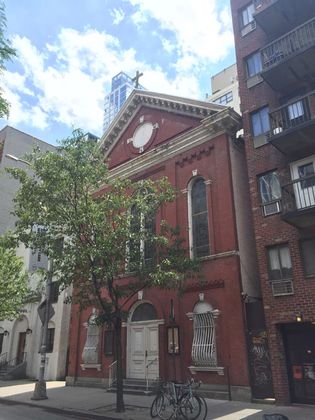 Churches are usually the bellwethers of neighborhoods, surviving as everything else changes around them. But even they suffer the ravages of change. St. Benedict the Moor Church was constructed at 342 W. 53rd, between 8th and 9th Aves., as the Second German Church of the Evangelical Association in 1869. In 1898, the building became the parish church of St. Benedict the Moor, one of NYC’s first Catholic African-American congregations. The parish had been established in lower Manhattan in 1883 and moved uptown as populations shifted. The congregation merged with the nearby Sacred Heart of Jesus Church in 2007, and the building was deconsecrated in 2017, awaiting its next use, and deserves Landmark designation for its history alone. 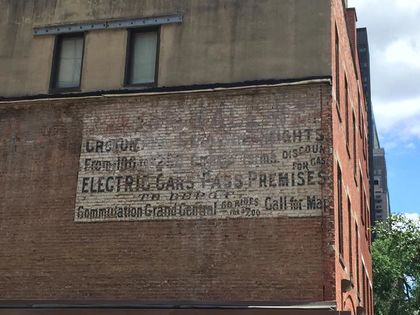 A bit further east on W. 53rd, at #315, is a stable building that in recent years has had an ancient ad exposed on its west-facing side. It’s one of the oldest ads I’ve seen uncovered by a demolition. The line I can make out says “Electric Cars Pass Premises.” I infer that trolley lines passed by the venue being advertised. Grand Central (Terminal) is also mentioned; while the present building dates to 1913, the original depot was built on the same acreage in 1871. Unfortunately most of it isn’t readable, but there’s just enough to determine its ancient lineage. 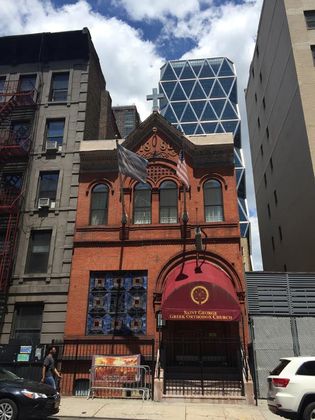 St. George Greek Orthodox Church, at 307 W. 54th St. off 8th Ave., is located in a tidy two-story Romanesque building with its date of construction, 1886, emblazoned at the roofline. For much of its existence it wasn’t a church at all. It was built as the headquarters of the Narragansett Club, a Tammany Democratic headquarters, by architect H. J. Grant. Coincidentally, the NYC mayor elected in 1889, Hugh J. Grant, had the same initials as the architect. In 1906, the building was sold to the Knights of Columbus, the Catholic fraternal society, and then in 1915, it hosted a bicycling club, and by the mid-1930s, the Orthodox church. Thankfully its tenants over the years have not changed the exterior much. 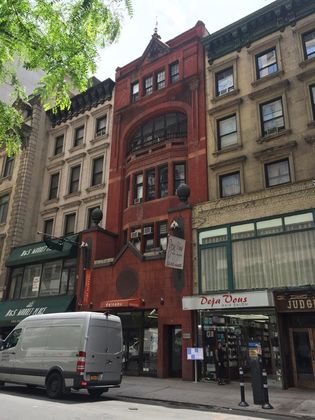 The south side of W. 56th, between 5th and 6th Aves., is home to a number of eclectic townhouses that have survived over the years. Some of them have been given NYC Landmarks protection, but the oddest of them at #36 hasn’t, probably because it’s been altered more than the others over the years. However, most of its Queen Anne quirks have made it through the years. It was built in the early 1880s by architect Bruce Price for Dr. William J. Morton, a pioneer in electric shock therapy and the use of x-rays in diagnosis: among his patients were President Ulysses S Grant. Dr. Morton later served jail time for his involvement in a mailing scam. W. 56th fell into desuetude somewhat, and the ground floor was considerably altered in the 1930s as the building hosted a speakeasy. 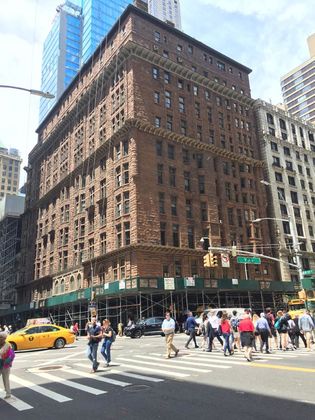 Catercorner to Carnegie Hall at W. 57th and 7th Ave. is the Osborne Apartments, built mostly from 1883-1885 with a top floor addition in 1889, and a further extension west in 1906, one of the finest brownstone apartment buildings in the city. Original plans called for it to feature a billiard room, a florist, a resident doctor and druggist, and a croquet pitch on the roof. Developer Thomas Osborne was a stone contractor and the building reflects that with a varying stone exterior that catches the sun from myriad angles. James Edward Ware was the original architect and Alfred S. G. Taylor and Julien Clarence Levi were the architects for the 1906 extension. Osborne ran into financial trouble during construction, but the building was completed by hotel operator John Taylor.

Many famous names have occupied The Osborne over the decades. Tragically, actor Gig Young killed his wife and committed suicide here in 1978.