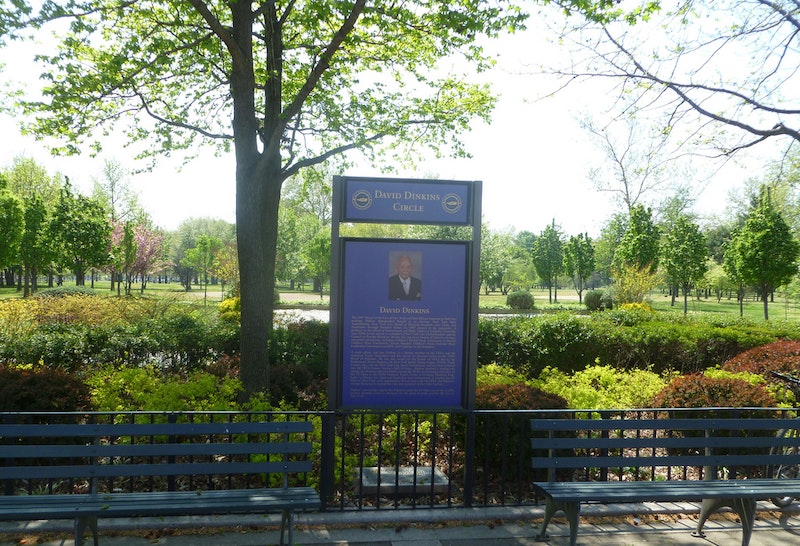 David Dinkins Circle, named for the first and only African American NYC mayor, honors him for his support for the construction of the new Arthur Ashe Stadium, where the US Open is held at the end of every summer. The mayor was and is an avid tennis buff; Ashe Stadium opened in 1997. Until September 2008, Ashe Stadium’s anagram was across the railroad tracks: Shea Stadium.

The Circle is found at the bottom of the pedestrian ramp from the Mets-Willets Point #7 train stop; the Long Island Rail Road also has a seasonal stop on the ramp, which stretches as a concrete boardwalk over the Corona subway yard and then runs as a concrete pavement to the park entrance. There you will find a representation of the Trylon and Perisphere, the symbols of the 1939-1940 World’s Fair, in differently-shaded pavement blocks.

Arrayed around the outside of the circle are several mosaic representations of items and events from both the 1939-40 and 1964-65 World’s Fairs, some of which describe exhibitions that have been pretty much forgotten about by now. They were installed in 1998, though they look older than that. 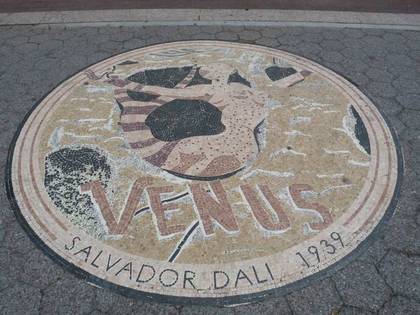 The colorful surrealist was commissioned to do an exhibit, and aided by his sponsor, a manufacturer of rubber mermaid tails, produced several models swimming in a glass swimming pool, wearing practically nothing except the rubber tails. Dali survived the inevitable outrage and threats of censorship by the Fair’s organizers and boycotts by religiously-minded upstanding citizens. 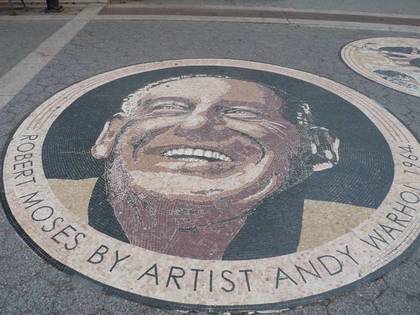 Another mosaic depicts a smiling Robert Moses, the longtime NYC Parks Commissioner and traffic czar, who built so many of NYC and Long Island’s parks, parkways, and expressways, gleefully bruiting them through long-established neighborhoods.

When Andy Warhol was commissioned for a 1964-65 Fair exhibit on the exterior of the NYS Pavilion, he chose to blow up mugshots from thirteen “Most Wanted” criminals of 1962, and it was actually installed before Moses and other officials decided it wasn’t what they wanted and covered it in gray paint (some accounts say Warhol himself was dissatisfied with it; other say Governor Nelson Rockefeller didn’t like it, since all thirteen were Italian and some had already been pardoned).

The irrepressible Warhol then silk-screened 25 images of Moses himself, which he proposed as a replacement mural, but the Fair turned down those as well. This mosaic is the only extant representation of the controversy. 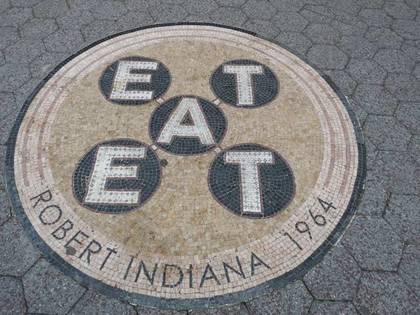 Other mosaics celebrate artist Robert Indiana’s “Eat” neon billboard, produced in association with Warhol, the NYS Pavilion, designed by Philip Johnson and currently in a rehabilitation, the Fountain of the Planets, the Hall of Science from the 1964-65 Fair and the Billy Rose Aquacade and NYC Pavilion (now the Queens Museum) from the 1939-40 Fair. 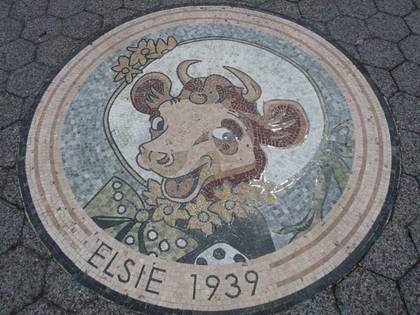 Lastly, a mosaic depicts Elsie the Cow, who made her debut at the 1939 Fair as Borden Product’s spokescow. She was also supposed to make the fair in 1940, but she was busy shooting “Little Men” and her husband, Elmer, replaced her. Elsie and Elmer had two calves, Larrabee and Lobelia, and Elmer wound up on plastic glue bottles for decades, which is better than going to the glue factory.