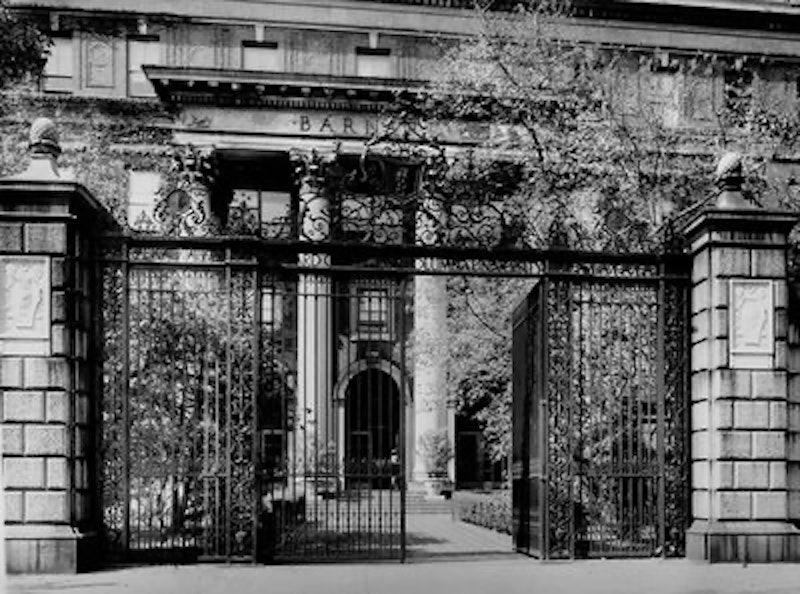 More evidence for the decline of the academy, as if any were needed: the daughter of a prominent paleoconservative thinker and writer—a pure-blooded Anglo-Saxon—is apparently enrolled at Barnard College, in New York City.

Let me explain why this is so depressing. There was a time when an academically inclined daughter of Old American stock would’ve been able to avoid an institution like Barnard, understanding it as unworthy of the heritage of her gentile people. She would’ve been no more likely to attend such a school than she would’ve been to sit shiva for her grandmother (or bubbe in the pungent language of our great Jewish ghettoes), pack her cheek full of gefilte at an earthy dejeuner sur l’herbe in a filthy park in immigrant Chicago, or execute a “sharp” bit of business in the stock market, confident in the collusion of the fellow members of her subtle tribe.

No, she would’ve understood that Barnard was an essentially non-gentile institution. That college has long been dedicated to lending the daughters of American Jewry that veneer of culture they’ll need to accompany their speculator husbands to soirees at third-rate country clubs in vulgar suburbs.

She herself, of course, would’ve attended a school more congenial to her kind. Bryn Mawr, maybe, which both my grandmother and great-aunt attended. Or Smith, especially if she excelled at golf. Or even Radcliffe, if she were ugly and had aspirations as a bluestocking. Vassar might even have fit the bill, though its graduates for decades carried a reputation for being only too eager to fellate Bonesmen.

But Barnard? Never. Yet here we are, arrived at such degeneracy that the pure White daughters of paleoconservative journalists must grapple in the West Side filth with the girl-spawn of peddlers, straight out of the slums of Aleichem or Malamud.

Disgusting. And I don’t even want to get started right now on the horrifying fact that American Conservative columnist, Putin aficionado, and pure Anglo-Saxon Daniel Larison—a PhD who’s simultaneously one of our era’s great Orthodox theologians and one of its most distinguished Slavic linguists—has, as far as I know, been unable to land a real academic job at a first- or second-rank institution of higher learning.

And I do mean begging. I mean to be honest in this space, and the fact is that I’ve been making a spectacle of myself. No, a stern Orthodox patriarch I’m apparently not.

“Just until Easter, Daughter,” I plead from the other side of her bedroom door, in those wee small hours when my surveillance has caught her in the bed-shaking act. “Just until the Pascha most venerable. You’ve got to have enough self-discipline as that.”

You can imagine the bathos to which she rises—or descends. At any rate, I walk away from her door, feeling my failure. The fact is that I’m going to have to resummon my energies if I’m going to triumph here. I must find succor in Christ.

Father Nicodemus, meanwhile, assures me that as part of his Lenten rigors he will redouble his nightly research into Estonian, Ukrainian, Hungarian, Slovak, and Latvian lesbian teen pornography. These researches form part of those harrowing investigations into contemporary depravity that he undertakes willingly, as part of his pastoral duties, and in the interests of identifying the Deceiver, and defending his flock.