Diary of a Bushwick Buyout #1

A call from the building super after a 311 complaint. 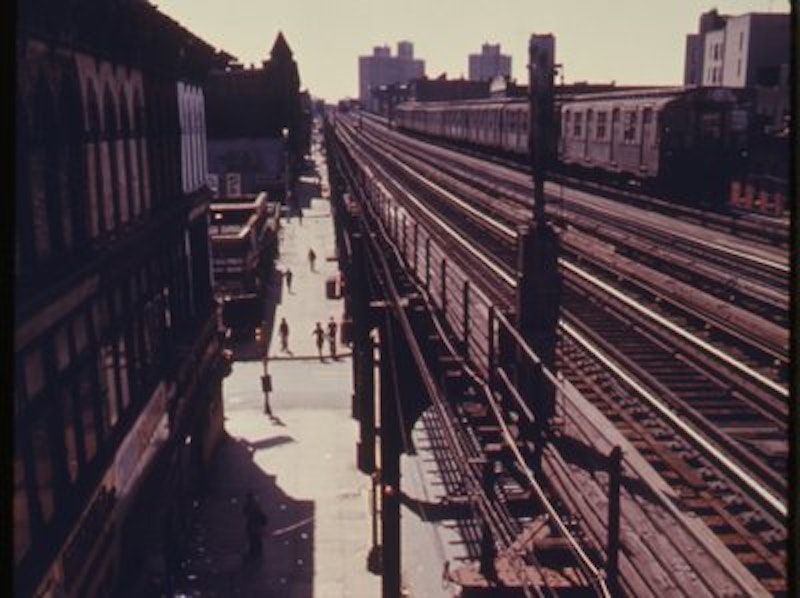 I, the tenant of a nice old building in Bushwick, was at the library on a Friday, two days after having filed an online 311 list of apartment complaints, violations about which I’d emailed both the previous building owner and superintendent. In fact, it was because of such emails that I first learned that the building had been sold to G--, a rising-star company of young investment landlords. When I went to get the new front door key from S-- R-- Management, I mentioned the problems again and received assurances from the property manager that the apartment conditions would be addressed. When a length of time went by and the super did not fix the problems, I took the next step of filing my complaints online with 311.

This filing caused the new macho super Paul to materialize. With great agitation Paul was simultaneously calling my phone and banging furiously on the door of my apartment. “Where are you? Are you home? I want to meet you personally. Because I don’t know who you are. You just cost me lots of money with the damned 311 violations. Why you no call me first? Why you go to HPD? $835 in fines, and it only fucks me. It don’t fuck the owner, don’t fuck nobody but me. Comes out of my paycheck!” Paul screamed into the phone.

“I’m recording this conversation,” I let him know. “That’s okay! I don’t care. I see you are a smart guy, not easy to manipulate. But where are you? You home now? I’m outside the apartment.” I explained that I was not home at the moment. I asked Paul to agree to come 10 a.m. Monday to see the apartment issues. “Good! I want to introduce myself,” Paul growled, “because you got me very pissed off.”

“Good,” I countered, “I want to introduce you to the mold in my room, the toilet that doesn’t flush and the leaks in the ceilings that I showed to the old owner and the appraisers when they came for a walk-through months ago. I’m disappointed that the old owners didn’t pass the information into your hands. Not surprising though. They swapped out receptionists every other week.”

“It’s a completely different company now. The old guys were slumlords,” Paul explained and consented to come Monday, but he kept on ranting, “See you got that tenant association and now you are calling 311. That’s not how it works. You are supposed to call the super first. You call the super many times, and then if you don’t get satisfaction, you call the owner, and if you don’t hear from the owner, then you call 311, by all means, but not before that. It’s a last resort, 311. I have your files in my office. I have everything, all the paperwork for the apartment, and I do not see any previous complaints from you. You never called before about this problem.”

I informed Paul that that was far from true. I shared that I had in fact emailed the previous super Bob and owner G-rd-n many times and that I could produce the emails as proof. I complained to Paul that the previous landlord was negligent. I argued that Bob barely did any of the promised repairs, neither those requests submitted with the lease renewal nor the issues communicated in subsequent emails to management: from the poorly flushing toilet to the leaking ceilings to the broken fridge, the cracked and unlockable window, and the mold in the corner of my bedroom.

Once Bob, a day late, did attempt to fix my flooding bathtub that for a nightmarish day, night and next morning issued endless sewage and dirty water that my roommate and I had to collect in buckets and dump into the toilet to prevent a total flood. This emergency, however, happened on a holiday for the landlords, so work could not immediately be done until the morning after. But when Bob came, he’d contracted unskilled workers who stemmed the tub’s flood, though their solutions ultimately proved to be sloppy, Band-Aid fixes, ignoring the building’s larger plumbing issues. A gurgling bathroom sink and filling tub soon necessitated another call to Bob. This time a certified plumber came to the apartment, and after his work he stood in disbelief. The plumber shared, “These landlords must have hired crackheads for the cheap labor, because the previous job was not done even kind of right. Not to mention, the pipes in this building are extremely old and the system is messed up and not easy to replace. I don’t think the landlords will pay to have it done.”

When I told him this, Paul replied, “Really? A crackhead? Wow! I don’t know. Who was this crackhead guy? Because I want to know which plumber this is. What does he look like? A black guy? No really, I want to know. And who is the plumber who calls him a crackhead? Because he must be a crackhead too if the problems are still not fixed,” Paul laughed.

“You’re trying to get me to say something racist.” I said I wasn’t going to answer with racial or physical descriptions of the workers; the line of questioning, to my mind, didn’t seem relevant or appropriate. Then Paul touted his resume and high position. “I am supervisor for many buildings in Brooklyn and Manhattan. I was here as big super for many years, three different owners I was super. I was the one who fired Bob, because he was caught on camera selling the drugs and sleeping with prostitutes. So please, from now on, you come to me and I will take care of the problems. I don’t call crackheads for the work. I contract the very best professionals and get parts from Manhattan. I am not like the other supers. I am not Jewish or Spanish. I am Italian, like white guy. Trust me, I am going to fix everything for you right away. But you have to be there at the apartment to let me in.” I said that was fine because I often work from home.

“And, by the way, at some point the new owner, he may want to have a conversation with you about a buyout. $24,000. You will see. He will renovate the place nice, make all the improvements to the whole building. It will be very nice, and then if you are interested in a buyout—no pressure—you ask your price. Has to be reasonable, don’t go talking something crazy now. But he will make you a nice offer to leave.”

“What’s in Bushwick for the landlord?”

“Come on! Don’t play stupid. Bushwick is a very hot market. Bars, restaurants, the artists, the hipsters, access to the train. These landlords, you can’t fuck them. They have money and power, are very connected, and know people very high up in Manhattan. They’ve done the research and know what’s coming. The owner can make everything nice and charge more rent. It’s business. I walk a fine line between pleasing you the tenant and pleasing him, my boss.”

“What about the low-income families who depend on the rent stabilization?”

“He’s going to offer them more money, because they are paying obviously much less than you are paying. How much you pay?” I told him. “See, they pay a quarter of that. But they can stay if they want to. You can stay. When I get done, you will like the apartment. I will make it luxurious for you. But please, no more calling HPD or 311. Very expensive for me. You come to me, okay?”