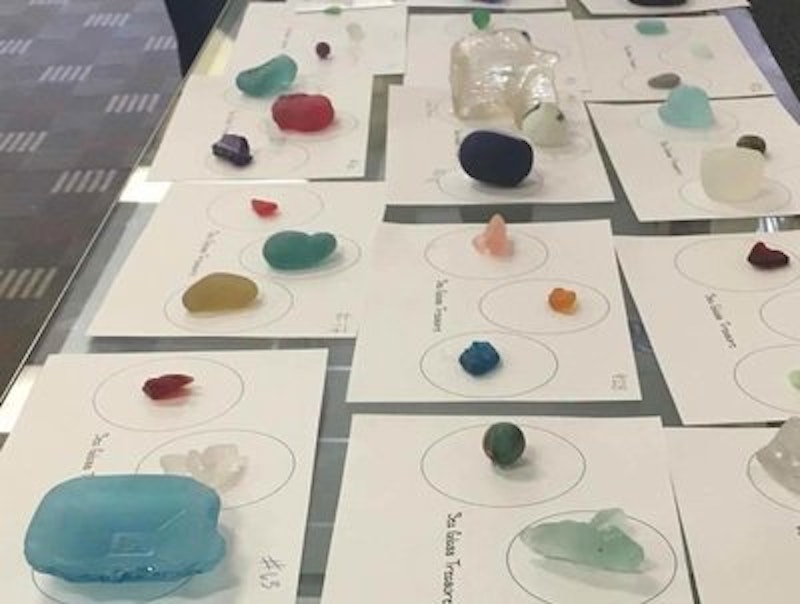 Judging two sea glass contests, East Coast and West Coast, over the last month was quite an experience. At the first, the North American Sea Glass Association festival in Ocean City, Maryland, there were over 600 entries and I learned a lot about the process from observing the other judges. The time frame is narrow, so selecting winners in 11 categories from pottery to historical to art glass, figural, whimsical and more is a challenge for the pool of judges. In order to fairly review the entries, next time I'd spend several more hours in the room as the pieces come in. After the other judges left the room, I was still giving out colored stickers, just to let collectors know their pieces were appreciated. So many great finds, not enough prizes. In Santa Barbara last weekend, it was the festival’s first contest, so 200 entries and five categories made for an easier process.

What I enjoy most in reviewing contest entries is the pride people have in sharing their most prized finds. It's a blind process, so judges don't know who has entered which pieces: often after the winners have been chosen, beachcombers come up to share stories about their pieces, ask us to help identify them, or in the case of one woman, demand an explanation about why her piece hadn't won anything. (I assured her that it was a lovely piece and that I'd recommended another category for next year that hers might've been competitive in, if not a winning contender).

It's not easy choosing winners. I asked for extra "Honorable Mention" award certificates because going into the contest last weekend, we hadn't known if there would be 50 or 500 entries and with only five categories wanted to be able to acknowledge what, in California, were going to undoubtedly be high-quality entries. And they were. Several years ago back at NASGA, my daughter and I exhibited our personal collection and entered the contest, and when we won two Honorable Mentions it meant a lot to us; I wanted to pass that feeling along to some of the many worthy pieces.

The toughest time I had judging both contests was the marble category. Since I’d given a sea marble lecture at both conferences, judges on both coasts sought my input. Having studied marbles didn’t help, it just meant I was overly enthusiastic about too many of the entries. While I had plenty of opinions about the entered marbles, there were simply so many fantastic contenders that it was difficult to choose any of them. I ended up narrowing the field to three-four on each coast of what I considered the best and let my fellow judges determine their favorites. Any one of them was worthy of the prize.

The overall winners at both contests were easier to choose—there’s usually one piece that just blows everyone’s collective minds: the honey-colored patterned bead in California, the tiny perfect purple stopper in Ocean City.

Are you going to enter an upcoming sea glass contest? Here are a few pieces of advice: enter multiple pieces, look for some of your finds that make them stand out from other plain-shaped or colored pieces—remember, they’re going to be competing against hundreds of others. Look online at photos of winners from previous sea glass contests at NASGA, Santa Cruz (past years) or the festival you’ll be entering to get an idea of the quality and style of the pieces the judges chose in the past.

Probably the most significant discovery between the two contests was fake sea glass. It was unfathomable to us as judges that anyone would enter fakes—the rules are very specific that pieces must be personally beachcombed. Yet on the east coast we were faced with a number of clear fakes in the contest, while on the west coast there weren’t any. It seemed like someone was trying to fake out the panel of east coast judges in order to win a prize. They failed.