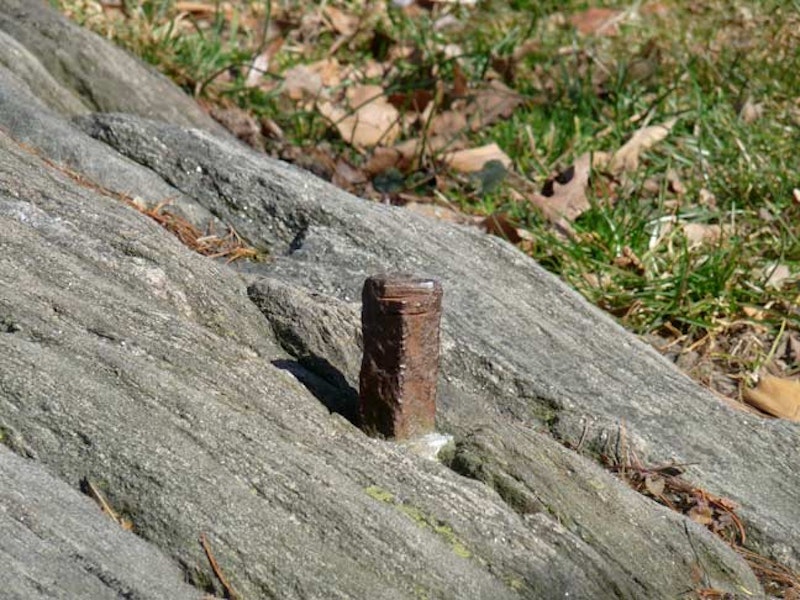 By the first decade of the 19th century, New York City was beginning to outgrow the small area at the tip of Manhattan Island that had defined the city limits ever since a permanent European settlement was established in 1625, give or take a year. The rest of the island was divided up among landed gentry and farmers, and traversed by country roads. There were hills, some of them high; boulders and rocks, some of them iceberg-sized; and streams and ponds.

In 1807 the city petitioned the state for permission to expand and come up with a city plan. A group of commissioners decided a grid street plan was the best way to go—other cities such as Philadelphia and Savannah had adopted successful grids. And, other than the area around the Battery, Manhattan had already developed along a rough grid.

The commissioners drew up a map beginning in 1807 that looked like a giant waffle iron with neatly composed square or rectangular plots as far north as 155th Street; the mapmakers believed it would take over a century for development to reach that far north. A young surveyor named John Randel Jr. was assigned to formulate a team and formally survey the grid, from North Street (today’s Houston) north to 155th, from river to river.

Randel and his team, using the hand surveying tools of the day, measured precisely the street grid everyone traverses today when in Manhattan, with a few exceptions. Madison and Lexington Avenue are new additions, and small ‘towns’ up-island such as Manhattanville were later incorporated into the grid.

Randel’s team roved the island, through thick brush, rock outcroppings, and avoided the occasional angry watchdog or charging bull. By 1811 his survey was complete, but then came the actual mapping and surveying job, done over the next 10 years. 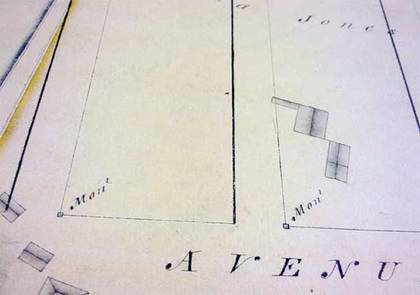 A meticulous hand-drawn survey map was prepared, indicating everything on the surface of Manhattan island—what few existing roads there were, houses and rocks (some were in planned roadbeds and would have to be moved or destroyed). When creating such a large survey, the expansion of metal rulers at high summer temperatures were calculated—using longhand math, not battery calculators. Even the curvature of the earth would have to be considered for such a large area.

On the above map note the two squares marked “Mon’t.” Randal’s team demarcated the intersections of surveyed north-south avenues and east-west streets by placing monuments on one of what would be street corners (here, the northeast corner). As a rule the monuments would be three-foot high marble monuments with the street and avenue marked at the apices (a surviving marble monument, found at 4th, now Park, Avenue and East 26th Street while excavations were taking place in the 1890s for the second Madison Square Garden, is on display at the Museum of the City of New York). However, where rocks and stone made it impractical to sink marble, iron bolts were used instead.

Two of these iron bolts, positioned around 1815, are still in place today. 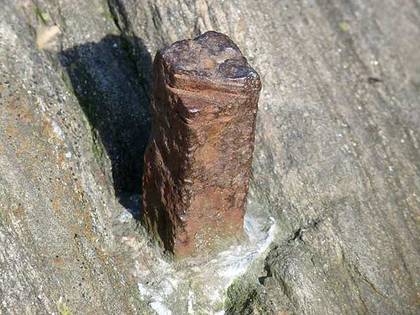 This bolt, installed by Randel’s team, does not bear street markings as do the marble monuments. The only embellishment is the cross at the top, which matches up with the alignment of the street grid. This one has had a chunk taken out of it, probably by a lawnmower—demonstrating the fragility of these over 200-year old objects. 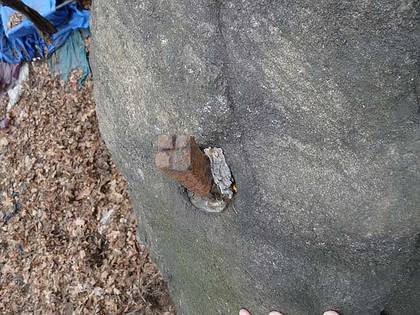 A second such Randel marker bolt has recently been discovered. It, too, is marked with a cross that aligns with the street grid. I’ve also been apprised that there is a third bolt somewhere in Manhattan, but I do not know where it can be found.

Where are they? Both are in public parks that were designed after the grid. The location of the first is somewhat known among cognoscenti. The second, not so much. You’ll have to beat their locations out of me with a wet noodle. Knucklehead souvenir hunters will remove them with acetylene torches.