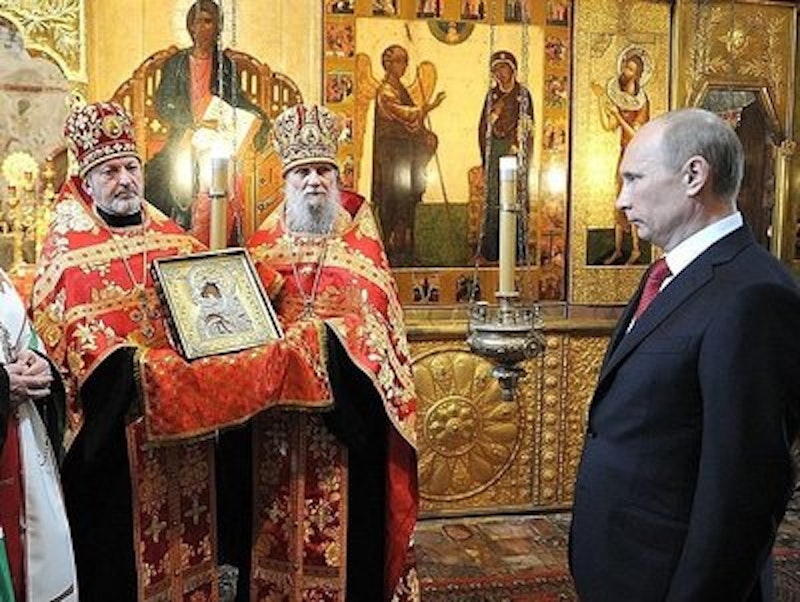 Rod Dreher, my fellow convert to Russian Orthodoxy, is annoyed. In Yekaterinburg, Russia, recently, an atheist got himself arrested for blasphemy for playing Pokemon Go in an Orthodox cathedral. He could face three years in prison. Western liberals are complaining that the blasphemer’s potential sentence is excessive.

At this point Dreher jumps into the picture, agreeing that while the possible sentence is excessive, the reprobate’s punishment has to be seen in the context of the Russian experience. In Russia, after all—this is Dreher speaking—the Orthodox Church was long persecuted by the Soviet leadership, even to the point of murder. It makes perfect sense, then—again, this is Dreher—that Putin’s Kremlin, the Church’s noble defender, would be hyper-sensitive to blasphemy.

Dreher is right that Putin’s Kremlin is Russian Orthodoxy’s defender. He’s also correct that the young crypto-sodomite deserves punishment for his blasphemy. A thousand lashes on the back—in Red Square, in the shadow of St. Basil’s Cathedral—would be even more appropriate punishment for this piece of trash than prison would. So would—yes—a secret policeman’s bullet behind the ear. To hell with him and Western cant about “leniency” and “tolerance.”

But I was talking about Dreher, who in one respect is deeply misguided. That is in his playing of Russia’s Soviet past against its Putinite present. Putin must be stern with enemies of Orthodoxy, Dreher says, because the Soviet regime was so abusive of Orthodoxy.

In fact, there is—happily—an identity between Putin’s Orthodox regime and the Soviets. Putin himself has insisted that there is. One of the many great things about this giant of statesmanship is that he’s embraced his country’s Soviet imperial past, positioning his government as the inheritor of the Glory That Was The Red Tsars.

Yes, he’s criticized the Soviet regime’s occasional excesses. But he has also insisted that Russians take pride in the Soviet empire and its achievements. In, for example, its physical extermination of the nationalist scum in the inferior, non-Russian, Soviet republics; in its geographic reach, which (if you count its client states), extended into the Zionist-occupied territory of Western Europe; in its scientific and cultural achievements.

If the noble Russian people, solidly Orthodox as they are, take pride in these Soviet achievements, and in their Soviet past, why doesn’t Dreher? Does he know better than actual Orthodox Russians? Maybe he should go to Moscow and lecture the pious Orthodox people there about the contempt in which they should hold their country’s own history.

I understand where Dreher is coming from. Like I did, he grew up in a jingoist/McCarthyite America saturated with hatred of the Russian Empire of the Red Tsars. It’s time for him to “move on,” to use one of the locutions of our mongrel America. A poll of Russians not long ago indicated that they consider Stalin the third-greatest Russian of all time—and there were suspicions that the poll was rigged to keep Stalin (who was an Orthodox seminarian) out of first or second place. Is Dreher more Orthodox than these Russians?

If the Soviet Union, Lenin, and Stalin are good enough for Putin, one of the greatest figures in Orthodoxy, and for Russian-born Orthodox believers, they’re good enough for Dreher. He should stop using Holy Orthodoxy as a stick with which to beat the Russian past.

Glory to God! My adolescent daughter shows signs of having been cured, finally, of her lusty passion for self-pleasure, that crime against the Trinity and against Virgin Mary, Theotokos! I will relate the story of this providential development in next week’s diary!