A close-knit community in Carroll Gardens. 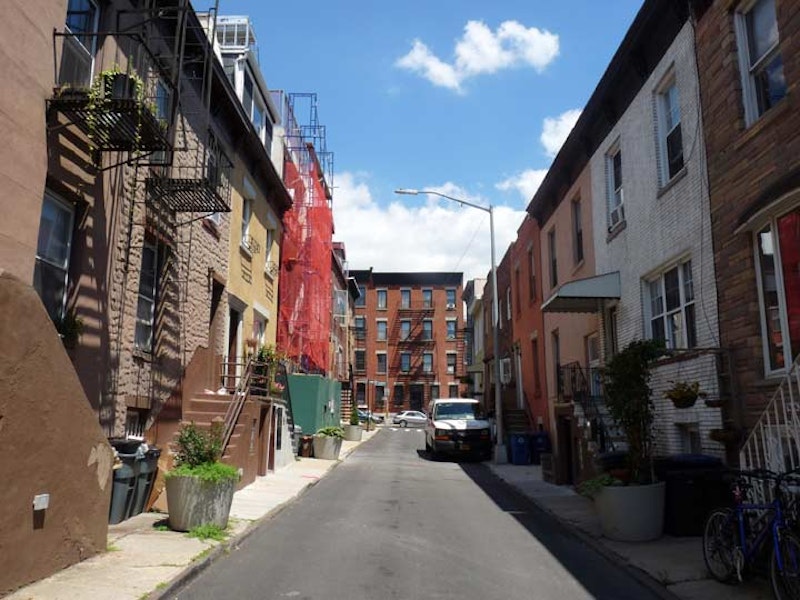 In New York City, alleys are relatively infrequent. Much of Manhattan, and the five boroughs, is laid out to a checkerboard grid. It’s especially prevalent in relatively flat areas, such as midtown Manhattan and in Bedford-Stuyvesant, Brooklyn, but even in relatively hilly areas, city planners strove to tame those areas with a strict gird with X-axes like 5th Avenue and Y-axes like 34th or 42nd Streets. Occasionally, there will be a diagonal path cutting across the grid, and most often those exceptions are colonial-era roads or Native American trails that have been grandfathered in to the plan.

Much older parts of town, such as Lower Manhattan, have streets that correspond to original topography and streets wind around hills that have since been leveled off, or describe inland waterways. Downtown Boston had streets laid out as a wheel around a central area, but new development over the decades has blunted that effect. Philadelphia was designed on a grid much as Manhattan was. Both those towns, though, have a key difference: They featured a lot more dead ends and alleys, while New York has tended to eliminate its alleys.

Carroll Gardens, Brooklyn, lies south of Cobble Hill and in between the Brooklyn-Queens Expressway and Gowanus Canal. It enjoys quiet streets and parks, and twin restaurant and shopping districts along Court and Smith Streets. It has been home to Italian immigrants and their descendants for some decades. The religious and cultural center in the area is St. Mary, Star of the Sea Church, at Court and Luquer Streets. Behind the church, just west of the F train elevated, is a narrow lane, Dennet Place, full of attached houses that have survived since the Reconstruction era following the Civil War. 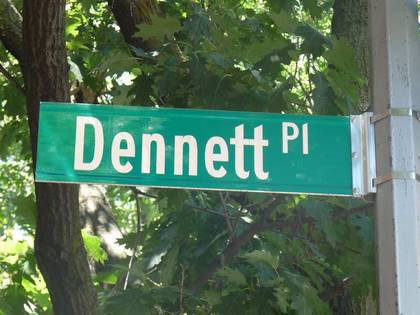 Brooklyn gazetteers and maps have never quite settled on the spelling of both Luquer Street and Dennet Place. In fact, the very pronunciation of Luquer is disputed. Luquer, despite its spelling, has always been pronounced “lu-QUEER” with the emphasis on the final syllable, and a long “e” as if there were two there. So, what gives? Why the strange pronunciation? Over the years, street guides and maps have vacillated over the spelling, switching back and forth between Luquer and Luqueer. The oldest references in the Brooklyn Eagle cite an Abraham Luqueer owning property in the area, so we have to assume that was the original spelling, and while the original pronunciation survived, one of the e’s has been sacrificed.

Though Dennet Place appears in city directories as early as 1876, the blogger Brooks of Sheffield found an 1860 map showing the lane as Bennett Place in 1860, and cites the early immigration of the Bennett family from New Amsterdam in the 1630s. The Bennetts were fascinating, as they were a British family living in Holland before William Adrianse Bennet arrived. Several of Gravesend’s older buildings, both existing and razed, were owned by the Bennetts.

Over the years, handwritten transcriptions may have altered the spelling. A capital B could easily become a D. That may be what occurred here. It’s not unprecedented because in Williamsburg, there’s a group of streets named for signers of the Declaration of Independence; among them is Keap Street, which was named because a long-forgotten office employee mistook a scribbled “McKean” (for Thomas McKean of Pennsylvania) and rendered it as Keap, and the street got that name when it was laid out in the early 1800s.

Even the Department of Transportation gets it wrong because the signs installed at Nelson Street add an extra “t” to Dennet. Older signs at Luquer Street have just one “t.” 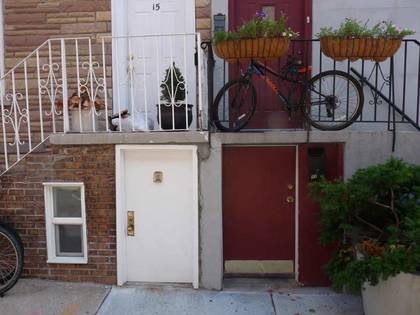 Dennet Place is lined with small, two and three-story attached houses, some with dormers, some without. They are arranged in groups of two, with a double staircase in the middle serving each. Below the stairs, each house has a miniature door, most about 4 feet in height. The doors lead to basement apartments and the short doors accommodate steps going down. According to The New York Times, the local families call it “Cat’s Alley,” but the origins of that name, or the origin of the miniature doors, are lost in the fog of time and can now only be speculated about. Perhaps there were stray cats around, or a Katz who lived there long ago.

It’s likely that Bennett Place, later Dennet Place, was built to accommodate workers building Mary Star of the Sea. That too is not unprecedented, as workers’ housing for the Steinway Piano factory in Astoria and the Lalance and Grosjean cookware empire in Woodhaven can still be located.

While NYC is short on alleys, the ones it has are rich in lore and fun to speculate about.