From Ye and Herschel Walker to Fetterman and Pelosi, politics is grossly inflamed. 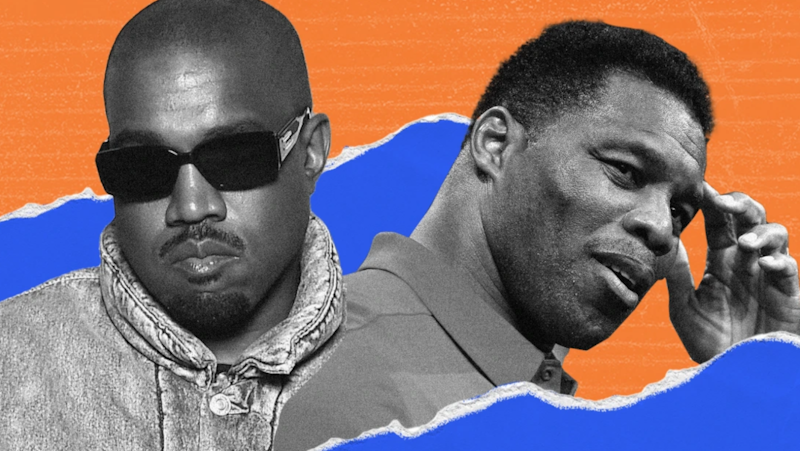 They say judge not lest Ye be judged, but I’m comfortable judging Ye—and several other prominent, politicized figures who, tragically, seem insane. Luckily, I’ve long since overcome the reflexive tendency to think that if Person or Team A is nuts, Person or Team B should be defended. It’s terrible in all directions. Fringe thinking such as Ye’s anti-Semitism is awful, but do you really want to embrace mainstream thinking when the mainstream produces say, the Moloch-taming crystal-worship ceremony that opened the Commonwealth Games?

(I wonder, incidentally, whether Ye’s vague threat to go to Defcon 3 was an allusion to Henry Kissinger encouraging the U.S. to go to Defcon 3 in defense of Israel during the Yom Kippur War 49 years ago in case Russia entered on the Arab side. Ye’s complaints, while irresponsible, may have deeper geopolitical roots than is at first apparent—but given liberals’ habit lately of pooh-poohing nuclear war risks in Ukraine, there’s probably little hope of convincing them war is an even more pressing issue than bigotry.)

Similarly, we can all agree that David DePape, who attacked Speaker of the House Pelosi’s husband Paul with a hammer in San Francisco and likely caused some brain damage, is a terrible, destructive person whether he’s a right-winger, gay-commune-dwelling left-winger, or deranged homeless person, per conflicting reports—but none of that need cause us to think highly of Atlantic and Daily Beast contributor Molly Jong-Fast, child of Erica Jong, who appears to have blocked me on Twitter merely for saying it’s interesting to see brand-new Twitter CEO Elon Musk sparring (in a since-deleted tweet) with Hillary Clinton over whether the truth is yet known about the Pelosi attack. Each faction seems to want the next silenced.

What’s truly brain-damaging, then, is not so much that the Jongs, Musks, Clintons, DePapes, Wests, or Windsors of this world have some stupid ideas but that so many of us have fallen prey to the delusion that there must be at least one smart, sane faction among them, a faction worthy of ruling—and sometimes punishing—or at least advising all the others.

Don’t let next week’s elections dupe you into thinking you must downplay the mumbling of liberal John Fetterman or spin the rambling of conservative Herschel Walker and then choose someone, anyone, lest you be left behind by the democracy parade. You don’t have to pretend any of these public figures are sane or worthy of support—any more than you’re obliged to cast a vote for demented Joe Biden or demented Donald Trump. (I concede it’s slightly encouraging to see possible-next-governor of New York Lee Zeldin playing chess well in his spare time, but I refuse to let it get my hopes up.)

The problem isn’t a few demented idiots finding their way into an otherwise pristine political process called democracy but rather democracy itself: the baseless contention that if we’re coaxed to support “leaders,” they’ll make decisions so wise that we’ll barely mind that they, not us, control our lives. Giving them the power to think for us—such a vast, diverse array of us—is a formula for stupider thinking.

This is a damning flaw even before we start examining all the deviations from ideal democratic process that occur in every election (forgive me if I’ve lost track of whether the dominant political faction at the moment thinks our elections are being hacked or are the most secure possible, depending on whether they appear to be winning).

Asking whether past elections have involved erroneous vote counts is now considered so taboo by the establishment that I doubt I’ll live to see any serious discussion here in New York of whether, say, it’s unhealthy for the official government poll-workers to get around the requirement of having at least one observer from each of the two major parties by agreeing to have a few of the leftist City employees register as Republicans just for formal poll-working purposes (not that I can blame people seeking workarounds for coping with bureaucratic rules).

In so many ways, we live amongst crazy people struggling to navigate an even crazier system. It’s enough to make one sympathize with those self-appointed guardians of rational centrism, the CIA. That’s how they see themselves, after all, whether they’re rigging elections overseas or running a wave of young congressional candidates here in the U.S. just a few years ago, all no doubt eager to prevent more intel-sector-hating populists like Trump from winning.

They must now be rooting for former CIA man and failed former presidential candidate Evan McMullin to pull off a come-from-behind victory next week in Utah against Senate incumbent Mike Lee. McMullin, beloved by some of my Washingtonian acquaintances, became an Independent recently and could end up with a deciding vote in a 50-49 Senate, determining which party dominates by picking with whom he will caucus. Maybe his highest priority as a Senate kingmaker would be bolstering democracy—maybe that was the highest priority of all his young intel colleagues who ran for office in a (mostly losing) boomlet—but it’s fair for us to wonder whether he’d take a special interest in the intelligence budget.

McMullin was booed during a recent debate against Lee for saying Lee, as a Trump supporter, betrayed the Constitution, but I think we’re allowed to fear that the intelligence sector potentially deciding the balance of power in the Senate is also a threat to the constitutional order. The smart guys are harder to see coming than some of those addle-pated dopes I mentioned above and thus often more dangerous.

It’s odd by late-20th-century standards that a politician as chummy with Democrats as McMullin is now cheered on by the intelligence community. But then, it’s odd too that one of the best hopes for shrinking the military-industrial complex right now may be right-wing military veterans running for office who are ardently antiwar—another odd little congressional-race boomlet I wouldn’t have anticipated back in the 20th century.

Viewed as a faction, they may be one that started out just as crazy as everyone else, but it seems they learned from brutal and traumatizing experience, one of the most important ways humans learn. Rooting for some of them next week, if you must root for someone, may not be completely crazy.