You can’t go anywhere this time of year without bumping into a pumpkin. 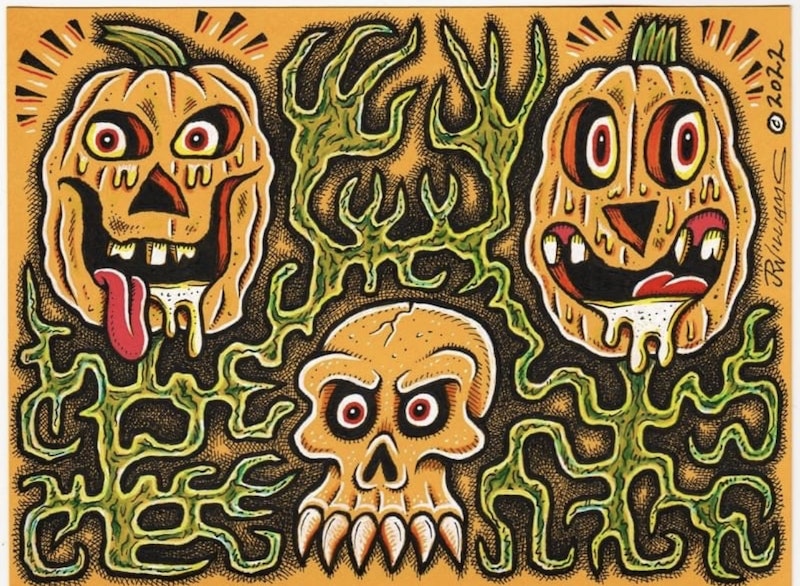 There’s a 19th-century poem penned by James Whitcomb Riley, titled “When the Frost is On the Pumpkin.” The first lines are, "When the frost is on the punkin’ and the fodders in the shock.” What the hell does that mean? I discovered the line, in an old English roundabout way, proclaims it’s getting cold outside. Frost on the pumpkin is a sure sign of an early freeze and all the corn stalks are bundled in the fields, or fodders in the shock as Riley preferred. It must be fall again. Funny how that happens every year. Living in temperate zones allows experiencing all four seasons of yearly climate change. And the autumnal season is always announced by beautiful fall foliage and the arrival of lowly orange pumpkins.

You can’t go anywhere this time of year without bumping into a pumpkin. Those weird suckers are everywhere. Some say pumpkins are of the gourd family, or squash cousins, others say vegetable. Arare few say the pumpkin a fruit because it bears a flower. I’m no botanist, but I agree the pumpkin could qualify in all three categories. The history of the pumpkin in American lore and fable is filled with tales, ordinary and bizarre. There’s nothing scary about pumpkins, but somehow they got caught up there with witches, ghosts, vampires, monsters, and goblins.

You can’t drive down a road 50 feet without seeing a pumpkin or spotting too many on a front porch oralong the steps in somebody’s yard. They’re for sale along every rural roadside. You may see them smashed in the middle of a road or along a stretch of sidewalk. A childish prank perpetrated by mischievous kids, trick or treating revenge. Could be an angry loner who’s suffering from pumpkin fatigue. Carving faces in too many pumpkins. An exhaustion brought on by pumpkin psychosis. Pumpkin-spiced coffee, pumpkin-scented candles, pumpkin-themed fashion accessories and pumpkin pie with a dollop of whipped cream. I turn into a pumpkin after midnight on All Hallows Eve and a Turkey on Thanksgiving Day. It’s pumpkin abuse.

Pumpkins are so maligned. A pithy retort to the original, frost on the pumpkin poem connotes unusual sexual undertones:

“When the weather's hot and sticky, That's no time to dunk the dickey.

When the frost is on the pumpkin, That's the time for dickey dunking.”

That sounds perverse, unless you happen to be named Dickey Duncan. Then it’s your time to shine, baby. The harvest is over and done, as the autumn sun shines low to the horizon, casting a brilliant light on the landscape. It’s prime peeping season here in the Northeast. There’s a lot of melancholy and sentimental reminiscing around this time of year. It’s a time to procreate. There’s more than a little dickey dunking going on for those who can still be fruitful and multiply. It’s a sexy season for some, but mostly a scary one for others. Especially kids and old people who are frightened by their shadows. There’s really nothing creepy about pumpkins. Just don’t molest any. Sex acts with fruit and vegetables is really pushing it.

It’s The Great Pumpkin, Charlie Brown, the 1960s cartoon with a message. The premise that the character Linus is waiting in his pumpkin patch for the Great Pumpkin’s arrival on Halloween, missing out on all the fun parties. He believes he has the most “sincere” pumpkin patch, and he’ll be chosen for the best, most sincere pumpkins. It’s an exercise in the futility of faith, or the search for meaning in a faithless world. An offbeat take on Waiting for Godot, but a bit too saccharine. Charlie Brown is a manic depressive. His gal pal Lucy is a yenta who’d star on Real Housewives of Cartoon Town. Peppermint Patty is the first cartoon LGBTQ rep. Pigpen is that back-to-nature sort of fellow, cloaked in the dust of countless ages. Snoopy’s a philosophical buffer for life’s biggest questions. Franklin, the token black kid, was introduced in 1968 as an empty offering of skewered symbolism and hollow gestures for racial strife and turmoil. The Peanuts gang was one big dysfunctional sterile stereotype of 1960s youth culture options run amok in a cartoonish dystopia.

Stefano Cutrupi holds the world record for the heaviest pumpkin. Cutrupi, from Italy, grew a 2702 pound pumpkin last year according to Guinness World Records. At the opposite end of the pumpkin spectrum, we have The Legend of Sleepy Hollow. A yarn about a headless horseman who rides through the countryside, terrorizing villages. In lieu of a head, he wears a pumpkin, which he throws at hapless victims. A classic cautionary tale about the past haunting the present as superstition plagues our imagination. Like the peculiar pumpkin, so misunderstood.