How Halloween Preserves Our Ancient Beliefs 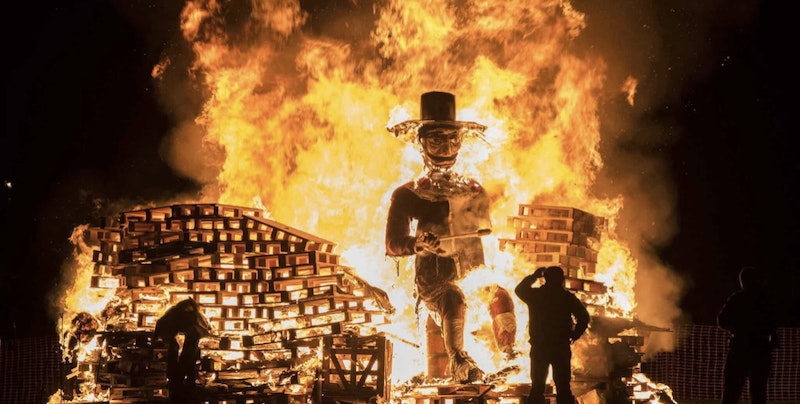 In a recent post on the Canterbury Residents group on Facebook someone wrote: “You all need to pack it in with this Halloween nonsense. We are not Americans we are British for gods sake. (Sic)”

This led to a lively discussion on the origins of Halloween. As a number of people pointed out, this lies in the Celtic festival of Samhain—“Summer’s End” —which took place on the same date. It was the Celtic New Year, marking the end of the harvest season and the beginning of the dark half of the year. Historically it was observed throughout the Celtic fringe, in Ireland, Scotland, Wales, the Isle of Man, Cornwall, and Brittany in the North of France. Some Neolithic passage tombs in Ireland are aligned to the sunrise on Samhain. Traditionally large bonfires were lit and the cattle brought down from the summer pastures. The souls of the dead were thought to revisit their homes and an extra place was laid at the table. People would wear disguises and go from door to door reciting stories in exchange for food. The festival has been adopted by the neo-pagan community as one of the dates in their Wheel of the Year calendar.

In England, however, it largely died out, replaced by Bonfire Night, which has a specifically political origin. Bonfire Night is a celebration of the failure of the gunpowder plot of 1605, when a group of English Catholics, led by Robert Catesby, attempted to assassinate James I by blowing up the House of Lords during the state opening of Parliament. One of the members of the group was Guy Fawkes, a radical Catholic who had fought in the Eighty Years War on the side of the Spanish. In memory of this a stuffed effigy would be burnt on the fire, which we called a “guy.” It’s from this that the American term guy, meaning man, derives.

The word "bonfire" may be a reference to "bone-fires," the burning of animal bones sacrificed to the gods in celebration of the turning seasons. Animal bones are full of fat and would sizzle and crack before they exploded. This would’ve been the prehistoric equivalent of a fireworks display, sending dangerous hot sparks high into the night air to mingle with the stars, and bone-shrapnel into the crowds.

There are two major festivals in the UK celebrating Bonfire Night: one in Lewes, in East Sussex, and the other in Bridgewater in Somerset. The two festivals come from either side of the political/religious divide. The one in Lewes is a celebration of the failure of the plot, in which an effigy of the pope used to burn. Today they’ll burn effigies of other reviled characters who’ve been in the news. The Bridgewater event begins on “Black Friday,” the nearest Friday to November 5. The story goes that there were beacons set up across the country and that one of these was lit accidentally, which led to the people of Bridgewater, overwhelmingly Catholic at the time, believing that the plot was a success. Black Friday marks their disappointment on hearing the truth, in memory of which the pubs are kept open all day. Both festivals involve lots of fire and danger, but the Bridgewater event culminates in a carnival procession which weaves its way through the West Country towns in succeeding weeks. Both festivals are worth a visit. Bridgewater Carnival is one of the largest illuminated parades in the world.

Bonfire Night has become internationally famous since the release of V for Vendetta, the Hollywood interpretation of the Alan Moore comic series set in a dystopian England of the future. The Guy Fawkes mask that the central character wears has become the symbol of the anti-capitalist movement, adopted by Anonymous, the international hacker group known for launching cyber-attacks against governments and corporations. There’s an annual Million Mask March which takes place on November 5th, mainly in London and Washington. In London it goes to the Houses of Parliament. So far, they’ve rarely managed to gather more than a few thousand people to the demonstration. In London in 2016 there were 53 arrests.

Halloween became repopularized in England after the release of E.T. the Extra-Terrestrial, whose culminating scene takes place on Halloween night. The irony is that ET had to be disguised to attend the festival, whereas now he could come as himself, as ET is one of the most popular disguises. What this means in the UK is that Bonfire Night has turned into a fortnight-long festival, with fireworks displays, bonfires and all the other accoutrements of the season taking place from the weekend before Halloween till the weekend after November 5th. What both of these examples also show is the way popular culture and Hollywood feed into each other. Festivals become films, which become festivals again. Fiction becomes life which becomes fiction. It’s a never-ending cycle.

What is true about that Canterbury resident’s complaint is that the English version of Halloween is tacky and cheap compared to how it’s celebrated in other parts of the world. The English don’t know how to do it properly. In Catholic countries it involves a loving reverence for the graves of the dead, which are swept and cleaned on Halloween night, with fresh flowers laid, and a solemn all-night vigil undertaken, to remind themselves of their mortality. The English fill the season with plastic effigies of skeletons and fake blood, and the kids have no idea what Trick or Treat entails. They rarely have a trick prepared, although there’s a ban on the sale of flour and eggs to children over the period in case they set about egging people’s front doors.

To me Halloween represents the celebration of the change in the season. It’s when the nights are drawing in and the leaves are falling. There’s the smell of ripe fruit and fermentation, rotting leaves and mushroom spores. Some of the mushrooms have psychedelic properties, which can induce a sense of Otherness. Seeing the full moon caught in the branches of a bare tree high on mushrooms at this time of year is probably the best way to enjoy the meaning of the season. The veil between the worlds has lifted and the fairy-folk take their ride.

The greatest evocation of what Halloween truly means is the ancient Scottish ballad of Tam Lin. There are some beautiful renditions available on YouTube, including this one, by Steeleye Span, and this one by Fairport Convention. The story takes place on and around Halloween. A young Scottish noblewoman, named Janet, goes to Carterhaugh where she plucks a rose. A sprite called Tam Lin pops up, complaining that she should ask his permission before stealing his roses, but Janet tells him that the land belongs to her father and that she needs no permission. She loses her virginity to this otherworldly creature, who takes her into a bush. Later her father guesses she is pregnant. He asks who the father might be and she tells him that it’s no earthly knight but an elfin being who’s the father of her child.

She goes back to Carterhaugh where Tam Lin tells his story. He was stolen by the Queen of the Fairies at the age of nine, he tells her, and has been living in the nearby hill ever since. As a fairy he has magic powers, but fears his time may soon be up.

“Then would I never tire, Janet,

In Elfish land to dwell,

But aye, at every seven years,

They pay the teind to hell;

And I am sae fat and fair of flesh,

I fear 'twill be mysell."

He gives her instructions on how she might free him from the spell.

“This night is Halloween, Janet,

And if ye dare your true love win,

Ye have nae time to stay.

The night it is good Halloween,

When fairy folk will ride,

And they that would their true-love win,

To Miles Cross they must bide.”

How will she recognize him, she asks? She’s to wait at Miles Cross till the fairy ride passes by. She must ignore the first company and wait for the next. Then she must ignore the black horse, and the brown horse, and wait for the white steed as it passes by. She must lay hold of the rider and bring him down and not let him go. A series of magical transformations will occur. He’ll become an adder and then an asp, and then a burning lump of coal—which she must dip in first in milk, and then in water—and then a toad, an eel, a dove and a swan. The transformations vary, depending on the version of the ballad you’re reading. Sometimes he’s turned into a bear, and sometimes a lion. Finally he’ll turn into a naked man, and she must cover him with her mantle, and hold to him fast.

The Steeleye Span version changes its tone halfway through. It becomes much more eerie at this point. Janet does as she’s told, and the transformations take place. When the Queen of the Fairies notices that Tam Lin is missing the tone changes again. It becomes menacing. Had she known that he’d desert her she would’ve taken out his heart and replaced it with a stone, she says; she would've taken out his eyes and put them into a tree. We know at this point that the Fairy-folk are not benign creatures. They’re living Nightmares who roam the wild places of the Earth on nights of transformation such as this. Their gifts of magic come with a price.

There’s something in this story which strikes me as profound. The idea of a human child being stolen to an otherworldly place at the age of nine has psychological resonances. Life till that age is magical. It’s with the onset of puberty that something fundamental gets lost. This is when the ego takes over and the false self is created. The magical being is buried, stolen by the Fairies, to live a parallel life in another dimension, in another part of the psyche. A kind of living death ensues which is only redeemed by the persistence of love. In some the redemption never takes place. Unlike Tam Lin, who has escaped, their hearts have been turned to stone by the Queen of the Fairies, and their eyes put into a tree.

The story’s about redemption. The transformations show the mutability of the soul, which is never entirely human. We’re made up of many parts, many beings, some of which are primordial in their nature. Janet’s devotion to Tam Lin’s humanity allows him to regain his human form. As an Elf he was capable of changing, but his image was never fixed. This was both his magical ability and his weakness, because it made him subject to the Fairy Queen’s demonic powers. His redemption lies in the arms of his lover, the mother of his child, who must hold to him fast, unafraid, until the final transformation takes place and he becomes a human being again.

The significance of Halloween in the story is that this is when the veil between the worlds has thinned and the worlds of the dead and the living come into the closest proximity. In this sense the Fairies can be seen as ancestor spirits taking their ancient ride across the skies. There are echoes in this of that most ancient and persistent of religions: worship of the ancestors. It’s by answering the call of the ancestors, perhaps, that we may find our true nature.