The Film That Killed John Wayne

Of the 220 people who worked on the film, 91 contracted cancer in their lifetime while 46 people died of cancer. 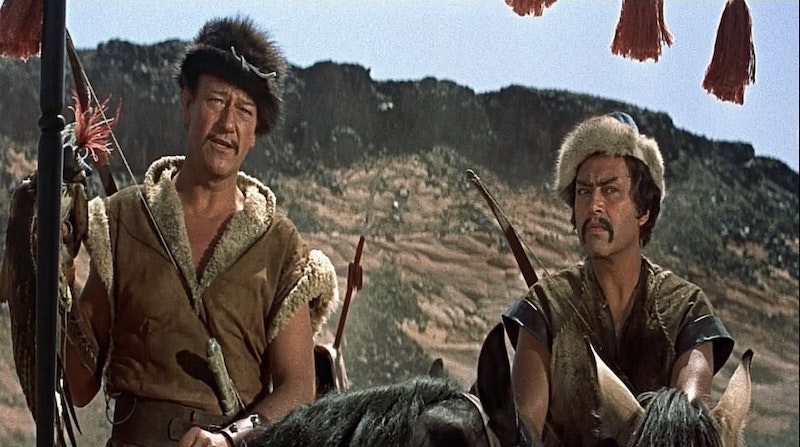 In June 1954, a Hollywood cast and crew flew to Saint George, Utah to make the movie The Conqueror starring John Wayne. The film was directed by Hollywood veteran Dick Powell and produced by Howard Hughes. Wayne played the 13th-century Mongol conqueror Genghis Khan who goes to war with the Tartars over the love of a princess. Of the 220 people who worked on the film, 91 contracted cancer in their lifetime while 46 people died of cancer. Wayne died of stomach cancer in 1979.

Saint George lies in the northeastern part of the Mojave Desert. The area is close to Zion National Park and the Grand Canyon. It’s also 137 miles from an atomic testing range at Yucca Flat, Nevada. From 1951–1963, the US military conducted above ground nuclear tests in Yucca Flat. The US government claims the area poses no health hazard but TIME called Yucca Flat “the most irradiated, nuclear-blasted spot on the face of the earth.”

Howard Hughes took over RKO Pictures in 1948. He developed a reputation for preying upon young starlets and supporting the hunt for Communists in Hollywood. Early films made on his watch were critically panned and fared poorly at the box office. At the time, historical epics like Julius Caesar and The Robe were in vogue. In desperate need of a hit, Hughes gave the green light to a movie about Genghis Khan.

Wayne had one project left on a three-film contract with RKO. The first two movies were awful, Jet Pilot and Flying Leathernecks. Desperate to complete his contract, Wayne read the screenplay for The Conqueror written with Marlon Brando in mind. Wayne loved the script. Director Dick Powell tried to dissuade him from taking the role, but Wayne viewed the script as a western and signed on. The thought of Wayne wearing yellow makeup, slanted eyes and a Fu Manchu mustache was never a good idea. The resulting film is considered the worst movie Wayne ever made.

Hughes was responsible for choosing Saint George as a location. It has beautiful red bluffs and powdery dunes resembling the Asian steppes in Mongolia. Hughes knew the location was downwind of a testing site where 11 nuclear bombs were exploded in 1953 in “Operation Upshot-Knothole.” The largest bombs were a 51-kiloton shot called “Simon” and a 32-kiloton bomb called “Dirty Harry.” Winds carried radiation toward Saint George killing thousands of sheep. The Atomic Energy Commission blamed the sheep deaths on “unprecedented cold weather.” Hughes received reassurances from the AEC that the area was safe. An AEC booklet read: “Your best action is not to be worried about fallout.”

Wayne also knew about the testing. He brought a Geiger counter to location as a joke. During production, temperatures rose to 120 degrees and winds kicked up massive amounts of dust. It was so hot, actors were hosed off at the end of the day. When location shooting was completed, Hughes arranged to have 60 tons of radioactive Utah soil shipped back to the Culver City studio for re-shoots. (The soil was ultimately spread around unnamed industrial neighborhoods in Los Angeles.)

Several years after filming, unusual medical conditions appeared in the cast and crew. In 1960, actor Pedro Armendáriz was diagnosed with kidney cancer. After learning his condition was terminal, he died by suicide. In 1963, director Powell died at 53 of lymphatic cancer. Actress Susan Hayward contracted skin, breast and uterine cancers before dying at 56 from brain cancer. Actress Agnes Moorehead died of uterine cancer at 74. Actor Lee Van Cleef died of throat cancer at 64. Actor John Hoyt died of lung cancer at 86. Wayne spent years fighting cancers of the lung, throat and stomach before dying at 72. He blamed his long-term smoking habit.

Family members of the crew who visited the set also had cancer scares. Two of Wayne’s sons, Michael and Patrick, visited their father in Saint George. Michael developed skin cancer while Patrick had a benign breast tumor removed. Both survived. Susan Hayward’s son survived a benign tumor in his mouth. By 1980, 41 percent of the cast and crew developed cancer while 21 percent of them died from cancer.

Dr. Robert C. Pendleton, director of radiological health at the University of Utah, believed the radiation in the area was tied to the cancer deaths from those working on the film. “With these numbers, this case could qualify as an epidemic,” Pendleton said. “The connection between fallout radiation and cancer in individual cases has been practically impossible to prove conclusively. But in a group this size you’d expect only 30-some cancers to develop. With 91, I think the tie-in to their exposure would hold up even in a court of law.” No statistics exist for the hundreds of Native-American extras who worked on the film.

In the 1970s, the leukemia rate in Saint George was five times higher than the rest of Utah. Thyroid cancer cases in children were also higher in Saint George. Those affected came to be called “Downwinders.” In 1979, Massachusetts Sen. Ted Kennedy sponsored a bill called the Radiation Exposure Compensation Act. President George H.W. Bush finally signed the bill into law in 1990. This provided amounts between $50,000 and $100,000 to people suffering from cancers determined by the National Cancer Institute to have “developed after exposure to low-level radiation.” By 2018, more than 34,000 claims were approved totaling over $2.2 billion.

In his later years, Howard Hughes felt guilty for subjecting the crew to the toxic land in Utah. Hughes was spared cancer himself but spoke out against nuclear power before his death. In 1957, he spent $12 million purchasing every copy of the film to take it out of circulation. He watched the movie often in the weeks before his death in 1976. In 1979, Universal Pictures purchased the film from Hughes’ estate and made it available on video.