Visiting some of the Santas dotting Bay Ridge, Brooklyn. 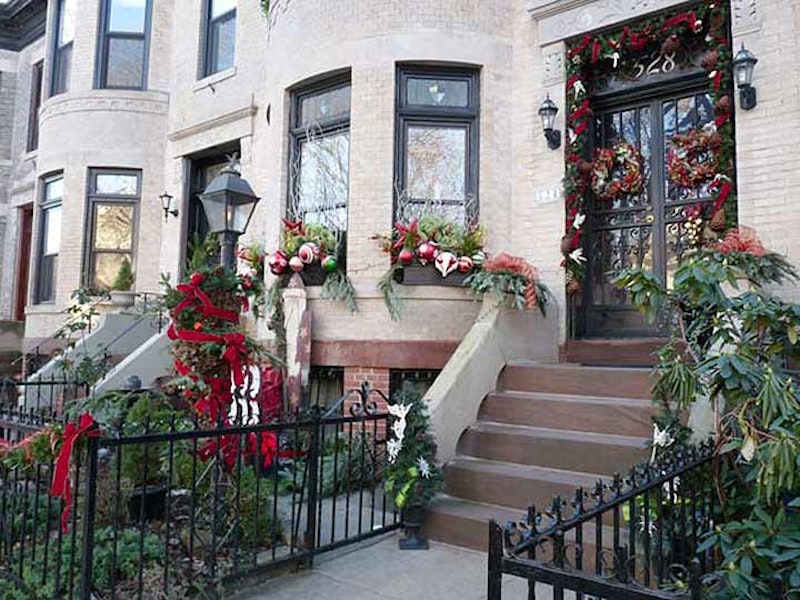 I’ve no intention to Dylan Thomas you, or even Greg Lake you. I decided, after a recent tour of the Brooklyn Army Terminal on the waterfront, to have lunch at a longtime favorite spot and then walk through Bay Ridge to the N train at 8th Ave. and 62nd St. The sun came out and, seeing the Bay Ridge collection of Christmas decorations, much more lavish than those in Little Neck, I wasn’t exactly seized, but affected, by some nostalgia. A deadly condition.

When I lived in Bay Ridge for my first 35 years, I appreciated the neighborhood. I had a number of favorite streets such as 76th between 5th and 6th Aves., shown here. My favorite blocks were characterized by groups of attached buildings divided into apartments with either rounded or squared-off bays in the front. These allowed the occupants a view up and down the street.

The owners of this building have tricked it out generously with Christmas decorations. I used to visit the lavish displays in midtown Manhattan and in nearby Dyker Heights, where the neighbors compete about how big an electric bill they can run up. Those displays now remind me of unlimited wealth, so I tend to avoid them in favor of more modest Christmas decor. This house, incidentally, features an electrically-powered  gaslight in front of it, as do a number of houses on the block. There are still hundreds of these around town, but only a pair of original poles that carried gaslights on public streets. 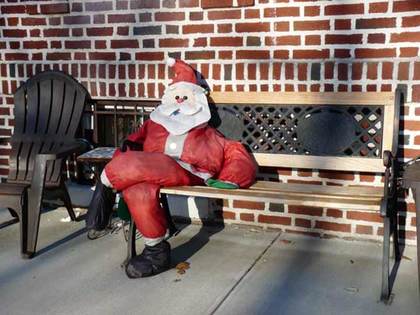 My childhood was long ago, but I remember snatches here and there. In my home it was my father, mother, maternal grandmother and me. Most years, a shipment of oranges would come in from my mother’s relatives in California. Christmas cards from California relatives always referred to my grandmother as “Doc.” I’ve never discovered why the nickname was bestowed. My grandmother passed away in 1977, and I’ve lost touch with my mother’s side of the family since then. This, I suppose, is my “Rosebud.” 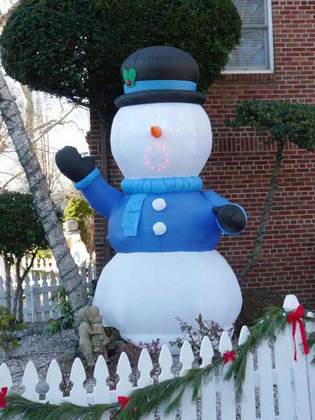 One of the fondest memories of Christmas was the silver aluminum tree with a color wheel we used in the 1960s. We were all fascinated with the colors and would turn off the other lamps in the room and stare at it. I was a nearsighted as early as age seven, and I’d take off my glasses and get a fascinating image of colors blurring and blending. 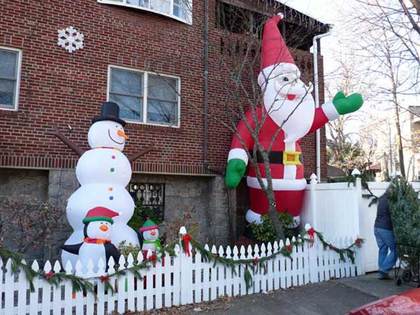 At my grade school, St. Anselm, the chief joy for me around Christmas time was vacation away from it, but kids would all get a plastic see-through candy cane filled with M&Ms as a gift. Most of the J-shaped part of the canes were red plastic, but occasionally there would be a white version, and I tried year after year to get one of the white ones. 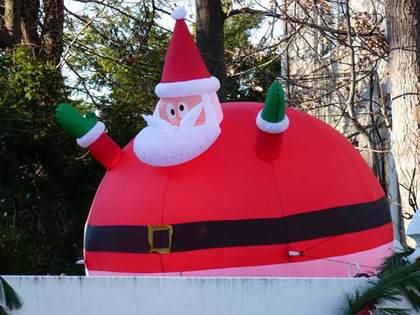 (Gosh, Santa is the fat man in the red suit, but this is Bouncing Boy fat. This guy isn’t getting down a chimney anytime soon.)

Our house had, I think, one of the first color televisions in the building and one of the first in the neighborhood. Our new Zenith was unveiled on Christmas Day 1966, a banner year (we had had half a foot of snow the previous day, making it look a lot like Christmas). For days, what I thought was the old black and white Philco was covered behind a canvas covering, and my inquiries were met with various obfuscations.

One old Calvin & Hobbes cartoon has Calvin’s Dad stating that the world turned color in 1966. For me that was the truth, as a previously drab TV world became magical. Who knew that Jeannie’s harem girl outfit was pink, or that the guys in the red shirts got killed on Star Trek?

In the early days of color TV, constant adjustment of the knobs was necessary from channel to channel, unless you were okay with Jeannie having a green face. There was the same trouble with vertical hold and snow as the Philco, and every so often, Mr. Linn, the local TV repairman, was summoned with his case full of tubes to replace one that had blown out. Years later, when I had my own place, I purchased one of Mr. Linn’s old refrigerators, and there was the spectacle of me, my landlord and Mr. Linn, who was 80 by then, pushing the fridge up four flights of steps. I took the by 16-year-old Zenith with me as well, but when the picture started zapping in and out, I suspected a fire danger and finally retired it. 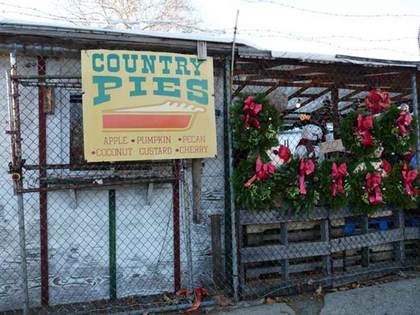 My place was a railroad flat at 7th Ave. and 73rd St. I spent eight years there and though the place was drafty, I could see the Verrazano Bridge out the back room window in the winter and the Williamsburg Bank tower (now One Hanson Pl.) from the roof.

This place was on the cusp of Bay Ridge and Dyker Heights. I could get groceries from both 5th Ave. and Fort Hamilton Pkwy. I was asked out because the landlord wanted my apartment for his daughter; I could’ve stayed and fought for it, but I’m not into these kind of battles. Unfortunately it wasn’t until I moved out in 1990 that this Christmas specialty shop set up at 7th and Ovington Aves. My parents and I would often frequent similar shops near our old 6th Ave. home. This place even has homemade, or “artisanal” pies as a side business. When I was on 73rd St. I still kept a small vinyl tree with some of the original tinfoil decorations salvaged from the old man’s place. I still have that tree and the decorations, but they stay in the closet these days. 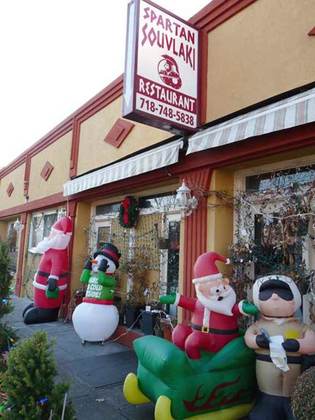 I feel fondness of that 1980s era. I had my own place for the first time, and was working nights in a type shop. I’m very regimented and prefer a daily schedule. The shop, Photo-Lettering, had a Christmas party the first year I was there, 1982, but later saved money by skipping it. As a rule, I’ve skipped Christmas parties most years at other places I’ve been, if I can get away with it, because it felt phony to celebrate with management. A reason is always found to get rid of you eventually.

One more memory. I had my choice of what train to take when coming home from work in the pre-dawn hours to 73rd St. I could take the N to 62nd St. and walk 10 blocks from there, or take the R to Bay Ridge Ave. and walk seven blocks from there. When I took the N train I’d walk across the pedestrian bridge over the Gowanus Expressway at 72nd St., and if you look over the expressway to the south, the beetling hulk of the Veterans Hospital on Poly Pl. rises in the distance. We’d bundle up old magazines and send them over for the veterans recuperating there during the Vietnam War. At Christmas time, I could cross that pedestrian bridge, and see that the hospital, as usual, had hung on its great bulk an array of red lights in the form of a Christmas tree, and I knew I was getting close to home.