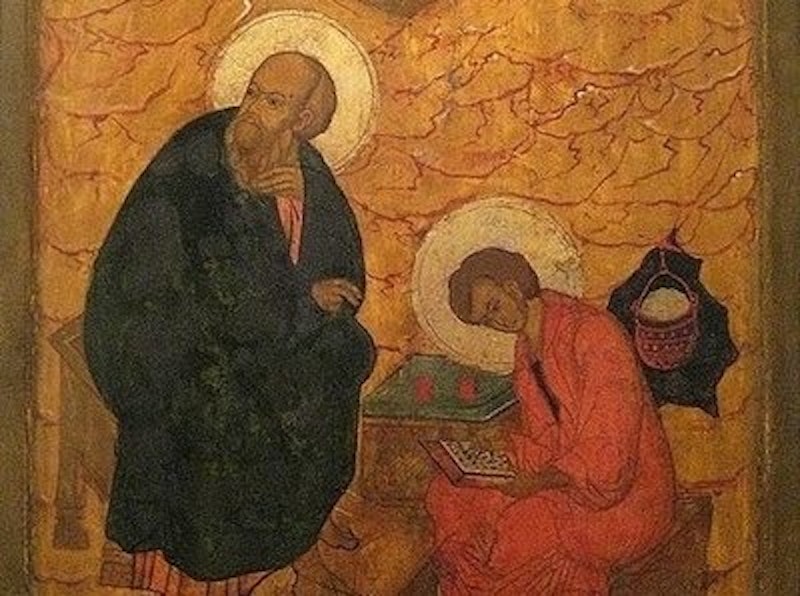 The frost is not yet on the pumpkin here in rural Indiana—but the day comes on which, rising for Father Nicodemus’ matins, we’ll be blessed to see that sign of the season’s change. Autumn cometh, bringing the Advent countdown to the birth of Christ, which we Russian Orthodox of course celebrate in early January. O holy, holy!

The contention that I’m “obsessed” aside, I welcome the reader’s letter. He directs me to look into the life of one of the rare female “holy fools” in the Orthodox tradition, St. Agata the Onanist, Wiper of Sinevo-Tobolsk. This was a wonderful old leper who haunted the Yenisei River region during the reign of Tsar Nicholas I, delighting the local serfs with her bellowing prayers and mumbling ecstasies of public self-exposure.

I’m not sure to what extent St. Agata is relevant to my daughter’s digital exertions, but I’m still grateful to be reminded of her blessed existence. It’s a fine thing to hear from my fellow converts to Russian Orthodoxy—and it’s humbling to learn how much I have to learn of this faith’s rich tradition.

Another reader has “dropped me a line” to object, respectfully, to my recent characterization of American Conservative columnist Professor Daniel Larison as a “successful academic.” In fact, this reader would insist that Professor Larison is not a professor at all—that despite his PhD in Byzantine studies from the University of Chicago, he now apparently holds no full-time academic position.

Startled by this assertion, I took to Google. Twenty minutes of searching seemed to strengthen my correspondent’s position. One “Daniel Larison” does teach, or has taught, history at Elmhurst College in Illinois. But even if that’s the same Larison, it’s still disappointing to those of us who admire the profound Larison—because Elmhurst College is hardly a school in the first rank of the American academy.

To be sure, one might respond that an Anglo-Saxon prince such as Larison—a pious and philosophical convert to the Russian Orthodox Church, Moscow Patriarchate—is better off outside the academic cesspool, if outside he is. (I will be glad to be wrong here.)

True enough, but that simply proves my point. It’s an indication of the decline of the American academy that a Larison—fluent in the range of Slavic languages and intimately familiar with the cultures of the Russian world, not to mention expert in his own academic specialization—seems to find no home at a “name” university. We are talking about a higher education complex that turns cartwheels to cater to sexual deviants; a complex the leading university of which hosts something as morally offensive, fascistic, and absurd as a Ukrainian Research Institute; a complex populated at the highest levels by the most reactionary Zionist neo-cons. And yet, if my correspondent is correct, Larison, of all people—a white Anglo-Saxon of pure Old American stock—can’t find a real academic job.

I’ll return to this topic soon, as it sheds light on two baleful tendencies in American life today: the pervasive anti-Russian racism of our cosmopolitan elite, and that same elite’s general war against this country’s indigenous white Anglo-Saxon population.

Glory to God! This Sabbath, the twelfth after Pentecost, we celebrate the Synaxis of the Saints of Nizhny Novgorod and the Beheading of the Blissful Prophet and Forerunner St. John! In addition, we venerate Orthodox soldiers murdered on battlefields by, among others, Nazis, Latvians, cross-dressers, and other minions of the Infernal Arch-Sodomite!

Loud will our voices rise in prayer over the russet fields outside our Hoosier mission church! Let us venerate the Lord!