When I Joined the Beatles

In a Hamburg basement. 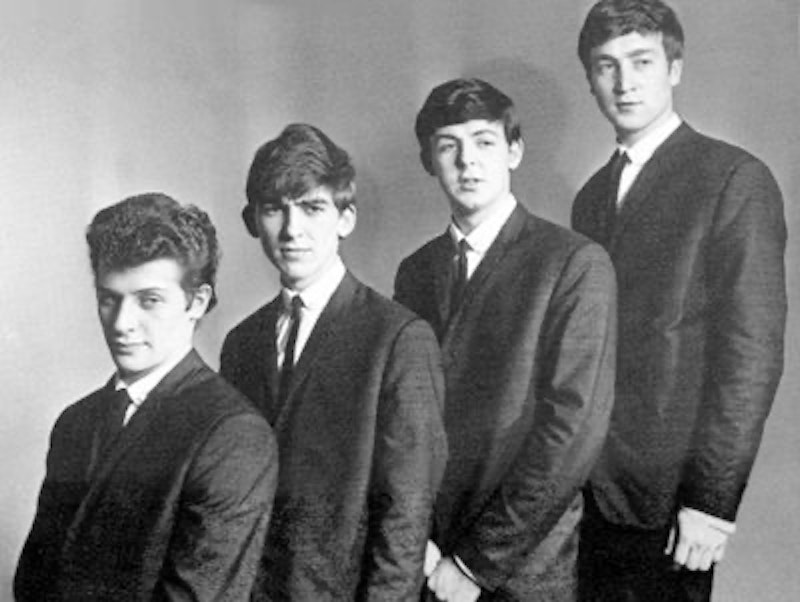 At my tryout Lennon wants me to play “Boney Maroney.” I say no. I guess they think I don’t like the way he asked, and in fact Lennon didn’t ask, not really. He’d drawled the name, and then massaged his forehead. “‘Boney Maroney,’” he said. “Just do ‘Boney Maroney.’” He’s sitting in a folding chair and has one foot up on a nightstand that stands there, abandoned, in a wasteland of cement. Above our heads there’s the Star-Club and a galloping, clopping, crashing sound that I identify as rows of tables being moved, one row then the next, so the floor can be mopped.

“You got the gitt-tar,” Lennon drawls. “The number usually comes along. You got a gitt-tar, it’s difficult not to play ‘Boney Maroney.’ That’s the trick, not to play it.”

The ceiling appears to cough. Something has hit it very hard, as if the waiters wanted to see what two tables and a bar stool could do together.

“Yeah,” I say. “How about… we just get this. I got to be somewhere and I want to see how you guys do as a band. You play, I play, we see how that goes.” I say this in a firm, steady voice, but I’m looking down at my guitar. “Okay?” I tell them. “Because I have to get crosstown pretty soon.” Now I’m looking up. “You got guitars, right?” I say. “I’m kind of curious.”

Lennon looks back at me. The look on his face is that now he has company. He doesn’t welcome me, but he recognizes a fellow presence in the room.

“Bet they’re not as pretty as yours,” Lennon says. He bats his eyes.

“I like the accent,” Paul says, but he’s no longer on my blind side. He’s come mooching into view and he’s winsome again, my old chum at the door. “Mr. Mitchum, you speak with great authority.”

“Jesus,” I say. “You’re staying with that? They just dropped two tables in a row, and you’re doing your thing about Mitchum. Move on.”

Paul laughs. I made him laugh at John.

There’s a metal screech. It’s the door; someone’s pushing it open. “’Ullo,” a voice says. “We’re doing it here then?”

“Not upstairs? I see they got the place upside down.”

“Stains,” Paul says. “Remember? Last night during ‘Besame,’ the sailor that got laid out.”

“Oh, they did him horrible,” says the newcomer. “’Ullo,” he says to me. He’s got a pair of drumsticks in one fist.

“Hey, good to meet you,” I say. None of the boys are big, but he’s the smallest. He’s got liquid brown eyes, and they seem to fight for space with his thatch of brown hair. The three of them have their hair like that.

“I don’t know if they have guitars,” I say, shoulders up, my guitar bobbing. My elbow points sort of in the direction of Paul and John. “I may never find out,” I say. “They’re shy.”

“Come on, lads, get your guitars,” says Ritchie. “Let the chap give it a bash.” He looks around. “Let me see about that table,” he says. Meaning the one John has his foot on.

John gets up. His guitar is behind his chair. Paul has his guitar on a trestle table that stands behind him. Ritchie taps the night table with his drumsticks.

The ceiling screeches. I don’t know what they’re moving up there.

“This’ll do,” Ritchie says. He’s tapping on the tabletop and two of the legs, up and down. This produces a skittering, hustling sound that groups itself into a rhythm, then a beat. He stops. “Yeah,” he says. “That’s all right.”