At the Water's Edge

Notes from a day at the beach. 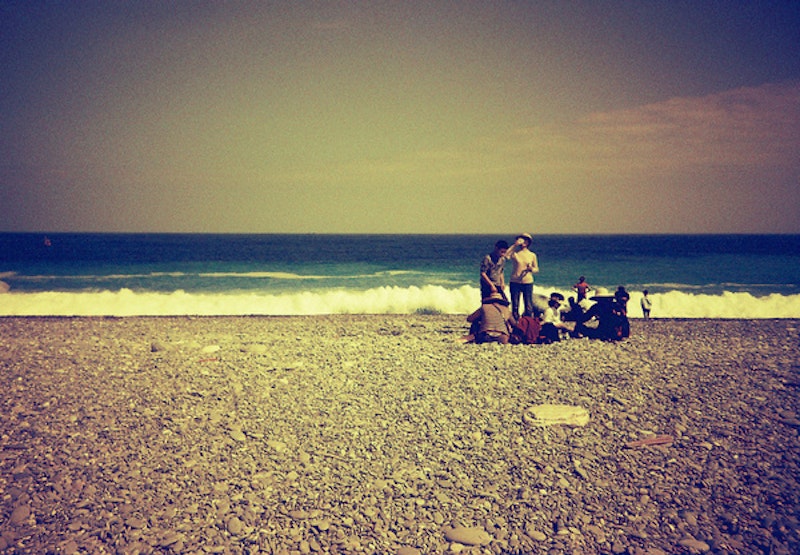 A woman with messy, frizzy hair, in a long, purple floral dress from sometime around 1983 walks onto the beach, holding her shoes in one hand. A man walks beside her, his pants rolled up, his shoes in hand as well. He has a long, scraggly beard, a large, wide-brimmed hat, and a cane. She holds up the bottom of her dress and walks into the water, going only as deep as her ankles. He stands just at the edge, where the water washes over his feet and then away. They stand like that for a few minutes, and then take a few steps onto the dry sand, turning to face their similarly dressed companions. They pose, arms around each other, while one of their companions takes a picture. They smile, acting as if this is the first time they have seen a beach.

A woman in a black swimsuit and shorts arrives, along with her chocolate lab. The dog is on a long leash, which is tied to a heavy, round piece of cement. She drops the cement into the water. It works for the most part, but the dog keeps running full speed down the beach whenever it sees another dog, dragging the weight along. She chases, trying to grab the leash. She tries to keep the dog occupied, focused on chasing a stick and not other dogs. The dog looks happy, wagging its tail, barking at her to throw the stick if she pauses for a moment. They both run in and out of the water multiple times, chasing the stick and each other. When she tries to relax in a chair, the dog gets bored and runs off, forcing her up to chase it again. She doesn't look happy, apologizing to the other dog owners. Despite her smiles at the dog and at other people, she seems lonely.

Whining children are here with two adult women. They call one Mom and one Nana. Nana goes in the water with them, after a long drawn-out production of putting on sunscreen and goggles, of finding water shoes and blowing up rafts. One of the little girls has cried three times in the 15 minutes they've been here. Once because she got sand in her eyes, and once because she couldn't find her shoes. The third time is from unknown provocation. She cries from the water. Her brother and sister are further out, with Nana, the youngest one crying to her mother who is sunning herself on the beach. Mom seems only vaguely interested in the children, more annoyed that her time in the sun is disrupted. When the youngest cries, Mom tells her to swim out to Nana. They don't stay very long, packing up rafts and towels after a short swim and digging in the sand.

There’s a hole in the sand, with two plastic children's shovels left in it. One’s purple and the other’s orange. At the bottom of the hole is a half-crushed beer can. There is no one nearby with either beer or children.

A red gazebo tent is set up, with loud Latin style music playing. There’s a man playing bongos along with the music, under the tent. People watch as they walk by. Some of them stop and dance, some keep walking. There are two women with him, standing silently under the tent, looking disinterested. One of them speaks in Spanish, gesturing with her hands towards the man. The other woman nods, barely looking at her, remaining silent. The man ignores them, and continues playing his bongos.

My friend starts throwing sand onto my foot as I lie on the beach blanket. I look back at her. She’s also lying on her stomach, in her beach chair, at an almost right angle to me, reaching forward with her hands into the sand. Her boyfriend is sitting in his chair, his feet on the cooler that is placed in the angle between my friend and me. He’s sleeping now, having put away his ukulele. My right foot is now completely buried in sand. She can't reach my left foot.