Ben Schott takes on a daunting challenge in Jeeves and the King of Clubs. 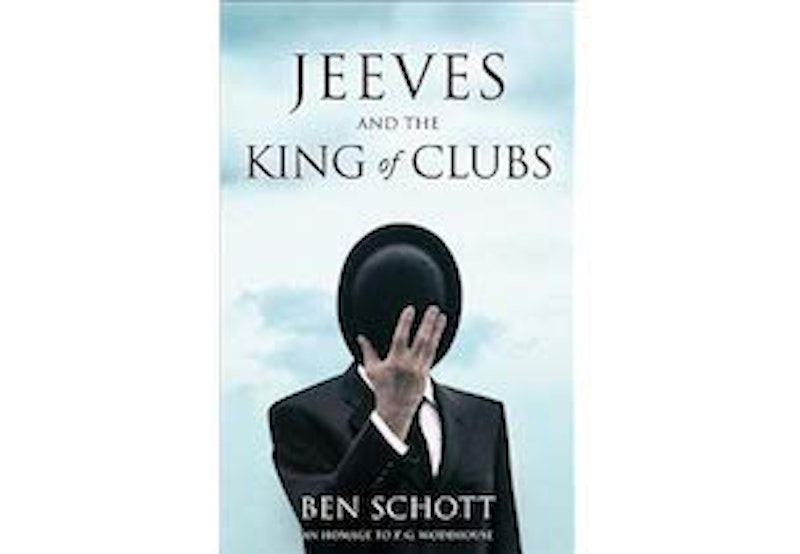 Ben Schott is a brave man. Journalist, travel writer, and compiler of miscellanies and almanacs, his first novel is a pastiche of some of the greatest comic prose in the English language: P. G. Wodehouse’s Jeeves stories. Jeeves and the King of Clubs adds a note of international espionage to the tales, and if the result doesn’t stand up to the Wodehousian canon it’s at least an entertaining bit of apocrypha.

Consider first the task Schott faced: Pelham Grenville Wodehouse wrote novels, stories, and plays that were both intricate and droll. Sentences combined surreal imagery with elaborate yet elegant syntax. Plots were delicate clockwork, unwinding through an escapement of subplots into farcical catastrophes in which a maximum of chaos resolved into harmonious order.

Wodehouse built an interwar world of upper-class twits, gentlemen’s clubs, matrimony-minded near-spinsters, and indomitable aunts. Perhaps his best works were the Jeeves novels, narrated by genial and wealthy but blockheaded and spineless Bertie Wooster, wherein Wooster’s fecklessness and willingness to help friends and family combine to get him into precarious positions—from which he’s extricated by the machinations of his gentleman’s gentleman, the quiet, discreet, industrious, knowledgeable, and thoroughly brilliant Jeeves. These 35 short stories and 11 novels are not just technically superb pieces of writing, and not just gasp-for-breath funny, but cheerful in the cozy way that comes from watching lovable characters have adventures that thoroughly suit their nature.

Schott loves these stories, and sets out to imitate them; there’s no parody here. There are a few jokes where the tone feels a little off, but not many, and a couple of straight-faced knowing anachronisms. There are certainly in-jokes and knowing references to Wodehouse and his writing. But this is on the whole a Jeeves novel aspiring, as much as possible, to be something Wodehouse might have written. It comes surprisingly close.

That has a lot to do with Schott’s style. Bertie Wooster is not bright, but has suffered through a specific kind of educational philosophy. The sentences Wodehouse imagines for Wooster’s recollections of his exploits are therefore rhythmic (conscious on Wodehouse’s part, but not on Bertie’s), filled with half-remembered quotations, and breathe the specific kind of informality that was natural to a brash young person in the 1920s and early-1930s. Woosterian English is a tremendous accomplishment, and a daunting challenge to recreate.

Schott very nearly manages it. He gets the structure of the sentences and paragraphs right, and most of the tone. He’s lacking some of Wodehouse’s absurd imagery. But the pace of the prose is similar, and there’s a respectable amount of absurd comedy in Schott’s writing—just not as much as Wodehouse could summon.

The book has its greatest difficulties is in its plotting. It introduces a range of subplots, as Wodehouse might’ve done, but doesn’t interlace them as dextrously. They feel too separate, and the climax is less finely machined than most of Wodehouse’s endings, which typically unite subplots in unexpected ways to create maximum pandemonium—out of which Jeeves subtly, miraculously, produces order. There’s some of that here, but the sequence of events is too linear, based around a funny but straightforward chase scene.

The book feels unfinished. Plot points are introduced that hint at a bigger story than we get, and the last pages suggest there’s more to come. That wouldn’t be unwelcome, but it does reinforce the sense that we haven’t really seen a true climax; what we have is a piece of a Jeeves epic, not a more-or-less normal-sized novel.

But Schott gets the characters mostly right. Wooster’s a bit sharper than usual, and not quite so lacking in willpower. But the difference is acceptably subtle, and Jeeves feels right. So do many of the supporting characters: loud, warm, obsessive Aunt Dahlia; the high-handed and formidably intellectual Florence Craye; the odious Roderick Spode. Schott adds some new characters who blend in well, notably a friend of Bertie’s with his heart set on Craye and a knack for performance.

What is most interesting and distinctive is the way in which Schott conjures the Wodehousian milieu. After World War Two Wodehouse was well aware he was writing about a vanished world. Schott knows that, too, but approaches it with a different enthusiasm than Wodehouse, more focussed on antiquarian strangeness and examples of the British being British: a club that moves from house to house, the tradition of false books on a library door, the secret ingredient of Lea & Perrins’ Worcestershire sauce (leaving artfully unspecified how the name of the sauce is pronounced). Schott reconstructs Wodehouse’s world with more realism that Wodehouse. Not much more, though there are endnotes and references; not enough to feel unbalanced. This isn’t a different literary world, but a parallel one depicted in slightly different ways.

Still, one might wonder about the wisdom these days of making Roderick Spode, would-be fascist, central to the plot of a light humor book. And I wonder how close to some readers’ bones it cuts to see a nationalist character fulminating ludicrously about the colour of British passports (which, also ludicrously, became a point of debate in the wake of Brexit). But then that’s the testament to Wodehouse’s fictional world: it can survive that sort of glancing acquaintance with reality, even in the hands of another writer. If that writer’s sufficiently skilled.

Which Schott is. He notes in a postscript that “my aim has been to establish base camp in the foothills of [Wodehouse]’s genius, and direct climbers up towards the peak.” That’s a fair ambition, and a clear-eyed assessment of what Jeeves and the King of Clubs can reasonably hope for. It manages the trick, and whets the appetite for a return to Wodehouse’s originals.