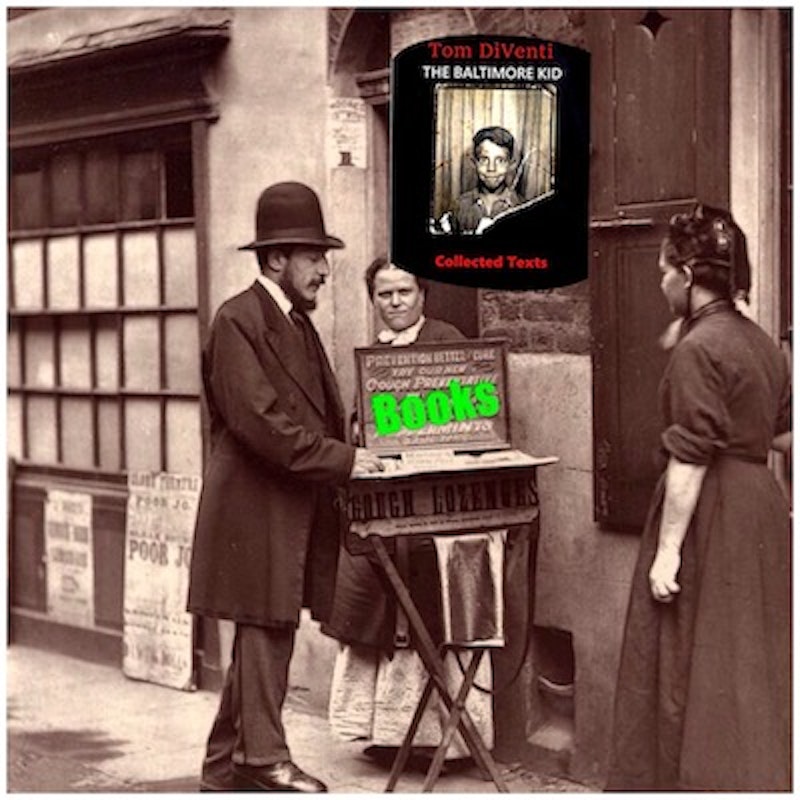 My book, The Baltimore Kid, is out. What is this? A book of collected texts, short stories, essays, blog posts, novellas, rants and ramblings. Available now for consumption by a hungry public starved for literary munchies. Social satire and some reminiscences of the old Baltimore where I was  born and slowly bred for rebellion. The Tinytown of years past.

Book publishing today is consumed by one mega giant online everything store named after a river in the rainforest. They've created a monopoly in books and just about everything else those electronic tentacles can grab. In the 1980s, copy machines made duplicating multiple images and text easy. The digital age was upon us. Caught in the interweb glut of consequential mass media infiltration in the public domain, for social consumer markets made for profit. Absorbed by the cultural monster of the Intel revolution. Leaps and bounds above the brick and mortar, jumping invisible hurdles of e-commerce and www.com. A conspiracy maybe, but definitely free enterprise.

This really has nothing to do with my latest literary endeavor that’s finally ripe for picking. It’s a new beginning that will spawn more books, volumes and the latest editions to prop on the dusty shelf of antiquity. What good are books today? Take into consideration there are too many people who don't read. I know a lot of writers who slave over their work, perfecting some polished tome no one will care to read. Yet we continue to produce more words in more books because that's how it goes. Most folks like to look at the pictures. Reading is too much work. Someone will write a book entirely written in emoji images like hieroglyphs. If they haven’t done so already.

As a poet, writing short stories is a recent endeavor for me, for this weekly column in Splice Today. Splice is published by my longtime friend and editor Russ Smith, former co-owner/editor of Baltimore’s City Paper and later New York Press. He knows firsthand about the demise of printed matter in the news industry. A while back we talked about that and also this very concept which grew over the last few years to became a book, The Baltimore Kid. Volume One. Thirty stories taken from the weekly column. I’m grateful to Russ for allowing me the pleasure and opportunity to have a regular platform. To share my thoughts or merely rant and rave. As a kid, I always envisioned a writer as a tragic lone figure who hid away in a room drinking heavily and chain-smoking. Feverishly writing immortal texts like a drunken monk in a monastery sweating over illuminated manuscripts.

It’s a sweet romantic daydream that evolved into something close to the original vision. It’s a discipline that’s never mastered. Conquering the fear of a blank page. Trying to make sense of the world around you. Emptying your head onto the page. A jumble of ideas arranged and rearranged until they make some cohesive thoughts in a thread of reality. A conveyance of images that tell a story you may understand. To fire at will, rapid shots in a dark mind’s eye. The last one standing tall upon a bright paper field of glory. Take a stab at it and live to write another day. The pen was mightier than the sword. Now the computer is the weapon of choice in the dirty-bomb age. It’s capable of spreading words instantly like no book could. But they can disappear with an accidental delete.

I wonder if books will survive the future? If we can survive our own echo. It can start over, begin anew, record a history born of cave paintings, sign language, and a communion of ideas. Passing along the stories of us. All of us. The whole batch of the good, bad and indifferent. Handed down from future generations past, one long glorious story. Song and dance tales of bittersweet joys and sorrow. Carved in stone and written on the wind. Told and re-told of the way we go. All different, yet exactly the same.