Notes on Spring, and My Newly Thick Russian-Style Beard 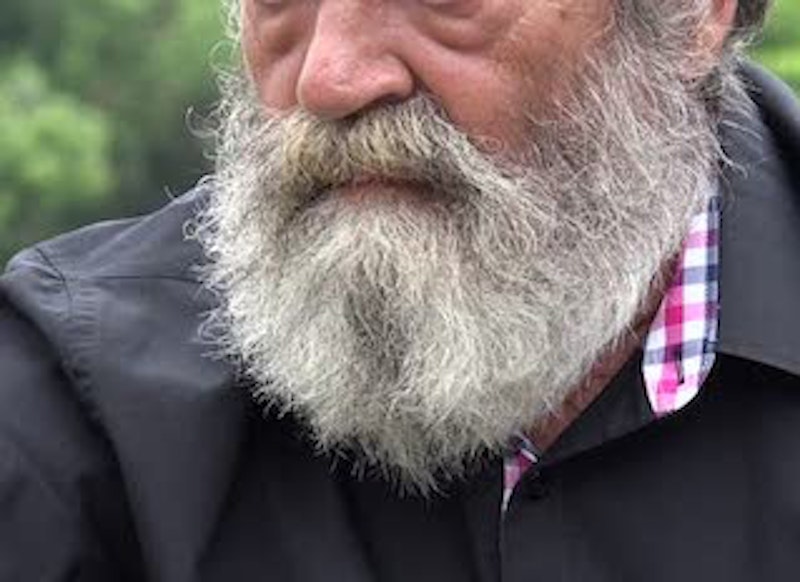 The peas are blooming in the back field at our Indiana homestead. The barley and the faro are taking root in fine fashion in the plots adjoining the raw spot where the new septic tank was recently sunk. I wonder if the sewage leaking into the soil from the tank, for sewage always leaks from even the best and newest tanks, will supercharge the growth of these noble grains, imbuing them with even more than their usual ample share of wholesomeness and nutrition. Grow on, most tender young shoots, and godspeed! In the orchard, meanwhile, the cherry, apple, and plum blossoms have just finished favoring us with their pastel riot.

Elsewhere on our property, the sow Petrushka has littered. She now lies content, giving nipple to lively piglets. What happiness to be a piglet, and to nestle the sow’s swollen gland between one’s lips, and take innocent suck! The feast of the Venerable Arsenius the Great of Scetis, that feast that for me marks the deepening of spring, has come and gone as well. Here at our Benedict Option redoubt, Brother Aiden, Sister Marie, Mother, and I marked this feast with the appropriate ritual genuflecting, caterwauling, and keening before the little “iconostasis” in our common room—a small collection of saintly icons, including that of the Venerable Arsenius himself.

The rhythm of the seasons, humble worship, the bounty of the Lord—these are among the Good Things of our mortal existence, and I give thanks for them. We are especially grateful for them given how the world beyond our blessed property is diseased—the Lord’s blessed order disfigured by sin.

But when is it not?

Yet not all is so bad. It occurs to me that my beard grows the more luxuriously thick as I grow older. This is a welcome benefit of advancing age, one to place in the balance against arthritis, the ballooning of the gland of semen production, the rigors of sciatica.

I’ve aspired to a long, patriarchal beard since I became old enough to shave. For decades I rued the fate that made my facial hair insufficiently thick to support the sort of elaborately swinging, maybe even braided, beard that I desired. My frustration was made all the worse by the fact that I’m hirsute in other areas: the legs, the buttocks, the back, the perineum. Eventually I put this matter into perspective, but it remains the fact that the Lord in His wisdom had seen fit to fashion me into human example of what the economists call “non-optimum distribution of resources.” What I wished to be here, on my face, had ended up there, on (for example) my perineum. And that was that.

There have been worse tragedies, obviously. And yet, a convert like myself to Russian Orthodoxy naturally desires the full beard of his Church’s priests and monks and metropolitans and patriarchs, not to mention of many of its saints, and of certain of the great Tsars who have ruled over Holy Mother Russia. I suppose this is an expression of the zeal of the convert—the phrases “holier than the Pope,” or “better bearded than the metropolitan” come to mind. But then I am a convert, and it stands to reason that I should possess some of the insecurities of the convert.

I wonder what other such insecurities I possess. Is my dabbling in Russian language studies a sign of such an insecurity? My affectation of a walking staff? My increasing attraction to beekeeping, a vocation that for years I’ve left to Brother Aiden here at our Benedict Option homestead?

At any rate, around the time I hit 60 I noticed—in correlation with a rapidly diminished sex drive—a new richness to my beard. Hormonal changes must have had something to do with this. Suddenly I was capable of growing out my beard without mangy patches and the shame that they cause a man. Last August, during the Feast of Blessed Laurence, fool-for-Christ of Kaluga, I realized that my beard was actually long enough to braid, in the manner of the residents of the Tolstoyan Christian communities of the early years of the Russian 20th century. (If not of Tolstoy himself, since as far as I know he didn’t braid his beard.)

I also wonder: was my youthful attraction to growing a long beard what you might call proleptic of my future conversion to the Russian Church? Was it a sign itself of my eventual fitness as a convert?

O Lord, Who hath mastered the past, the present, and the future though we know it not

O Master Who lovest mankind, with the pure light of Thy divine knowledge

Who causeth the sun to rise and the moon to wane

Unto Thee and Thy words we ascribe glory