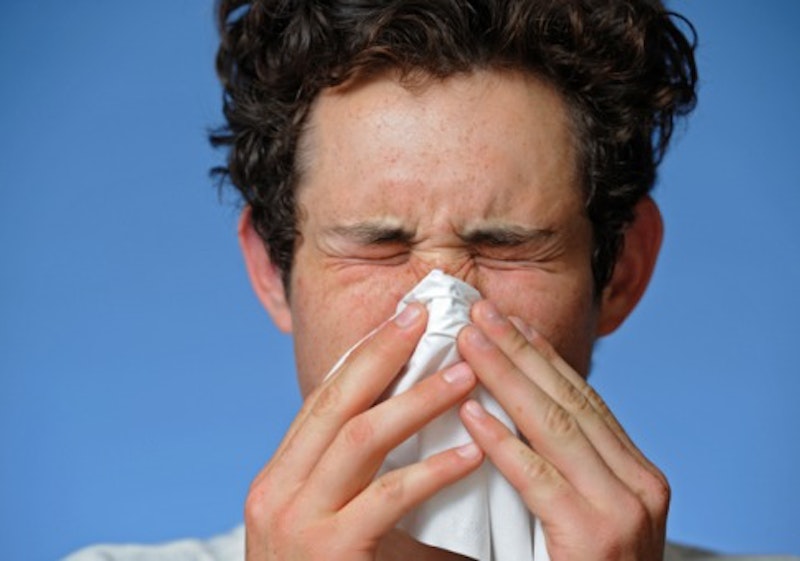 Although I haven’t had a major illness so far in my life, I have constant minor ones. A chronic condition leaves me prone to sinus infections, and to sinus inflammations that might as well be infections. The physical symptoms are subtle. The practical effect is simply to shift my basic category of being, my ontology: from healthy, I become sick.

During these bouts of minor illness, it’s rare that I get even a small fever—I’m more likely to have my temperature drop a little—though I do sometimes break out in a sweat. I don’t normally get a runny nose or other sign of congestion. Mostly, the physical symptoms don’t go far beyond dizziness and exhaustion. No pain; that’s not the problem. It’s just that the disease affects my ability to think. It’s not dramatic, not usually, and not entirely predictable. But I’m left in a subtly yet significantly altered state; not hallucinating or raving, merely suffering from a terrible lack of focus.

Past and future seem to recede. There’s only a present moment, and I don’t know what to do with it. Concentration’s impossible. It’s difficult to even read, which is something I find easier to do than watching film or TV—rather than have to work out what it is I’m seeing, and how the moving image before me relates to the previous shot, it’s normally much simpler and intuitive to watch words fit into clauses, clauses into sentences, sentences into paragraphs. But not when I’m sick. When I’m sick it’s too hard to chase a point through the curves of logic and diction.

It’s impossible to write. When you form a sentence, you have to do several things; present an idea, to start with, but also connect to the previous idea, and set up the next idea. It has to have a place within the overall paragraph, and the paragraph within the overall essay or chapter. The tone of the sentence has to be right; how it reads, short or long, complex or terse, neutral or charged. You have to manipulate your syntax and word choice to specify not only what you want to say, but also how it is to be said, since the how helps define what it is that’s being said. If you’re writing fiction, you have to look at what you’re writing in the context of character and theme; if non-fiction, you have to make sure your facts are right, and make sure the overall progress of the piece (narrative or essay) is being served by the things you’re saying in the given sentence. It sounds difficult, written out like that, but normally it’s an almost instinctive process. That changes when I’m sick. Then it all falls apart. I put down words, delete them, think, grow dizzy and sweat. And I realize: damn, I’m sick again.

It’s depressing. I’ve read symptom lists for clinical depression that seem similar to what I feel when I’m sick. Things that ought to be easy become hard; I feel drained of all energy. I don’t suffer from the major signs of depression, but it is hard not to feel gloom when I can’t do something I ought to be able to do easily. What I recognize most in those symptom lists is the absence of happiness. The lack of focus isn’t just creative or intellectual, but emotional and spiritual. More broadly, there’s a lack of an experience of resonance. If I listen to a song, for example, I don’t feel the enjoyment I ought to. I’m not moved, or able to feel what I ought to feel. If I eat a favorite food, I’m aware that it tastes good; but in some way it’s not vivid. I’m too drained to process it properly.

It’s as though remembrance is impaired without memory actually being lost: meaning is scattered. Familiar objects, things that matter to me, don’t call up the associations they ought to. I don’t look at the spine of a book and remember drowning in words. I don’t look a window of my parents’ home and feel anything about the street I used to play in as a child. Smell becomes not so much muted as less present; smell may be a direct link to memory, but it works backward, too, so that when you’re not quite able to feel those flashes of totalizing reminiscence you don’t notice the smells that ought to call them forth.

I can’t help but think this ties into my inability to generate text when I’m sick. The lack of resonance extends to words. The lack of an ability to ascribe meaning or emotional content to things means a lack of ability to write. I don’t have the reflex awareness of the way one word ought to link to another, the way a word links to a thought or to the thing it describes. How can you put words in order when that basic sense of their meaning becomes attenuated, becomes diffused, becomes suppressed by a minor and low-key but unavoidable sickness?

(None of this means that I’m incoherent when I’m sick. Not for the most part. Sometimes I’m distant or inattentive. People who know me better, I think, notice it more. But the basic chore of coming up with my own dialogue isn’t really in question. Only the precision of the words, perhaps.)

Obviously, I’m frustrated when I’m sick, because I can’t write. I want to do something; something important to me, something I love doing. And I can’t. It’s oddly symbolic that, when I’m at my worst, lying in bed exhausted, I very often feel a desire to get up and go somewhere, to walk, to proceed from one place to another place. I’m driven, but not in the right direction; unable to reach the proper end, the drive’s diverted into another channel.

Because these symptoms are so unlike typical physical signs of disease, for a long time I didn’t realize how sick I was, or how often. It took an infection traveling to my ear, causing sharp and undeniable pain, to begin a long process by which I came to know, if only partially, what was happening in those strange small tubes curving through my skull. By which I came to understand how closely linked the physical and the mental really are. The problem, of course, is that this awareness doesn’t actually stop me from getting sick. Sometimes I’m affected for weeks or even months. Medication last year helped for a while. But the condition’s seasonal, and I had a frustrating winter I’m still getting over.

Frustrating: that’s the key word. That’s what minor sickness is. Not crippling, not tragic. Just frustrating. There’s only one thing that even partially makes up for it. And that is the fact each bout of my illness has an ending. I can’t think about the future when I’m sick; but the future comes. However slowly, the sickness ebbs. Smells return. The awareness of memory in sense perception revives. I begin to feel surges of energy. Happiness, a kind of deep contentment, an awareness of where I am and where I’m going. Like headphones that have slipped half-out of the music player, leaving tinny and echoing sound, slammed back all the way in: the world’s rich and detailed again, and all the resonances are in the right place.

Earlier today I could feel it. I sat out on my back porch, and smelled the oak leaves opening, the lilacs in bloom. I could hear power tools, somewhere else in the neighborhood, and at the sound I remembered, half-consciously, an indistinct time in my youth, my father and uncle at my family’s cottage working on some project (a dock? a back porch?). I could recall being young, but I was most present there on the porch, then at that moment. I could feel the season, could feel the place, had a sense of the absoluteness of place: peeling paint on the floorboards of the porch, the thin black metal bars of the curving stairs, the redness of brick to my left hand. It was a feeling of health, an awareness of space and of the linkage of thing to thing; an awareness or intuition of relations between things that can’t be properly explained, and which therefore must be explained, and so becomes, being beyond language, the creative key for new ways of using words.

These things I was aware of. And I was aware also of the grayness of the sky, the thick and low clouds, the seasonal changes that cast into doubt how long I would be able to hold that awareness before, again, that ever-so-gentle minor illness would return.