Construction is never easy, nor is knowing who to look up to. 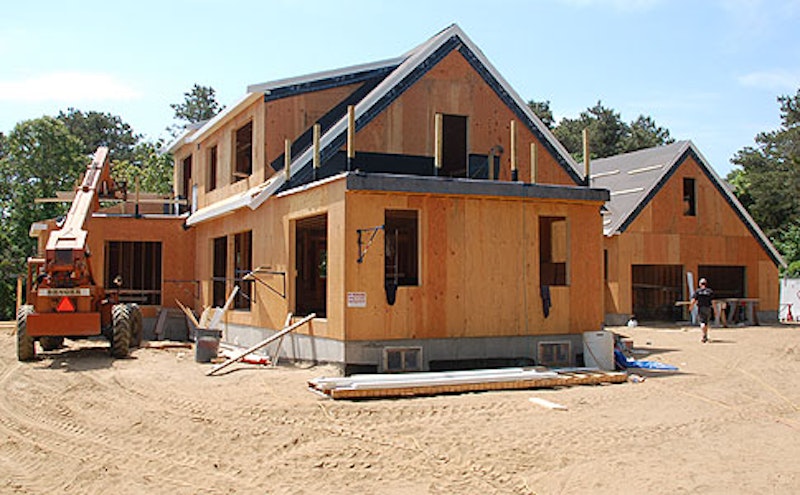 Each summer, when I was between 14 and 19, I worked for my uncle  as a carpenter, who built high-end custom homes all over Cape Cod. Every morning I would drag my ass out of bed before the sun rose and drive across the Sagamore Bridge to the site in Osterville or Sandwich or Brewster. I learned early on to drink black coffee and to leave the insulated world of book learning back at my desk at school. It didn’t take me long to quit peering into the back of his cubevan for sneak peeks at the dozens of Playboy calendars that wallpapered the areas not retrofitted with handmade shelves and cubbies for saws and drills and levels. I loved the smell of the sawdust on the old, green carpenter’s apron that he gave me after I graduated from schlepping plywood and palates of concrete into hanging siding and laying deck. I convinced myself that I was a better man for knowing the difference between pressure-treated white pine and cedar. My uncle, in a custom polo shirt and khaki shorts, would take time to instruct me once or twice but after that would need to focus on finish work or building stairs, and I spent most of my time working alone.

My uncle worked with a partner and had spent his entire career building custom homes and filling the winters with remodels. He even built the house I grew up in, which was how he inevitably met my aunt and became a part of our family. He and his partner did fine work and built their fair share of multi-million dollar summer homes for Wall Street guys and corporate executives. I found their skill and attention to detail remarkable. They worked in concert, rarely talking. The number of days they worked side-by-side made communicating a waste of time.

My job evolved from the menial tasks of sweeping up kitchens during a cabinet install and digging footings for a deck into framing walls for rooms with two-by-fours and a nail gun and cutting baseboard with an angled chop saw, back-cutting it by sticking my pencil underneath the board before I made the cut in order to cheat the angle, which would allow the baseboard to hold tight in the corners of the room.  I enjoyed seeing and touching my work, but paid for it. I made hardly any money, probably topping out around seven or eight bucks an hour my last summer there, and the margin for layman’s error evaporated. I worked hard and did my best to get better. I remember breaking countless stainless steel nails in a huge deck I had to lay out, because they would bend in the Ipe, an exotic and ridiculously expensive Brazilian hardwood that was deep and rich in reds and browns. I would rush, over-hit the nail, and dent the wood with my hammer, “pecker marks” as he would call them. Sometimes I’d try to spit on the wood in the hope it would swell and the dent would disappear. He caught me a couple times and reminded me to use my hammer instead of my dick.

I grew to hate the job, but my uncle was a hero. He could swear better than anyone I knew and he was strong and brave when he would walk out over a roof frame and nail the truss without looking down or flinching. He had had sex with women, many women, and it did not take long for me to forget that he was married to my aunt during his self-flattering anecdotes. He worked harder than anyone I had ever met, and you could see it in the houses he built and the money he made and the women he had. The mistakes I made cost him money, and giving me a job was a family favor.

The shine began to fade. The stories took on a quality that I lapped up as a youngster but came to question in my last summer. The tales of steroid-charged libidos and cocaine binges disgusted me, and I couldn’t help but think that his son was my godson. He’d joke about having sex with my aunt, and her relationship to my own mother left me with only a nauseous chuckle. I began envy my friends who worked at summer camps and at golf courses. My parents reminded me that I was learning valuable skills. Staying with it cemented those skills and made me tough, and I’d have to spend my mornings listening to the war stories of my fallen idol while we sipped coffee together and my evenings hearing the play-by-play of his eroding marriage during family dinner.

I took other jobs while in college, the resume-boosting sort, and recall the fraudulence I had felt mailing in my college essay championing the work ethic and grit I learned humping wheelbarrow after wheelbarrow during my summers off, which would have invaluably set me apart from my pampered classmates. He and I joked around, about me not being cut out for carpentry, but he would always end by letting me know I could work for him anytime. I’d gloat to him about my on-campus debauchery over a game of pool and a beer, hoping that he would look back with an impressed smile or a nod. But then he would caution me to not settle for the first girl or the second or the third, continuing to sullenly lament his own loss of freedom.

My aunt did not divorce him until after I had graduated from college, following my own experiments in self-reliance and believing in the dangers of emotional attachment. His influence had settled in like a blood clot. My reverence for hard work callously ignored the benefits that luck bestowed upon me, and I developed a transparent resentment toward those who were given more than me, which I justified with the few thousand hours I spent pretending to be a carpenter. And now with occupation exchanged for teaching and writing I wonder: is someone always listening?  In the years that have followed the summers I spent next to my uncle, it is apparent to me that the person you come to idolize, even for a short time, will go on to influence you somehow in your dealings with your work, or in your diligence, or with sex, or family. I only now realize that they shouldn’t.