With Goliath, cartoonist Tim Gault shows us the lighter side of the worlds most famous Philistine. 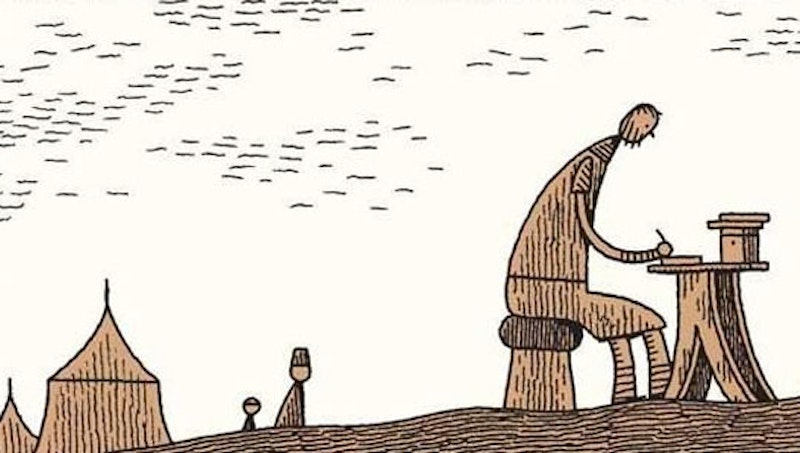 Sure, he slaughtered that beer hall full of drunken humans but have some understanding, Gardner seemed to be saying. There was a history there, with interlopers treading on Grendel's home turf. Things escalated quickly, as Ron Burgundy would rationalize it. Men treated Grendel like an enemy and practically drove him to dispatch them en masse.

The pro-monster approach was surprising in 1971 when Gardner sprang that one on us, but we're used to it now. Ogres, like onions, have layers. The beast merely pines for his beauty. That monster in the closet just needs a hug. In fact, he's probably terrified of your toddler. As with mythical monsters, so with Biblical ones. Jezebel was really a pioneering feminist, according to one recent, awful biography. We've even had many modern “gospels” from Judas's point of view. But Goliath? How could anyone conceive of a sympathetic portrait of that particular big dumb Philistine?

I hadn't thought it possible, but Guardian cartoonist Tom Gauld pulls it off. More impressively, he does so while affirming everything the Bible says about the giant. His short graphic novel Goliath is boxed front and back by words that evoke the text of scripture. The story begins, “Now the Philistines gathered their armies on a mountain and the armies of Israel stood on a mountain on the other side: and there was a valley between them.”

The first several pages are silent as the night. The full moon illuminates an army camp spread out up the uneven terrain of a mountain. While others sleep, one solitary lanky figure is bent over a table, scratching out something on a tablet. He stretches and reaches for a mug. It is empty, so he hikes down the mountain and wades into a stream that runs through the valley to fill it. He pulls an object out of the water and considers it in the moonlight.

Someone breaks the spell by calling his name: “Goliath.” A short, bearded soldier with helmet and spear asks Goliath what he's doing there and scolds him. He ought to “be careful” with the enemy so close and all. The soldier notices the object in Goliath's hand and asks what it is. “Just a pebble,” says Goliath of the egg-sized stone. “D'you want it?” “Why would I want it?” asks the soldier. Having no good answer, Goliath eventually plops the stone back in the stream and hikes back up the mountain.

This is the back story of the great giant's defeat and the rout of the Philistine forces. Gauld spins a very black comedy that reminded me of Dilbert and Kafka. His Goliath is a dutiful member of the Philistine forces who just isn't much of a soldier. “I'm the fifth-worst swordsman in my platoon,” Goliath insists, when presented with the proposal that he taunt all the Israelites. “I do paperwork! I'm a very good administrator.” The Philistine general ignores his concerns. “The point,” he informs the giant, is that “You look like a champion.” If Goliath will only play the part, “There won't be any actual fighting,” because “this is a battle of minds.”