Have a holly jolly and all that rot. 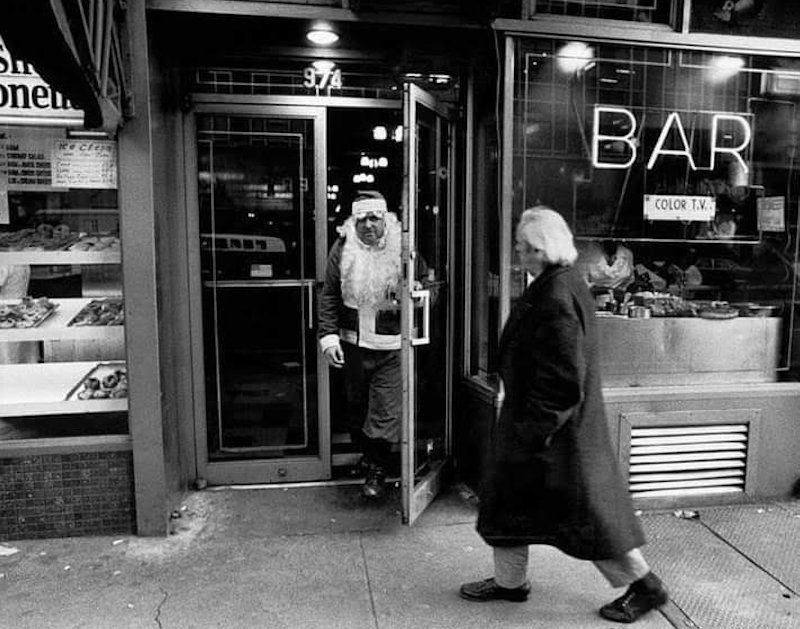 Here we go. One more year gone. It's the most wonderful time of the year. Merry Christmas, and don't forget to have a Happy New Year. Have a holly jolly and all that rot, and at the very least, we'd like to forget all the other stuff, maudlin Muzak that re-emerges everywhere at year's end. Those poorly-costumed Santas ringing that bell begging for the Salvation Army. Geesh. I'm not feeling it this year. Like all is right with the world for a minute. The anticipation of good times and good will toward all, peace, love, good tidings to you, the entire ball of wadded up wrapping paper and ribbons waiting for the recycle bin. And I won't even touch on messing with the baby Jesus.

My oldest friend Michael Gentile and I still share a running joke before the holidays. I'll say, "Almost Christmas, Mike," and he always replies in kind, "Almost Christmas, Tom." Or vice versa. Many decades of holiday cheers we've spent together or apart. It became a traditional greeting for us. I can't hang with Mike much nowadays like we used to do, but we keep in touch, and inevitably, the mock sentimental greetings are still going strong.

I have fond memories of past holidays. As a kid, I could stare forever at the blinking lights and glittering silver tinsel strands hanging on the pine tree, waiting for Santa to arrive. We did the milk and cookies routine. But that delusion didn't last. Watching snow fall outside through the frosty windows at night in the air surrounding the golden glow of old-fashioned green-poled streetlights along the avenue. The aromas of mom baking cookies filled the house, Dad's homemade egg nog laced with cinnamon, nutmeg, and a lot of booze. I laughed, tipsy while singing silly songs with Aunt Helen and all the times waiting for my father's return home from long sea voyages in the Merchant Marines. I always looked forward to visiting relatives for big family seasonal feasts and the wild parties clustered around New Year's Eve. But they're all gone now. My parents and relatives slowly disappeared, the parties too, all dwindling to a precious few.

This year I'm not in very high spirits. However, it’ll be nice to see some of my wife's family over the holidays. They've adopted me into their circle. It makes me feel welcomed in a surrogate family. That’s only if everyone tests negative for the plague. If not for my wife's loving care and constant reminders of gratitude, I’d surely go off the deep end quick. I'll talk with my sister in California on the phone at some point soon. I haven't spoken to my brother in a long time. He disowned me after my mother died, saying he didn’t care about me anymore. He could wash his hands, no longer keeping up the charade.

That's how it goes. At first, it bothered me, but now I couldn’t care less. I've also written off a lot of people. Those fair-weather types who drain your energy, darken your angst-ridden soul with terrible intentions. They're not happy until you're not happy. Brotherhood and fellowship be damned. I don't have time for piddly assholes who think you owe them some loyalty and respect when they show none.

I can be the grumpy grinch. But let's go for the gusto if we're going to wallow in the pigsty of cancel culture. Cancel Christmas, New Year’s celebrations, and the Super Bowl too. Cancel every useless holiday except Halloween. The only one that's around every day. No reason to give hope a chance. No more refunds on faith. Pray for anything, wish for stuff, beg forgiveness. See if it materializes. Apologize for shortcomings, transgressions against nature. The cancellation department is open for business. Post your grievances. I hope I'm done with putting on airs, wearing a good face, keeping up appearances, making the best of shitty situations.

Life is tough enough just getting by with semi-good looks, some barbed wit, and a bit of luck. I have to question if Jimmy Stewart's character, George Baily, would still wish not to be born were he alive in these times, would he still think it's a wonderful life?  And the mean one, Mr. Grinch who stole Christmas, would he still melt his icy cold heart if the townsfolk of Whoville didn't care he stole it? Could there be a Miracle on 34th St. if Santa Claus got drunk, contracted Covid, and infected all the little children?