I Become What I Detest

“Dog for President” in early-1980s Baltimore. 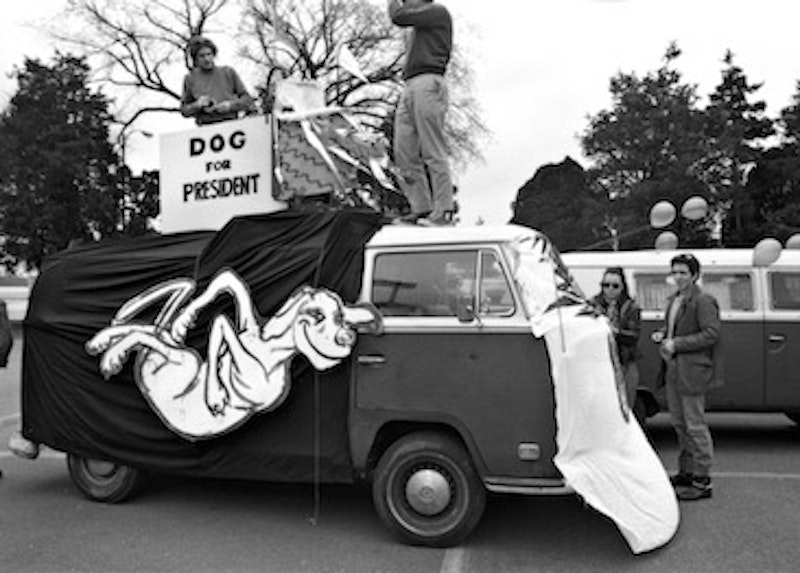 Bigger, faster, stronger, longer, harder, it sounds like a classic case of penis envy. Or the leader of the free world. Maybe the Commander-in-Chief is smarter than us too. It's been noted he has a very big brain. He’s richer, happier, sexier and told he looks like Elvis Presley. Every photo-op I see of Trump seated looks like he’s perched on his golden throne toilet trying to pinch one off. All of this boasting fragments a serial liar that’s really something more than whatever the fractured reality seems to be.

As a former big cheese president Bush was recently laid to rest, all maudlin tributes and glowing eulogies praising this war criminal are gobbledygook. He and his henchmen plunged the country into wars still being fought and financed right now with no end in sight. A touching photo of the faithful service dog Sully lying on the floor by his coffin was the feeble play at sympathy. A network television tribute, "Love Letter to Gampy" from his granddaughter Jenna Hager Bush was the cherry on top of a golden dog turd. Thank the devil it's finally over.

The vintage dog food commercial jingle bangs in my head. "My dog’s better than your dog," because that dog eats Ken-L Ration. Sure, but it's only a dog. They’ve been known to eat shit too but it doesn’t make them better. It could be a pedigree thoroughbred or a mangy mutt but still just a dog. Be the best dog you can be.

FLOTUS Melania's "Be Best" campaign is about as effective as a dog food commercial. Like comparing a timepiece that retails for 30 grand or a 30-buck Timex. Which one is best? Your guess is as good as mine. The "be best" slogan makes a better film-flam. Time is time and the time is now.

She can have a red Russian Christmas; Elvis can have a blue druggy one. The Grinch can be green with dollar envy. Bing Crosby wallowing in a classic white one. Which one is better? They all suck. For better or worse, hacking all my best to my betters. The authors of all our pain. The facts in my fiction add up to a staggering amount of nothing. In an ill-fitting skin twisted by being the best at being. God plus nothing equals us. I guess everybody is the best at something.

Fake, faux, phony, overpriced stuff we believe we want and need. Slap a price sticker on that black market baby and watch them get taken for a ride. Offer deep discounts on happiness and witness the carnage as frantic fools push and shove to grab that plastic pile of desire. A punch, a slap then a drop kick to the groin for a 60" HD LED TV with surround sound and free buttered popcorn. Never give a sucker an even break.

I try to be kind and humble, but my feeble attempts to embrace some civility get in the way of my scornful disdain. I hate being a hater. Loathing my contempt of the contemptuous. It only takes one to breed many loveless. A vortex of hate spinning like a tornado around a sad sorry place. I reject these loutish clowns and yet in doing so become driven to my own clownish behavior. I say things they might say. I become what I detest.

Privileges of poison pens and bloody swords. Becoming too stubborn to share love. So jaded to feel feelings. Call it compassion. Some call it self-interest. Into the darkest fears we tread into a heaping pile of our own making. Please don't judge me, I'm only human, like you a mere trace of my former self. A Kumbaya moment.

I want to say something good and think good thoughts. Like everyone, I want to be better at love, acceptance, and recognition. I deserve as much respect as any for accomplishing so much for zilch. Trying absolutely everything humanly possible to solicit feelings of mutual admiration. Being better can backfire. Feeling better than others in a vain attempt for universal love and flattery. Showboating your way to ridicule. Becoming what was despised. Painted into corners of regret in a room without walls. If you hate therefore you're hated.

The photo above, capturing "Dog for President" was taken in Baltimore during the early-1980s. It was part of a parade down 33rd St. celebrating the underground art scene. I sat atop the van waving to the unsuspecting crowd. I had a dog sitting at my side. No one really knew if it was me or the dog running for president. It was the beginning of the Reagan years. George H. W. Bush was Reagan's Vice President. It was the start of an explosive diarrhea landslide into the septic tank that’s precisely where we are today with Trump. It was my only foray in politics. I was the "Dog" running for president. I don't believe my dog is better than yours. Sometimes it’s better that way.