Through the history of Bensonhurst via bike route. 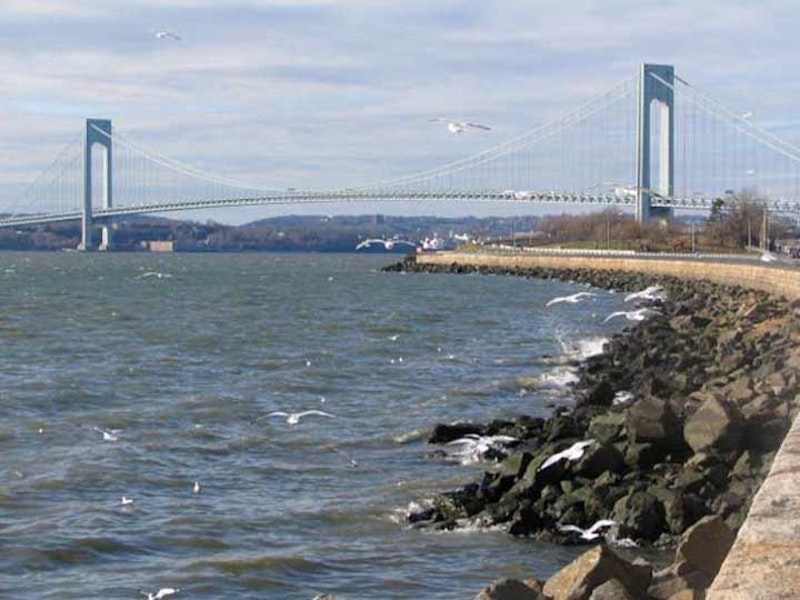 I lived in Bay Ridge between 1957 and 1993 (aside from Dyker Heights in 1990-1991) but the adjacent region to the east, Bensonhurst, the vast area between 14th Ave., 65th St. and the Belt Parkway and Bay Parkway and Stillwell Ave., was largely unplumbed territory. I had no antipathy for Bensonhurst, but in the bike rides of my youth, coming out of Bay Ridge, Bensonhurst was always a neighborhood I passed through on the way to Brooklyn and Queens’ southern reaches: on the way out I was eager to get where I was going, and on the way back I was tired and in a hurry to get home. I decided to march down its main artery, 18th Ave.

The 18th Ave. story begins, or, more officially, ends (the house numbers are highest at the southwest end) at Gravesend Bay, where I snagged this postcard-worthy shot. We’re along the bike and pedestrian path that was fortuitously built during construction of the Belt Parkway in 1939-40 and ahead of us is the Verrazano-Narrows Bridge, which I like to say was built in my back yard.

That bridge looms large over many southwestern Brooklyn streets but nowhere better than here, at the westbound Shore Parkway, the Belt Parkway service road. I once looked at an apartment years ago on 95th St. near 4th Ave. that had a view of the bridge out the living room window. I was ready to sign when the landlord got cold feet. That happens when you’re single and 30. As it was, the apartment I had then, on 73rd St,, had a long-distance view, but only in winter when the leaves were down. 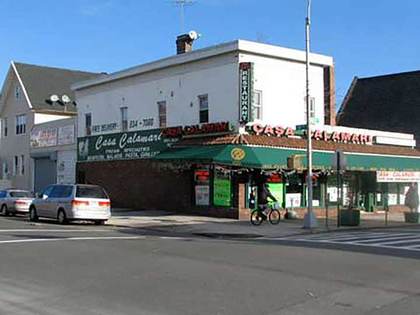 The old Casa Calamari was at 18th and Bath Aves., the “House of Squid.” I enjoy seafood but have never been tempted to eat squid or octopus; it just looks unappetizing swimming around, with the arms and suckers and all. The Casa does boast Brooklyn’s “finest wood burning brick oven pizza” though.

Bath Beach and Bath Ave. were named for the British spa town on the Avon, famous in high-school British lit classes for the concupiscent, frequently-married heroine featured in Chaucer’s 14th-century Canterbury Tales. This was a recreational area in Brooklyn too, as villas and yacht clubs clustered near the shore. It’s not a beach these days, but there’s a small sandy area along Gravesend Bay near the W. 8th St. entrance on the Belt Parkway. Bath Beach also had an amusement park (Ulmer Park, closed 1899, remembered today only by the bus depot at 25th and Harway Aves). The Depression ended Bath Beach’s days as a seaside resort area and soon, multi-unit housing appeared on its streets, further encouraged by the construction of the Belt Parkway through the neighborhood in 1939-1940. Till they hit it big in showbiz, the Three Stooges (two of them, anyway, Moe and Curly) were carpenters in Bath Beach. 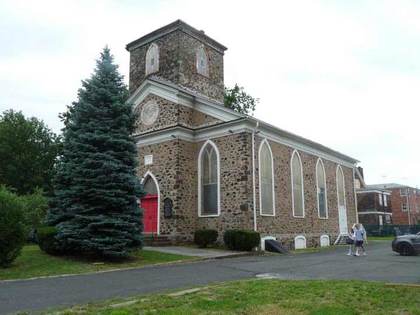 Kings County, from the colonial era to the late-1800s was made up of six separate towns: Brooklyn, Bushwick, Flatlands, Flatbush, New Utrecht, and Gravesend. Over a couple of centuries, the City of Brooklyn gradually absorbed the other towns (after part of Flatlands became New Lots). By 1896, Kings County and the City of Brooklyn were finally coterminous, but then, Brooklyn voted to consolidate with New York City, by a very thin margin, in 1898.

The town of New Utrecht was named for Utrecht, Netherlands, the fourth largest city in that country. In Dutch, “Utrecht” is derived from two words that mean “old fort,” so that “New Utrecht” means “New Old Fort.” It’s remembered in Brooklyn by New Utrecht Ave., the much shorter Old New Utrecht Rd. and by New Utrecht High School, which was shown in the opening credits for the 1970s Welcome Back Kotter TV show and where your webmaster took his math SATs.

The heart of New Utrecht has always been the two sites of the New Utrecht Reformed Church. The first church in New Utrecht was formed in 1677 and its first church building was first built about 1699-1700, standing at what would become 16th Ave. at about 85th St.. This original church was razed long ago, but its ancient churchyard is still there.

A “newer” church was built in 1828 at what would become 18th Ave. and 84th St. and contains some stones from its predecessor, along with Tiffany-style stained glass. The bell of the two New Utrecht Reformed Churches has tolled to mark the death of every U.S. President, beginning with George Washington in 1799, and in the 1990s rung to mark the deaths of Joe DiMaggio and Frank Sinatra. 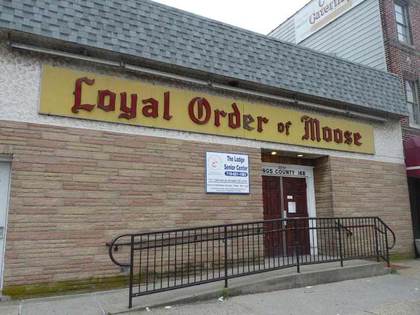 Loyal Order of Moose, 18th Ave. between 77th and 78th Sts. I never attempted to join a fraternity in school. The idea of organizations with secret handshakes, and fezzes was too conformist for me. I recognize that these clubs provide needed services in their neighborhoods around the country. 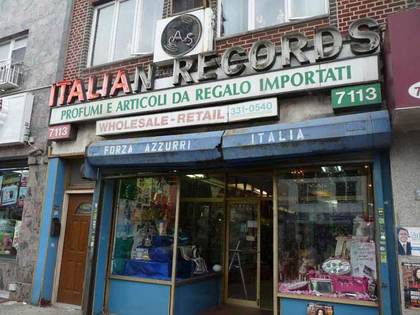 Though Bensonhurst through much of the 20th century was traditionally Italian, it’s been increasingly occupied by immigrants from Russia and South Asia. However, many longstanding businesses retain their Italian heritage. S.A.S Italian Records, #7713, was founded in 1967 by Italian immigrants Ciro and Rita Conte. The store sells recordings from the old country but also CDs by Italian-American artists such as Sinatra, Dean Martin, Al Martino, Connie Francis, Louis Prima and also imports such as music, movies, beauty and bath products, soccer novelties, housewares and playing cards. 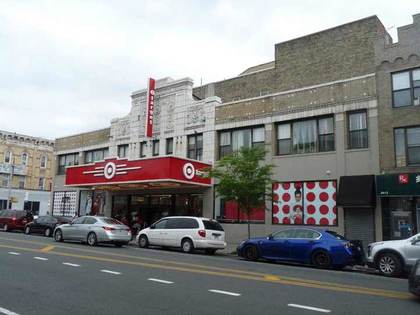 One of the rare NYC theaters named for a mayor (the only one perhaps), the Walker, at #6401, for Mayor Jimmy Walker, opening in 1927 with Walker appearing on opening night. The theater seated over 2200. It lasted surprisingly long as a performance venue: by 1980 it was still hosting acts like Helen Reddy, Kay “Rock & Roll Waltz” Starr and Rosemary Clooney, who as a 1970s kid I knew only from her Coronet paper towel commercials. (“Extra value is what you get when you buy Coronet!”). Before the cable TV era, top prizefights like the 1975 Ali-Frazier Thrilla In Manila were beamed on closed-circuit feed here. It closed for good as a movie venue in 1988. A Target store currently occupies the site.

A close look at the exterior reveals a trio of William Shakespeares. To me, they look like they could be caricatures of “Gentleman Jimmy.” 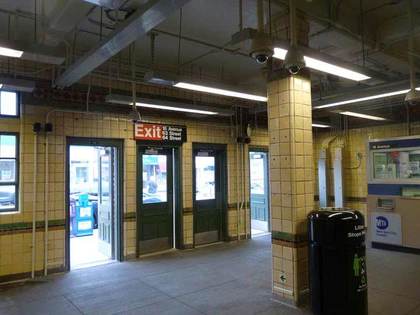 Time to make a move for home, at a classic BMT 1915-vintage station. The Sea Beach Line (now the N train) stations were renovated recently but thankfully, most of their original esthetics were preserved.