A childhood prank nearly turns into manslaughter and blackmail. 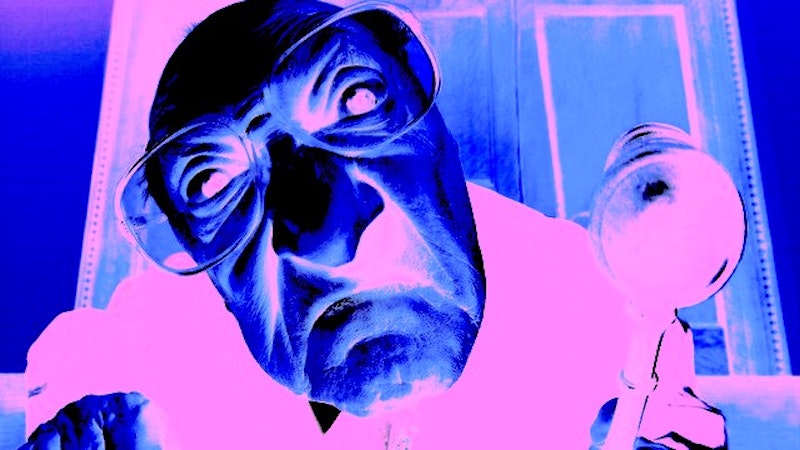 Jimmy Saget was a tough kid, an older boy who broke into cars and smoked hand-rolled cigarettes. Rumor was he caught a rattlesnake with his bare hands and kissed it on the back of the head. No one witnessed the event but it took on legendary status in our neighborhood. In the summer of 1973 when I was 10, Jimmy said he’d repeat the feat for $20 a person. Word spread as if Evel Knievel were coming to town.

Several friends and I gathered our allowances and met Jimmy on the dirt fire road beneath Mulholland Drive. He arrived on a motorized scooter his parents gave him for his bar mitzvah. He wore a blue bandana, black Chuck Taylors, dirty jeans and a t-shirt.

“Listen up, punks,” he said. “Before we go anywhere, I need to see your money.” We pulled out our crumpled bills and gave them to Jimmy. Todd Shapiro handed over a bunch of quarters. “No coins, creep. Only cold hard cash.” Shapiro would miss the show.

“Whatever happens,” Jimmy said, “I don’t want word getting out to parents, teachers or cops. If you say anything, I’ll kick your ass. Understand?”

We followed Jimmy up a thin trail that quickly ascended. The path was filled with weeds and thistles with sharp thorns. We entered a thick forest of oak and pine trees, and crossed a wet and stinky stream fed by a sewer pipe. We rounded a corner and came upon the rusted remains of several old cars. The vehicles were covered with leaves, branches and foliage and were in varying states of decay.

I’d heard about the place but this was my first time seeing it in person. The Auto Graveyard was a ravine a few hundred feet below Dead Man’s Curve on Mulholland. It was famous as the spot where Jan from the band Jan & Dean nearly died when his vehicle plummeted off the cliff. Over the years, drivers intentionally dumped cars for insurance purposes or to get rid of crime evidence. Jimmy bragged that this was where he stowed his cash after late night burglaries. He showed us thickets where the coyotes slept, pointed out paw prints from mountain lions and told us how he’d once killed a rabbit with a BB gun.

“Where are the snakes,” Josh Rosen asked.

“You ever been bit,” Danny Marx asked.

“Once on my hand. I had to cut myself with a knife and suck out the poison.”

“What did it feel like,” Michael Moskowitz wanted to know.

“When the fangs go in your skin, it hurts like hell. After a minute, you lose feeling in your arms and legs. Another minute and your heart beats like crazy. You start sweating and after 10 minutes you’re foaming at the mouth. You have 20 minutes to get to a hospital for anti-venom. If not, your veins explode and you bleed from your mouth, nose and asshole.”

The thought of blood coming out of Jimmy’s butt filled me with terror, but I still wanted to see him battle a snake. Jimmy peeled off his shirt. There were brown scars across his back. He moved toward the burned-out hulk of an old Chevy and explained that snakes hid beneath cars to escape the heat. He grabbed a long stick, knelt down and lunged at the unseen space beneath the car. The atmosphere grew tense. I wanted him to emerge like Tarzan with a massive boa constrictor around his neck. He remained belly to ground for 10 minutes. When he finally arose, his face and chest were covered with dirt.

He shook the twigs from his hair and put his shirt back on. We watched as he ate a Snickers bar and tossed the wrapper onto the ground. Josh voiced the question on all our minds. “When do we get our money back?” Jimmy shrugged. “It’s not my fault the snakes aren’t here.”

“It’s not our fault either,” Josh shot back.

He hawked a loogie toward the Chevy and walked away. We watched as he disappeared around a bend of trees. It wasn’t the first time I’d been hustled by an older kid. I gave Mark Wachs $10 so he wouldn’t beat me up. I paid Billy Levin $15 for a set of 1972 Dodger baseball cards. The set was missing Steve Garvey, my favorite player. Billy said Garvey wasn’t on the team until 1973, a blatant lie. There was nothing I could do since he was bigger and stronger than me.

After Jimmy left, we consoled each other for being ripped off. In truth, I didn’t mind. We’d had an adventure and I appreciated seeing how tough kids like Jimmy functioned in the world. Josh, on the other hand, was pissed. He was the smallest of us but the bravest. His dad was a local disc jockey with a popular radio show called “Stand up to the Man.”

“We need to get our money back,” Josh said.

“Jimmy said if we tell anyone he’ll kick our ass.”

“You see those scars on Jimmy’s back,” Josh said. “Those are belt scars. That means his dad probably whips him. And that means Jimmy’s scared of his dad.”

Jimmy’s father was a well-known criminal court judge. He’d made the papers after overseeing the case of a man who raped and killed a teenager. When the man threatened Judge Saget in court, the judge pulled a gun and said, “Come after me and I’ll shoot you like a dog.” He was suspended for several weeks but the incident made him a local hero.

“I’ll talk to him,” Josh said. “He’s a judge. He understands right and wrong. When he hears what his son did, we’ll get our money back.”

We played baseball in the street for the rest of the day. Around five, Jimmy’s father drove past in his black Mercedes. We waved. He ignored us. Josh kicked into gear. We followed Josh up the street to the cul-de-sac where the Sagets lived. I hated confrontation but knew if I stayed behind I’d be viewed as a coward. Jimmy’s dad was checking the mailbox when we arrived. He was a strange-looking man with hair like Larry from The Three Stooges and a Groucho Marx mustache. Josh stepped forward.

“Judge Saget,” Josh said with bravado. “We need to talk to you.”

“About what,” the judge said. His dark sunglasses and deep voice were intimidating.

“State your complaint,” the judge said.

“We gave Jimmy money to find us a rattlesnake. He led us into the hills but there was no snake. We want our money back.”

Jimmy stood in the open doorway of the house. He glared at us, furious.

Jimmy obeyed. He kept his eyes glued to the ground. I felt a sense of hope as if the wheels of justice were turning.

“These boys have accused you of breach of contract. Did you take their money?”

“What did you promise in return?”

“I said I’d take them to the hills where the snakes live.”

“Quiet,” Judge Saget shot back. “James, face your accusers and relate the exact terms of your oral contract.”

“I told them that for $20 each, I’d show them where I’d seen rattlesnakes in the past.”

“I said if I saw a rattlesnake I’d try to catch it. I didn’t see a snake.”

“Did you see any snakes?”

“No. Because he didn’t find them like he promised.”

“But he attempted to find them, correct?”

“He led us on a wild goose chase.”

“I have what I need for my ruling. Boys, there’s a principle in contract law called Caveat Emptor. It means it’s the responsibility of the buyer to discover contractual defects from the seller. James has no control whether a snake will appear in the wild in the same way he can’t control if the sun rises in the morning. He brought you to a location where he’d seen snakes in the past. This fulfilled his contractual responsibility. To expect anything else is unreasonable.”

“So you’re letting him off,” Josh asked.

“The burden of proof is on the accuser and you haven’t met that burden. I find James not guilty.”

Two days later, Josh told me his plans. We left early in the morning and walked down Laurel Canyon to Studio City. After a quick breakfast of beef jerky and Coke at Thrifty’s, we went to the Pet Store on Ventura Place. The aging proprietor greeted us.

“What kind of snake?”

“All snakes bite if threatened.”

“We want something guaranteed to bite.”

“Why,” the proprietor asked. He was suspicious. Josh went into lying mode. He was the best liar I ever met.

“My dad gave me a film camera for my birthday. I want to make a movie where a snake attacks my G.I. Joe.”

The old man smiled and led us to the snake aquariums in back. He showed us garter snakes, boas and a king snake. He reached into a large tank and pulled out a medium-size red snake.

“This is a black-banded milk snake. It’s non-venomous but aggressive. It bites like the dickens.”

The proprietor put the snake in a plastic container with air holes and placed this in a larger box. We walked back home and devised our plan. Around three o’clock, we scouted Jimmy’s house and saw the driveway was empty. I pressed the doorbell and hid in the bushes. No one answered. Josh took the snake from the container and stashed it in the mailbox. We hurried back to Josh’s house.

That night, I ate dinner at Josh’s house. We had burgers and fries while his father perused the racing forms. The doorbell rang and Josh’s dad got up to answer it. A moment later he called for us. We walked to the door and saw Judge Saget, his face red with rage.

“You little bastards. You’re going to pay for this.”

“You know what your punk son did? He hid a poisonous snake in my mail box. It almost bit me. That’s attempted murder.”

“That’s quite an accusation, judge. Where would my son get a poisonous snake?”

“Son, did you put a snake in the judge’s mail box?”

“There you have it. My son isn’t involved.”

“He’s a fucking liar. I deal with punks like him every day.”

Judge Saget looked down at Josh with fury. “I’m going to make it my mission to send you to juvenile hall. You know what happens to kids like you in juvie.”

“Judge, I know you’re up for re-election next year,” Josh’s father said. “We were big advocates for you on our radio show last time. I hate to think we’d have to shift support to your opponent.”

“Are you blackmailing me?”

“He’s a delinquent,” the judge said.

“You have to discipline them young.”

“I think it’s time for you to leave.”

Josh’s father closed the door in the judge’s face. We heard the judge’s muffled voice yell out, “You haven’t heard the last of me.”

For the next few weeks, I worried about the judge’s plans for revenge. Nothing happened. Jimmy left us alone as well. There was a red snake sighting in Mrs. Froelich’s garden. We also heard about a boy getting bit by a rattler on the fire road. The following year, Judge Saget was re-elected for a third term.