The town was his milieu and creative muse. 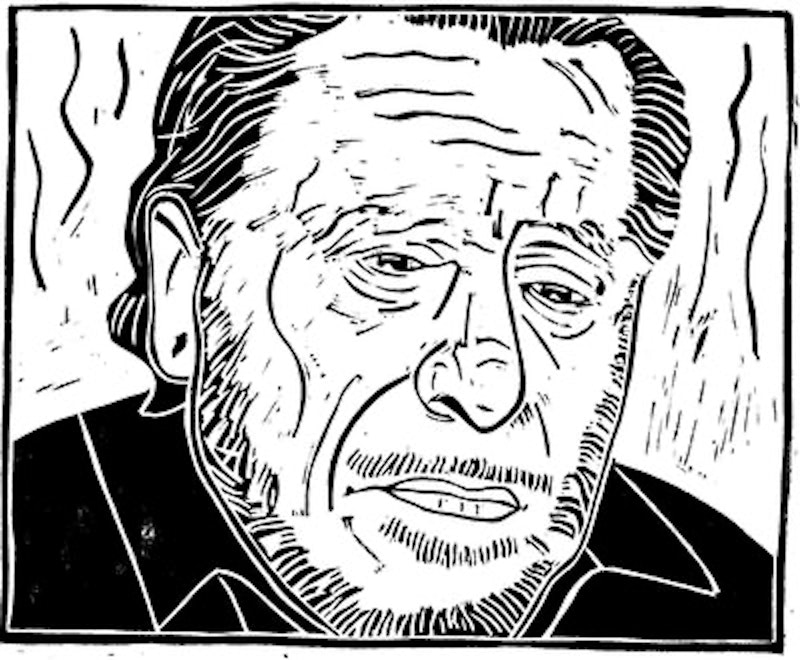 Charles Bukowski was a poet of the profane, or, as Time called him, “laureate of the lowlife.” A student of the gritty streets, he wrote about the shadow side of America. Prostitutes, dingy bars, human cruelty, and lonely trysts. He was a brutal drunk, a misogynist, a self-admitted louse. But he was also a prolific writer and at times a sensitive poet with a twisted sense of humor.

Born in Germany in 1920, Bukowski grew up in Los Angeles, the son to an abusive, alcoholic father. He began writing (and drinking) in his teens. He struggled for decades, toiling as an on-again/off-again postal worker until 1969. He was a private person who loved cats and valued his solitude. "I don't hate people,” he wrote. “I just feel better when they're not around."

Los Angeles was Bukowski’s milieu and creative muse. Many of his fabled haunts have long since been torn down but some locations remain intact and provide a unique view into the life of LA’s literary son.

Post Office Terminal Annex, Downtown LA: Bukowski worked as a letter-filing clerk for 14 years. During this period he penned a column called Notes of a Dirty Old Man for The LA Free Press. He felt the post office was killing him slowly and poisoning his desire to write. Black Sparrow Press Publisher John Martin offered Bukowski $100 a month for life if he would quit his job and dedicate himself to writing. Bukowski finally quit in 1969. He documented his experiences in his first novel, Post Office, written at age 49.

Pink Elephant Liquor Store, East Hollywood: Located at Western & Franklin, the Pink Elephant was where Bukowski picked up booze and bidis (Indian cigarettes). His beverages of choice included Cutty Sark (for boilermakers), Riesling white wine, Vodka & 7 and Miller Beer. He despised Coors, calling it the worst beer in America. After Bukowski tallied a number of DUIs, the Pink Elephant delivered liquor to his home.

5124 De Longpre Avenue, Hollywood: This is the bungalow Bukowski rented from 1963-1972. It was here he formally became a writer and where he fathered his only child. Bukowski wrote the novels Post Office and Factotum at De Longpre and the location was the setting for his novel Women.

In 2007, developers attempted to demolish the site and build condominiums. Preservationists and celebrities like Johnny Depp intervened and the location became a historical landmark. Bukowski probably wouldn’t have cared. After all, he said of his own writing, “When I die they can take my work and wipe a cat’s ass with it. It will be of no earthly use to me.”

LA Central Library, Downtown LA: As a young man, Bukowski spent many days in the Philosophy Room reassured by the thousands of books around him. It was here he discovered his literary idol John Fante (Ask the Dust). “It was like finding gold in the city dump.” Other literary influences included Celine, Sartre, Hemingway and Knut Hamsun. Bukowski read every book he could get his hands on and the library was where he developed an ambition to become an author.

Hollywood Park Racetrack, Inglewood: After he quit his post office job, Bukowski spent his days playing the horses to make ends meet. He viewed this as “just another job” and developed a betting system in which he rarely lost and often ended up with a tidy profit. The track also provided a venue for him to observe humanity and meet shady personalities whom he often wrote about in his Free Press column.

King Eddy Saloon, Downtown LA: Unlike Cheers, when you walked through the doors of the King Eddy Saloon, “nobody gives a shit about your name.” Located on the edge of Skid Row, the King Eddy was a bar of choice for both Bukowski and John Fante (in different decades). Bukowski resided at a corner table where he composed poems and served as a makeshift philosopher/psychologist for the patrons. The bar was renovated in 2013, which undoubtedly would have upset Bukowski who once wrote, “When you clean up a city you kill it.”

Other LA Bukowski haunts include Phillipe’s Restaurant, where he ate French Dip sandwiches; Olympic Auditorium, where he took in boxing matches; and Musso and Frank Grill, where he schmoozed with studio executives and celebrities in his later years.

Bukowski published more than 60 books. Hollywood has made multiple movies about him (Barfly, Factotum, Tales of Ordinary Madness) and his writing remains as popular as ever. He died of leukemia in 1994, his funeral was conducted by Buddhist monks. His headstone features a graphic of a boxer and the Zen-inspired epitaph "Don't try."