No, It's Not Weltschmerz

But it's something that hits floppy-haired guys at cafes. 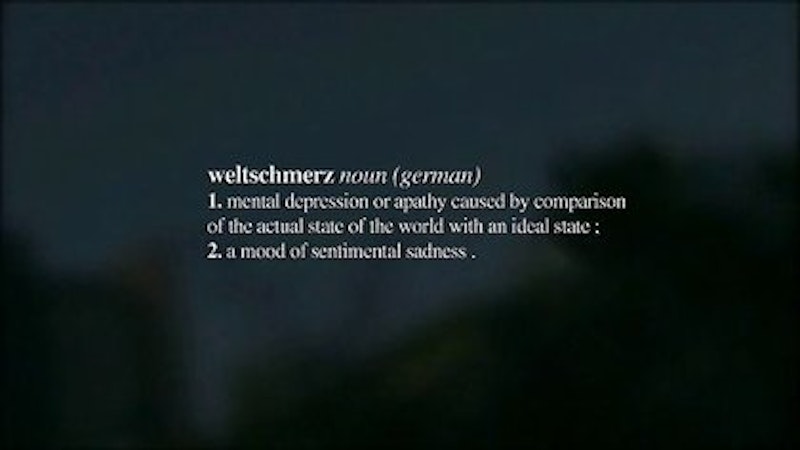 A guy I know gets snotty if I misuse an intellectual phrase. So before writing weltschmerz I looked it up and discovered that I didn't know what it meant. It’s not a cover-all term for any malaise afflicting a floppy-haired intellectual type. It means the terrible state a person can fall into upon comparing physical reality with the perfection afforded by ideas. I have never fallen into that state.

At age 12 I was unduly impressed by the look of Ursula Andress' stomach on the box for a jigsaw puzzle. I bought into that particular mythology right away: tawny forms, shadowed hollows, rippling muscles, arched cheekbones. The one benefit of being so trivial is that physical reality seems just fine so long as the right goods are before you. When I see a pretty girl, I feel like physical reality is doing all right. When I don't see a pretty girl, I can wait until I do.

I have felt many sorts of melancholy, many of them caused by the absence of rippling forms in my private life. But the gap between physical and ideal has never bothered me. I think that's a dividing line between intellectuals and ordinary types. George Eliot, Karl Marx and Leo Tolstoy all fussed over the difference between idea and the clodhopping world. I'm a clodhopper, and I feel like a well-toned leg solves a problem about existence. No ideas have to come in at all. I'll take a look at her calf and decide things are okay.

Prose poem. I am. So the kettledrum commences. The staccato rattle of the self pushes forward. The world assembles itself; there at its center are you and your march forward. Is this for the best? Nobody will ask. The ticket has been bought, the parade moves forward, and after a few decades it will be done for and your past disassembled as you rest in the ground.

When I was 14 my life was streaked with melancholy, the way it happens with many adolescents. Now my life is the reverse. Melancholy is the basic material, and in the melancholy can be found streaks of vulgarity and agitation and merriment. These are the highly pronounced, self-contained moments that take me away from my ongoing reality, that of a middle-aged man who feels low.

Watching The Daily Show, for example. I don't do that for fun, I do it for equilibrium. Someplace there's somebody with concerns pretty much like mine and he's got an audience. We review the day's news together. I watch the fart jokes and so on, the on-air correspondents making noise, Jon Stewart's own horrendous mugging. Together they constitute something like a social environment for me. A lot of this environment doesn't get my interest, but what else is new—it was like that back when I worked at an office. I still need to have my social surroundings, and now they come out of an Internet channel. I watch episodes and feel surrounded, which is irritating but good. The noise makes me feel better, and I think about the girl I saw at the cafe this afternoon, or about her legs.