Either your house is haunted or you’re nuts. 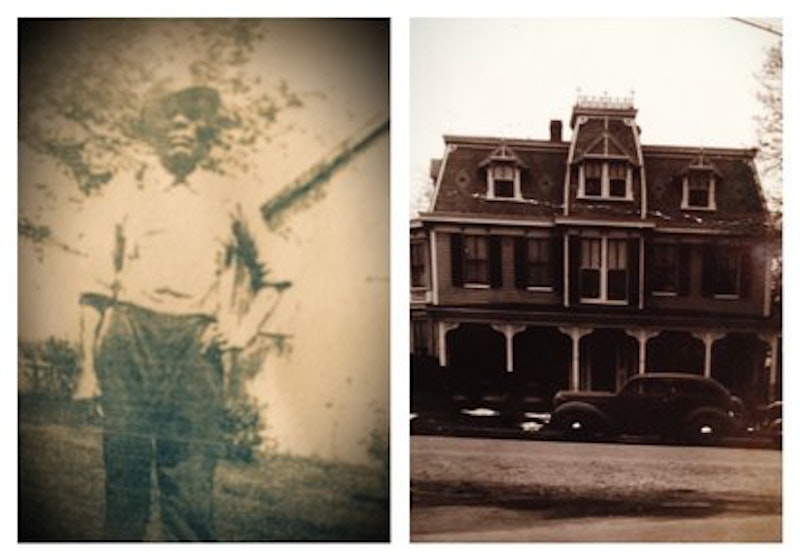 When we bought this 1881 Second Empire Victorian house in 2001, no one told us it was haunted. It’s not exactly something they put on the realty sign. Later I asked one of the kids who was raised here, and he said they always knew it was haunted but they weren’t allowed to talk about it because they were Mormons. It looks haunted: it’s got the whole Addams Family thing going on with the mansard roof; it’s sort of the quintessential “haunted house” place you’d see depicted in any book or movie.

After a few weeks of living in the house, I had a strange occurrence. Lying in bed, I heard a party going on downstairs in the front parlor. Not a teenagers-sneaking-a-party party, a live musicians and dancing and dresses to the floor kind of party. Of course I assumed the TV must have been left on and I was hearing a scene from Gone With the Wind, or something. I walked to the top of the stairs, and then it was silent all at once. Weird. Didn’t think much of it, went back to sleep. A bunch of times I heard footsteps going up and down to the third floor, ran out to see if it was a kid, until I didn’t anymore because it wasn’t.

Then there was the night I met the ghost.

I was doing laundry. It was around 11 p.m., my husband was out of town and the kids were asleep. As I reached to take out a piece of clothing from the dryer, I felt someone walk into the room, like you do when your spouse or kid walks in—you just know they’re there. I slowly turned, about to see what my daughter was doing out of bed this late, and as I turned I saw him—just for a second, in my peripheral vision, and he was gone as quickly as he came. It was an older black man, and I felt like he was telling me I shouldn’t be in there. The laundry room is located on the second floor of the house, above the kitchen, at the top of a small back winding staircase (known in old houses as “servant’s stairs”). The laundry room is the former servants’ quarters.

No problem, ghost man, I agree I don’t need to be in here. I ran to my bedroom and hid under the covers like a child. From under there, I called my husband, got no answer, called my dad, who made a joke about the old TV show Benson. And then I was awake for the rest of the night listening to the creaks and groans that probably happen every night while I’m asleep in the century-plus old house. I didn’t tell many people about it, because there are two kinds of people in the world: those who believe in ghosts, and those who just don’t. Telling a ghost story is not a good way to find out which kind people are. You can be a non-believer all you want, right up until the day you see one, then you have a choice: you can believe in ghosts, or you can believe you’re crazy.

About a month later, a woman who was born in my bedroom in 1917 stopped by. She lived a street over and I’d invited her to tea when I moved in. Dolly regaled me with great old stories of the house and a copy of the memoir she wrote about living here. (When my third daughter was born, she brought me the infant gown her mother had made for her in 1917; I framed it and it hangs in the parlor.) She also had a small pile of pictures: very early sepia photos of the house and family. She riffled through them, telling stories, and then she flipped up a photo of a black man and I gasped. “I’ve seen him!” I said. I looked at her, worried she was the kind that didn’t believe. “I mean, I think he’s still here.” She smiled at me. “Well, that would make sense,” she said, “That’s Wright Dobson. He was a great protector of me and my three siblings and I can see how he’d still be a protector here.”

I told her the laundry room story. She said with the unapologetic vocabulary of someone whose family employed servants, “The colored servant would never have wanted the white woman of the house in his quarter; she didn’t belong there.” His daughter, Helen, she told me, used to run up and down to the third floor all the time when Dolly had scarlet fever and a white sheet hung on the house. I told her I’ve heard Helen, and a few of my children have seen her.

The ghost hunters have been at my house with all their equipment. The power gets sucked immediately from all the electronic devices, typical of a haunted house- apparently ghosts are energy junkies. One of them was pushed by the ghost and they had to do a “cleansing” ceremony in my dining room that was scarier to me than the ghost. Later, a psychic came, all Poltergeist-style and did a sage cleansing to rid the house of the numerous spirits (not all friendly) that we’ve experienced over the years. But the friendly servants Wright and Helen are still here, which I don’t mind. It’s their house, too.