RQ awakens from a nap more confused than ever. 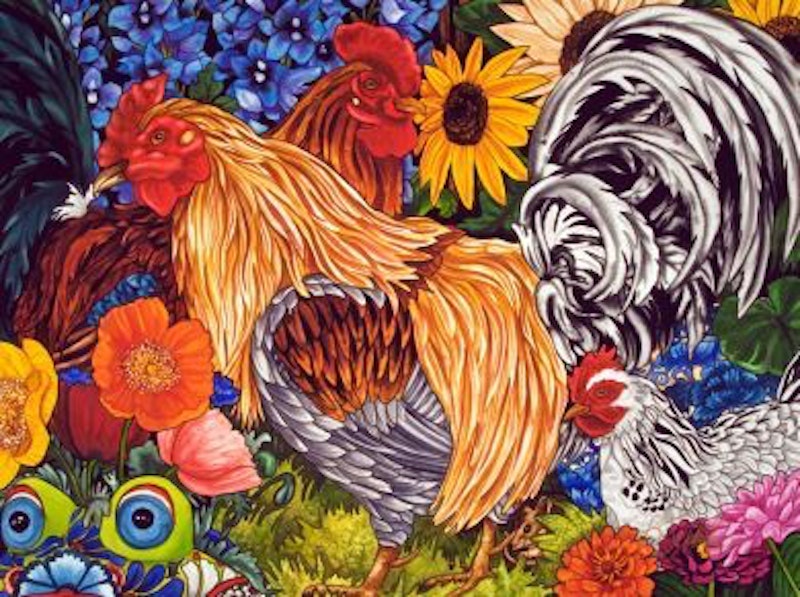 —Roo, are you scratching again?

—AAGH! Oh my god, what is it? Earthquake? Terrorist attack? Aliens?

—Relax, you were just taking a nap.

—I thought I was in Paris.

—You were just dreaming.

—It was a nightmare… endless hallways, corridors… creatures accosting me… I couldn’t shake the feeling that I was lost… I was in a building that started to collapse… then I was at the Crow… I saw everyone… all of our friends… everyone but you… I was panicked and looking for you all night. No one knew where you were… it was horrible…

—…How long were you asleep?

—You couldn’t find me?

—Nowhere! I was so confused. It was awful. Just awful…

—BOOM! You just won the Internet. Bacon. What’s for dinner?

—I’m going out with Beverly and Susan. I’ll be back around three a.m. You’ll have to fend for yourself.

—Ah! Perhaps I will work on my memwahrrrss…

—You have to stop pronouncing it that way. People kept looking at you in the bookstore the other day.

—Ugh! I hate being recognized in public.

Monica grabbed her bag and left the barn, leaving Rooster to his own devices. Contrary to what some have said and what’s been reported in most major newspapers, Rooster was not an invalid, insane, or addicted to any hard drugs. It was all media propaganda and innuendo and false accusations trying to smear Rooster by an organization so vast and disperse it was impossible to battle. There was no way out but in, and for the last year, Rooster had spent his time at home, preferring to read and write rather than go out and explore the world as he had for millennia before. Life wasn’t the same—his body was finally (somehow?) giving out, slowly but surely. He knew he was pecking on borrowed time, but he figured if he could survive solitary in Guantanamo Bay as an innocent bird, he could get through whatever life had to offer him next.

There was no more content to consume via iPad—he was caught up on all of his podcasts, and to save money since their escape, the Quibbitses had cancelled their cable subscription, much to the chagrin of Seamus the Black Bear, a very friendly fellow, a good neighbor, but man, he took his job way too personally. “You’re firing me? Just like that?” Rooster and Monica had to have a sit-down with him in their kitchen, inviting him in and all that when they saw he was about to have a nervous breakdown in their foyer. He cried for at least four hours, and hard—he was a cable technician who took pride in and really loved his work, for some reason. Rooster had been thinking about Seamus a lot lately, and how they were more similar than not. Rooster loved writing and traveling and influencing history; Seamus loved installing cable TV. It’s a shame Seamus never married or even dated—they always wondered why he cared about cable so much. Seamus had a lot of left over love.

—I’m going up to the attic. I’m narrating my thoughts and actions for the people listening in on me, with your microphones and your invisible bugs. Just you and me tonight. Let’s get to know each other.

Rooster climbed the uneven stairs up to their attic and brushed away the cobwebs hanging limp over the hinges. These spiders had been dead for years, and he couldn’t remember the last time he’d been up there. Certainly before the kidnapping, probably years ago… and yet it looked exactly the same, as spare and dusty as they left it whenever they left it. This was the only part of the barn that they hadn’t unpacked since moving—the attic was empty save for 10 big boxes just under the eaves by the cross-shaped window. The sun was blessing Rooster as he climbed that final step, the dramatic light of the magic hour hitting his chest, and then his eyes, and he saw in that ray all the dust and dead matter hanging in the air, going into his lungs, coming out… somehow, somewhere. Rooster moved toward the boxes slowly, as if in amber, because for once he felt alive in the moment, and he knew enough to recognize and savor that when it came in life. He was so used to looking at the world from a distant window, the aperture of his eyes always too narrow for others to understand what he was saying. He could only find comfort in the past, in what had already happened in his and other peoples’ lives. Wellsprings and bottomless pits. He’d had enough for a lifetime.

He started mindlessly digging through a box of his grandfather’s memory box, a footlocker full of documents, pictures, books, tchotchkes, and letters. Old newspapers, correspondence—“J.J. ASTOR LOST ON TITANIC, 1,500 TO 1,800 DEAD.” The Carpathia couldn’t fit enough of them in, someone wrote… Rooster kept digging… Henrietta is gone, she perished in that dark, frozen ocean… I curse the company that put that offense to God out to sea… and I will hunt them down, til the last feather on my body is picked clean and blasted into dust… I will not give up on you—

The paper was torn, but Rooster could see the signature at the top: “R.L.M.N.O.Q. Quibbits.” He plunged himself into the memory box looking for more of his ancestors, to get closer to the source. At the bottom of the box was an envelope unopened. He snatched it up and jumped out of that musty old box, and the thing slammed shut right after him. Nothing was left in the cross window, no melancholy light of late afternoon. Rooster crouched by the window and read by waning light a letter that his great grandfather never sent:

I couldn’t take it anymore. None of this is your fault. I left you with everything. Please do not come looking for me. I haven’t the courage to face you as a spirit, my soul clinging to yours in want for all of eternity. I will wander far away from here and die alone. It is for the best. Under the moon, the sun, and the stars, my love for you will expand and implode all around. I will not give up on you. But I must go. Please understand.

It was written in freak scrawl and almost illegible, but Rooster still felt like he needed a shower after reading an unused suicide note. He put the dirty thing back where it came, enveloped and all, and buried it in the bottom of the box where he found it. He scampered out of the attic a little jittery, nervous even, perhaps in need of a tranquilizer tea? No, no—not yet. Later. No use in indulging.

Except Monica was gone, and he wasn’t sure when she’d be back. He climbed back down the attic stairs and threw them up, locked the hatch, and promised to himself that he’d take another decade before going up there again. There was no point in examining the vicissitudes of the dead when there were hardly enough hours in the day to get your own life done. To look around and see. The craftsman, humbled by the past, hobbled over to his writing desk to start something new, something fresh. It wouldn’t be the last.