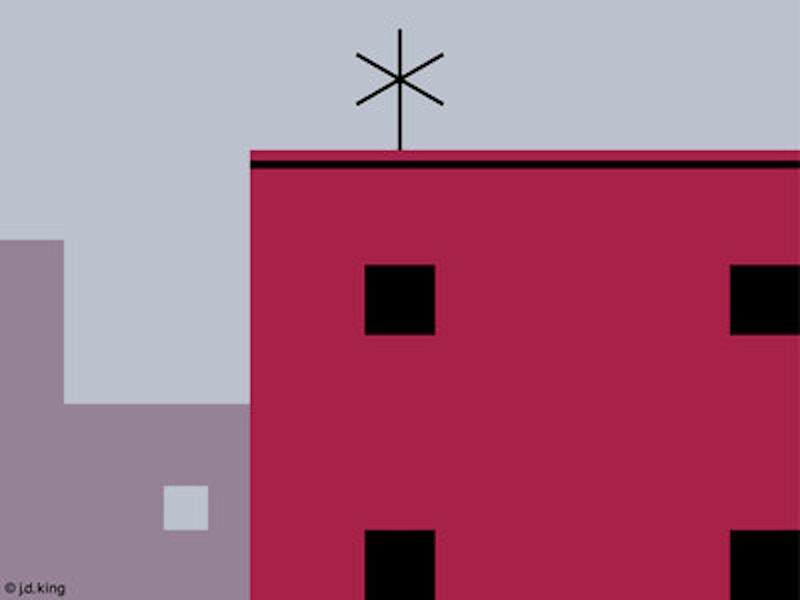 After leaving the hospital that morning, I drove to a greasy spoon for breakfast, and ordered black coffee and a plain bagel with cream cheese. At a neighboring table sat two elderly mobsters: one was a husky guy in an olive suit, the other fellow was thin as cancer, crossed legs revealing argyle socks.

Once upon a time, when their kind owned this crummy town, it spun like a top. No one wasted time with city hall. If a pothole needed filling, or score cried to be settled, a citizen visited the mob to set things straight. But the feds turned the show over to politicians, so now everything is dysfunctional.

As they were leaving, Argyles reached out with today's paper and a smile saying, "Would you like the paper? Nothing but good news today, I don't see my name, that means I didn't get arrested."

I accepted his offer, and returned the smile. It was just about the nicest thing anyone's done for me in the entire 57 years I've lived in this lousy dump. It put me in a good mood. Nothing but good news today.

In the hospital waiting room, I'd looked for something to read in the pile of magazines on a fake-wood tabletop. A fat lady said, "Unless you're a deer hunter or five-year-old retard, don't bother."

So my eyes joined all the other eyes riveted to a TV bolted to a ceiling corner—at least until a really big man with a shaved head entered. His ankles were chained together. So were his wrists. Those wrists were chained to another chain tightly looping his waist. Three cops accompanied him, plainclothes but in a uniform of sorts: caps with team logos, nylon jackets, basketball shorts, little socks that didn't cover their ankles, running shoes, and guns.

The prisoner sat right down, turned his head sharply to the left and up, attentive to the show in progress, a chirpy morning program about home improvements. He seemed calm except for the 10 seconds when his legs jiggled violently. The rest of us, pretending it was normal to be in a room with a chained man and three gun-toting cops, stared at the screen, too.

The prisoner's wait wasn't long, one benefit of being a convict. A cop escorted him while another scouted ahead. The third trailed, looking over his shoulder, walkie-talkie in hand.

My tests, conducted by a nurse-like woman in scrubs, were ultrasounds for my liver. Shooting the breeze, I found out she lives in my neighborhood. We talked about the city. I pegged her for a moron the second she started up about what a wonderful town this is. Not that I contradicted her. I don't argue anymore. Every so often she'd stop yakking to say, "Inhale... Breathe." She smelled nice and was kind of cute.

Walking out the automatic doors into the day, I saw the prisoner and his guards sitting on concrete benches, faces blank, the con allowed to taste freedom but not swallow it, as their van pulled to the curb. The sky was thick slag, you couldn't even tell where the sun was. Another day in paradise. I walked to Visitor Lot C, located my rustbucket Datsun.

After breakfast, home to my third-floor one-bedroom. I turned on the TV.

Around 4:00 I'd head over to my doorman job. The new building supervisor is a 27-year-old jerk with a blond mustache. He'll leave within six months, just like the previous jerks. He listens to talk radio in his basement office.

For what management pays, they'll never get a competent man, let alone one who stays. Meanwhile this dope is complicating my life with his stupidity. He can't even submit basic paperwork without it going haywire. I'm nutty that way: I like to get paid. On time.

There was nothing good on TV, but I didn't turn it off.

Maybe you'll laugh, but there's a crucifix on my wall. I pray to it daily. One part of me still believes like the child I was in parochial school, the other part is a drowning man grasping.

I'd taken the newspaper with me, for the crossword. I love crosswords. And this being Friday, a toughie, the kind I like.

People have this notion about the Sunday puzzle being a challenge, but it's not. Not really. It's big, but I've got a formula to crack it. First, fill in all the three-letter words you're certain of: the "givens," as I call them. Next, the four- and five-letter givens. After that, skim the clues for easy ones: Beatle song titles, etc. You're building a skeleton, a structure that can help you confirm or deny more difficult words. Soon you're ready to crack the puzzle theme. Once you've done that, you're pretty much home free. But Friday and Saturday? Those are the crushers, black squares at a premium. You'd better be well versed in forgotten battles, trigonometry, Chinese emperors, Hebrew months, and obscure mythological figures.

Doing the puzzle, I heard a hornet buzzing against a window. I caught its wings between thumb and index finger, used my free hand to open the window, tossed him out, saying, "If we happen to meet again, please recall this moment and don't sting me."

Humanitarian rescue effort for a hornet? I know. I need to have my head examined.

The commercials got to be too much so I turned the TV off. The doorbell rang. A package? I ran downstairs, hoping for something good.