More than just a recently hot (gentrified) part of Brooklyn. 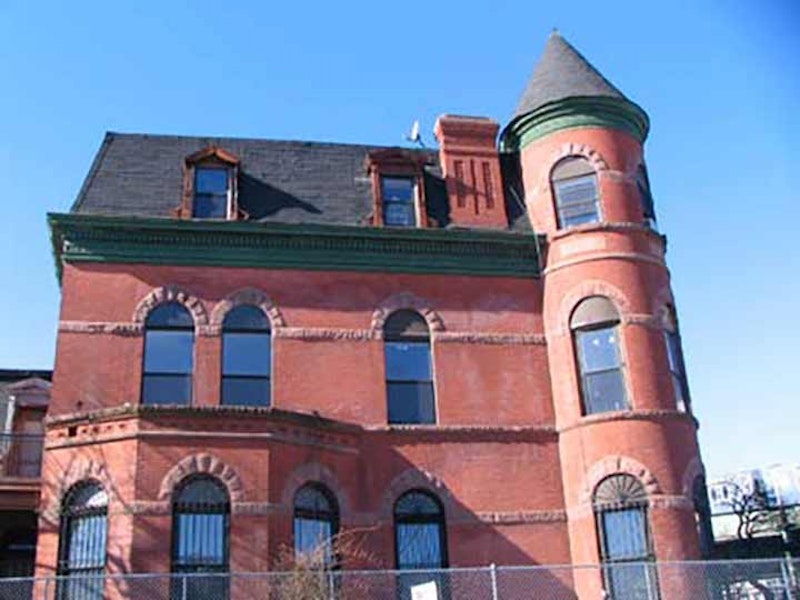 Bushwick, Beer Capital of the Northeast. Not too long ago, that was an appropriate moniker for one of Brooklyn’s oldest neighborhoods. With its large German population in the late-19th century, the working-class neighborhood of Bushwick was home to several breweries that provided jobs and a strong economy for the community. But Bushwick’s storied history began before the beer barons settled there.

Bushwick was a farming community where Dutch settlers grew tobacco for the local market. Later, farmers of Scandinavian, French and English descent moved to the area. Bushwick remained a farming community through the 18th century. Hessian mercenaries settled in Bushwick following the 1776 Battle of Long Island, and began a long tradition of German influence in the neighborhood. “Bushwick” comes from Dutch for “town in the woods.”

The William Ulmer Mansion at Bushwick and Willoughby, which later belonged to explorer Frederick Cook, who claimed to be the first person to reach the North Pole, has been rehabilitated and is now occupied after years of moribundity. The mansion was previously occupied by brewer Ulmer, whose nearby complex on Beaver and Belvidere Sts. (see below) has recently been landmarked by the city Landmaks Preservation Commission. Ulmer also built a long-vanished amusement park in Bath Beach, which today is remembered by the Ulmer Park bus repair facility and storage yard at 25th and Harway Aves. and by the Ulmer Park Library. 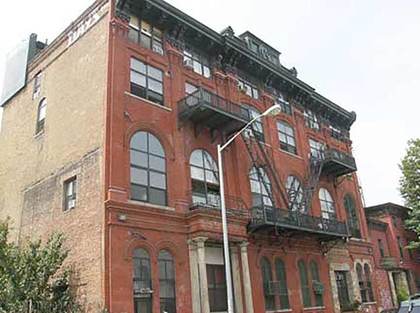 On Arion Pl. near Broadway is the hulk of the old Arion Mannerchör, Bushwick’s foremost German “singing society,” an organization promoting German culture. It later became a mansion and catering hall, but it was converted to apartments (when I first visited in 1999, the building was decrepit). The building is rich in detail of its musical past with initials at the very top and lyre-shaped ironwork on the fire escapes. Arion was a lyre player in the classic Greek stories, and lyre-ish metalwork can be seen on the fire escapes. The cornerstone reveals an 1886 construction date. 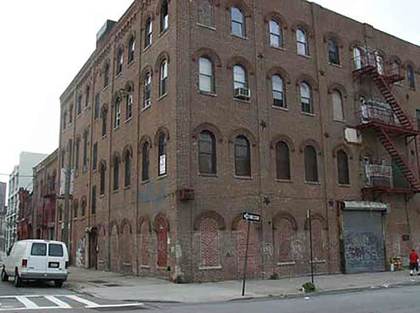 Vigelius and Ulmer’s Continental Lagerbier Brewery (later the William Ulmer Brewery) was constructed in 1872 at Belvidere and Beaver Sts. by architect Theobald Engelhardt. It has been granted landmark status by NYC’s Landmarks Preservation Commission. 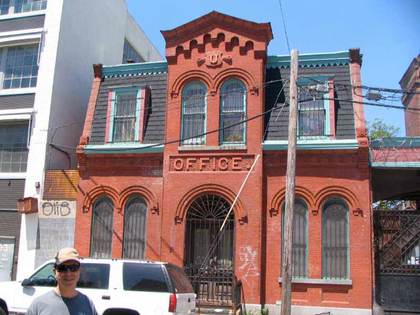 A “mansarded, cast-iron crested house” and a “Little Italianate castle of brick and terra cotta” with an ornate driveway gate over Belgian blocks and a courtyard, wagon house stable in the rear, this is the former offices of the nearby Ulmer Brewery complex, on Belvidere St. next door to the brewery building. It was recently owned by a stone sculptor and marble worker and later, furniture designer/restaurateur Zeb Stewart. In the central bay, molded terra-cotta ornaments “Office” and the brewery’s trademark “U” identify the building’s original function and owner. Note the then-current style of maintaining a period after a title, even on a building front. “The New-York Times.” has lost both its hyphen and period over time. 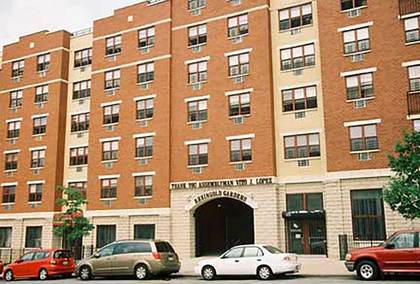 The Rheingold Gardens stand on ground on Bushwick Ave. formerly occupied by the Rheingold Brewery. It held 35 percent of the state’s beer market between 1950 and 1960, while beer drinkers voted each year for the young lady who’d be featured as Miss Rheingold in advertisements. In the 1940s and 1950s in New York, “the selection of Miss Rheingold was as highly anticipated as the race for the White House.” Rheingold advertised on Nat King Cole’s TV show when other companies stayed away and aired TV commercials with Latin and African-American actors, along with personalities like John Wayne, Jackie Robinson and the Marx Brothers. The Rheingold brewery closed in 1976, and the brand was revived in 1999 with a new Miss Rheingold campaign. This time instead of white gloves Miss Rheingold contestants wore piercings and tattoos. Miss Rheingold awaits another revival, since Kate Duyn was the last winner in 2003. 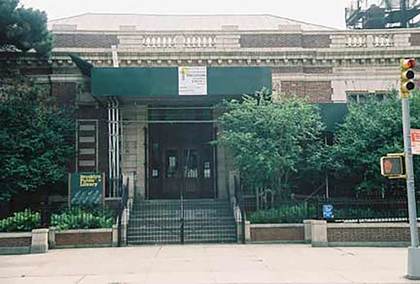 In 1901, the Scottish philanthropist/industrialist’s organization, the Andrew Carnegie Foundation, gave $5.2 million to New York City for its libraries across the five boroughs. This started a remarkable project that would go on to build 1680 Carnegie libraries across the United States and another 800 in Canada, the United Kingdom, and elsewhere in the world. Carnegie paid for the buildings, but the city would have to buy or acquire the land, buy the books, and provide for maintenance and upkeep, in perpetuity. Carnegie helped set up the library commissions and boards. Sixty-seven such libraries were constructed in NYC over the 20th century’s first three decades. Of those, eight have been razed. I’d like to visit the remaining 59 and chronicle this remarkable project that adds to New York city’s richness of historic architecture.

The Brooklyn Public Library’s DeKalb Branch was constructed in 1904-05 as one of the first branch libraries built in the Borough of Brooklyn with the money provided by Andrew Carnegie’s multi-million dollar gift. 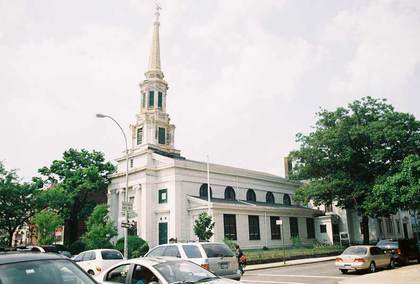 The steeple is teetering and in need of a paint job but the South Bushwick Reformed Church, a “wedding cake white,” Ionic-columned church, built in 1853 and known as The White Church, remains a Bushwick touchstone decked out in clapboard and milk glass. The cross street is named for its first pastor John Himrod. It’s one of the tallest buildings on Bushwick, but not the tallest in the neighborhood. 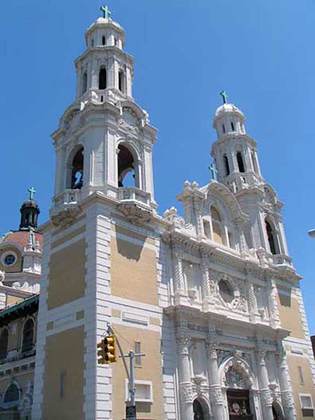 St. Barbara’s, on Central Ave., a few blocks away, has it beat by a wide margin with its twin spires. One of the tallest buildings in Bushwick and one of Brooklyn’s tallest, St. Barbara’s Roman Catholic Church can be seen from all over the neighborhood. It’s a gleaming white and cream twin-towered Spanish Baroque Catholic parish. It was constructed in 1910 by prolific architects Helmle and Huberty with a sizable donation by brewer Leonard Eppig—the church was named for his daughter Barbara. The parish has served a German, then Italian and now a Hispanic congregation.