My bully is better than your bully. 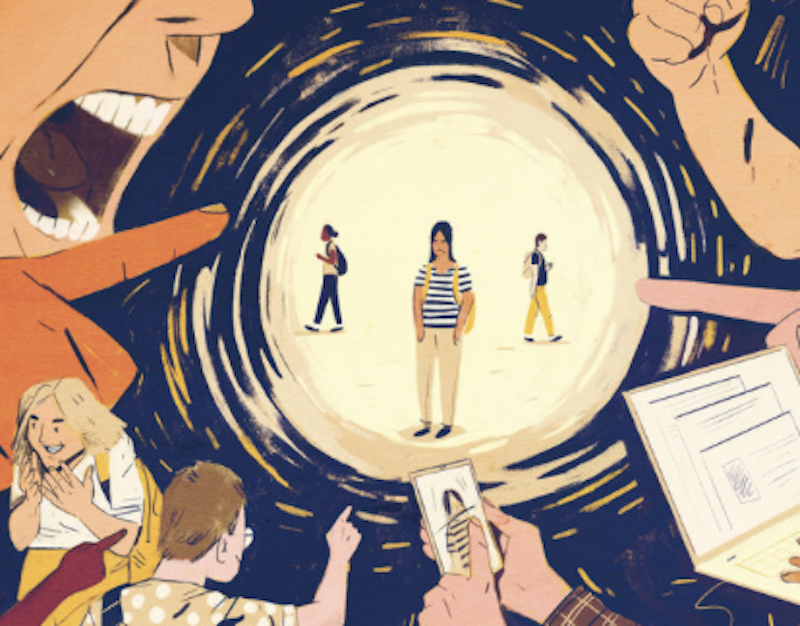 Acquiring adequate statistics on bullying can be tricky because data collection methods rely on the perception of an individual or group to determine what authentic bullying is. It also means that two individuals, experiencing the same level of harassment, may define their experiences differently. I’m acknowledging this before making the assertion that I was undoubtedly bullied as a teenager.

The same classmate habitually and demonstratively called me a “fag” every day in the middle school locker room during seventh- and eighth-grade gym class, or found other ways of intimating to anyone who’d listen that I might be a homosexual. This epithet was odd because I’m straight, have always been straight, and can’t imagine what vibes I might’ve given off that would have led someone to suspect otherwise. In fact, I’d spent nearly all of sixth grade contending with a variety of classmates who poked fun at me for allegedly only liking white girls. Of course, middle school bullies probably don’t devote much time to ensuring that their insults are factually accurate or consistent with prior insults.

I’d progressed to middle school from an elementary school in which most of my classmates had been white, so I logically retained my friendships with those students as we advanced to middle school. Also, my father is white, which provided the bully with an opportunity to occasionally rotate in a barb about how my mother had sold out the black race by marrying my father, along with how I was an “Oreo” as a result of the interracial marriage. On one occasion, the latter insult was followed by the bully forcefully bouncing a basketball off of my face after I’d shown him up—to the limited degree that I could—during an eighth-grade game of two-one-two basketball.

I wasn’t the only target of this particular bully. One of the great shames of my life was my reaction to learning that another student from our middle school brought a gun to school in the hopes of employing a permanent solution to a temporary problem. Thankfully, the gun was discovered, the student who brought the gun to school was expelled, and the incident was almost immediately forgotten. However, in the moment, part of me fantasized about how much easier my day-to-day life might’ve become if my fellow bullying target had been able to utilize the weapon he’d been hiding in his backpack.

Why didn’t I stand up for myself? There are several answers. First, I probably would’ve been stomped out. My bully had at least two inches of height and 40 pounds of body weight on me, even in middle school, so any visions of fighting this person and emerging victorious were rooted in pure fantasy. Why didn’t I solicit the help of teachers and faculty members? The answer to that question is a bit more complex.

In my traditional family, we believed that there were straightforward solutions to issues like the bullying I’d been facing in school. From a distance, it might’ve seemed like the logical solution would be to alert my parents, who would then relay the issue to school administrators. From there, a face-to-face meeting could’ve been orchestrated with the parents of the bully, his parents could enforce punitive measures at home to deter the bullying behaviors, and then all would be well in my adolescent world.

However, this approach would probably only have served to magnify the scope and degree of the bullying I was facing. Male bullies are often raised by single mothers, and they’re often taller and physically stronger than their mothers by the time they’re 13 years old. Physically, those single mothers are incapable of enforcing punishments at home, especially if they’re working full-time jobs and are unable to personally interact with their children before 5:30 p.m. each day. In cases like these, if a woman can’t physically force her son to do something, there’s virtually no chance that he’s going to listen to her solely out of respect.

In addition, even if this bully’s parents were capable of enforcing in-home corrective measures, they would’ve been unlikely to influence the fallout I would’ve experienced in connection with being labeled a “snitch” in my school. On one occasion, when it was erroneously pointed out that I’d supposedly tattled on a classmate during my seventh-grade history class, one of the offended student’s larger friends promptly kneed me in the face. The teacher noticed this, walked me down to the counselor’s office, and arranged a meeting between the first student and me for early the next day. We talked things out and ostensibly parted on friendlier terms, but the next week, his large friend punched me in the ribs during gym class. The following year, the student I’d negotiated peace with kneed me in the face after I’d burned him for a touchdown during a gym-class scrimmage.

In my experience, I could either suffer through the bullying in silence, or snitch to someone in a position of power and end up targeted more aggressively, and by a greater number of individuals. The only way my parents realistically could’ve helped me would’ve been to move us to another public school district, or to shuttle me off to a private school. Neither option was on the table.

My run-ins with my principal bully were not confined solely to our junior-high environment. During my sophomore year of high school, my heart sank when I walked into health class for the first time and noticed that my adversary was present. As if no time had passed, he immediately accused me of being gay and ridiculed my sport of choice as being a “gay sport” (I’d been a swimmer for many years).

By that point, I could’ve verbally annihilated him simply by suggesting that he was out of shape, awful at everything he’d ever tried—academically, athletically, or otherwise—and was simply jealous because his parents didn’t love him enough to care whether or not he continued to fail in all aspects of life. What would’ve happened? I probably would have gotten beaten down, but that’s beside the point. I’d already realized that I had too much to lose in short- and long-term successes if I got into a fight and received a suspension, or got expelled.

I almost found myself pulled into such a do-or-die scenario when I was drawn into a dustup with a different, far more reasonable classmate much later in the semester during health class. After I’d patched things up with the classmate that I’d managed to offend—a person I considered a good friend in every exchange both before and after that episode—my perpetual nemesis marched forth from the back of the classroom and negotiated a bounty with the student I’d offended.

“I like your gold chain,” the bully said. “I’ll beat his ass for you if you give it to me.”

Even in that moment, I knew that some semblance of my life’s direction would hinge upon the answer of the upset student, who was unaware of my history with this bully.

“Just think about it,” the bully continued, on his way toward the door. “All I need is the chain.”

That was the final run-in I ever had with this person, but it left a more profound impression on me than any of our prior interactions. He’d been willing to accept a bounty in exchange for pummeling me, and I’d neverdone anything to slight him one way or another. For me, that cemented him as an irredeemable individual, and I was certain he’d one day end up in prison.

He didn’t end up in prison. In fact, he wound up serving in the military, and then enjoyed a high quality of life marked by a respectable career, a beautiful wife, and the births of several loving children. However, he passed away just prior to his 40th birthday. And, I was devastated by his death.

Fortunately, with age comes wisdom and an elevated degree of understanding. I can’t imagine what life was like in this man’s household during the nascent stages of his life for him to consider the unprovoked persecution of some of his classmates to be such a necessity. An obsession with sexual orientation at such a young age, to the degree that homosexual taunts become a go-to insult, is often preceded by some form of in-home abuse or harassment by an otherwise trusted family friend or family member.

I’m not saying that this person was in any way abused in his household, nor am I condoning the havoc he wreaked across more than two years of my teenage development... but I’ve forgiven it. After all, for him to have been filled with such unwarranted animus toward others also means he certainly contended with a monumental measure of pain.

The death of my erstwhile bully places his children in the unenviable position of having to grow up without a father, which is accompanied by myriad forms of hardship. Honestly, my heart is broken for them. After all, the only loss I feel from this tragedy is the loss of an opportunity. As an adult, and knowing the type of man this former bully grew into, I imagine we might’ve managed to sit down, have a few drinks, exchange some stories, laugh about them, and then walk away with newfound respect for one another.

Regrettably, such an exchange will never happen, but I have it on good authority that this man who tormented me for so long during our intersecting adolescence repeatedly admonished his own sons not to become bullies themselves. No justice I might’ve sought in my youth could have yielded a more redemptive and satisfying turn of events. Bullying has no victors; only victims. Yet, that doesn’t mean it can’t be bookended by forgiveness.

I’ve forgiven this man who was a teenage villain when he dealt with me years ago, and I can acknowledge that he was a hero during his life when it mattered the most, and to whom it mattered the most. I also would prefer for people to judge me through the lens of the redeeming behaviors of my adult life, and not based on the worst moments of my indiscriminate youth.