Rooster recalls a moose named Bruckhard and laments the demise of “true friendship.” 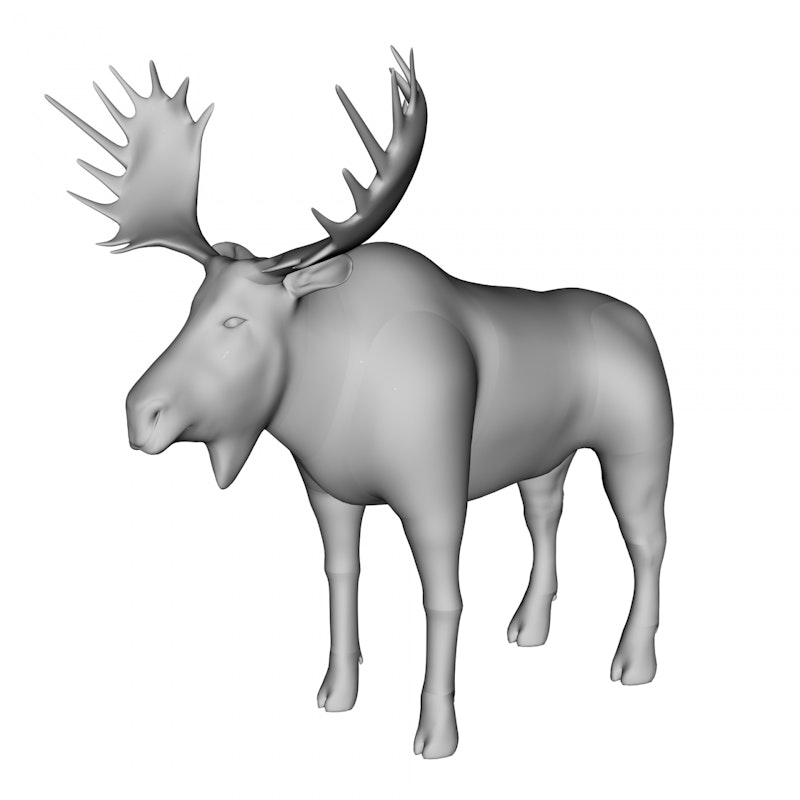 Pictured: A rough digital approximation of Bruckhard the Moose

One of the more disturbing developments of recent years is the obliteration of friendship. You may say this is an absurd statement, but think about it: how many true friends do you have? Real friends. People you can call in the middle of the night if you’re contemplating suicide, if your wife is pregnant, or both. Look, it’s happened to me in both directions. Sometimes these calls are not life or death—I remember being woken up in the middle of the night sometime in July 1977 by Bruckhard, a moose I met in Vietnam. Bruckhard was unshakeable: it’s rumored Indigenous Americans revered him, incorrectly assumed he was an archetype rather than an individual, and so Bruckhard became a major part of the lore in a handful of Indigenous American cultures, particularly in the Northeast and the Southwest. Bruckhard told me Sitting Bull himself christened him Datakota, or “one who could not be flummoxed.”

I don’t remember Sitting Bull ever mentioning any moose or meese when I paid my respects, but no matter—Bruckhard the Moose was insecure. I knew this, so I never called him on his lies. Well, honestly, “lies” is going a bit far. He never meant any malice. Intentions count, but actions matter more. Even here, Bruckhard was honorable. He had a very low personal opinion of himself and was disturbed by praise, admiration, and respect. “You don’t understand, Rooster, I don’t deserve it,” he’d cry to me over the phone, thoughts of suicide his only bedside companion through most of the 1970s. Bruckhard was hassled almost everywhere he went on account of his rather large horns and imposing body. The tragic irony of Bruckhard’s life was that this Dionysian body belonged to such a meek and forgiving soul.

“They tried to de-horn me today. They called me ‘the Devil’—no, it was worse than that. ‘The New Jersey Devil.’ I don’t want anyone to think that I’m from New Jersey, Rooster! It’s a HELL Zone!” I calmed Bruckhard down, asked him why he was so eager to “eat a gun,” in his own words. “There’s no place for me here,” he moaned, “I’m an outsider in an insider’s body. This can’t be fixed. I don’t wish to have my horns removed but if that’s what it takes to lead a quiet, safe life, then so be it. But I’ll never be able to reduce my body mass, and that’s why I’m cradling the barrel of this beautiful Remington shotgu—”

Before he could finish, the line went dead. I just about had a heart attack as I tried to redial and get Bruckhard back on the horn. No, he hadn’t “done it,” he hadn’t distributed his entire life and personality and memories all over his bedroom wall. He was still there, suicidal yes, but still there. “Stay with me, Brucky…” I heard him crying. It was the first time I’d ever heard of such a large animal weeping, much less heard it myself. The sound was titanic, as if it could move mountains. I held the receiver away from my ear as I prepared to respond with some benign well wishes, exhortations to “stay with us,” all that jazz. I’m adamantly opposed to clichés, but sometimes, they’re all that’s available. “Support system” was not coined yet, but Bruckhard knew he had at least one person he could call in a jam.

Bruckhard stuck around, but not for long. He took a long walk off a short dock in Paramus (don’t ask) around 1983. The last time I talked to him, in the fall of 1982, he was despondent again. “How can they refuse me?” he cried. “I’m as good a moose as any Canadian moose—why does it matter that I was born in America? I’M NOT EVEN A CITIZEN!” What could I say? Bruckhard was right, this was a severe perversion of justice, and I don’t mean in the technical sense, but rather the spiritual sense. Yes, one must recognize that the universe wanted Bruckhard to become an officer in the Canadian Mounty—in fact intelligent design demanded it—and yet he was kept at the door of his destiny by foolish humans. This world sucks sometimes.

Bruckhard drowned himself in 1983 and no one cared because he no longer cared about his own life. The only thing giving him any purpose or meaning was gone. He could never become an officer in the Canadian Mounty, and the American police forces generally didn’t accept moose or meese into their ranks. Bruckhard was socially awkward, shy, and probably “on the spectrum” (autistic). He would’ve been a good officer, I think. And you took that from him. I’ll never forgive the Canadian Mounties, nor the American government, nor myself for not calling him on New Year’s Day 1983. I had a good time that year—Monica and I were wing deep in blow for most of the decade—and I neglected to call Bruckhard back like I said I would. Too hungover, too blasted, too out of it to be a competent friend, someone to lean on. He never called again and I never spoke to him again. Whenever I see someone out of a job, on depression medication, or eating fast food, I think about destiny, and I think about Bruckhard. He deserved so much better, and you couldn’t give it to him. You are responsible, world. YOU!

Toast is ready. I can’t wait to try my new jam… key lime! Well, I have fun.