A trip through one of the few neighborhoods in Staten Island that doesn't look like Mallville, USA. 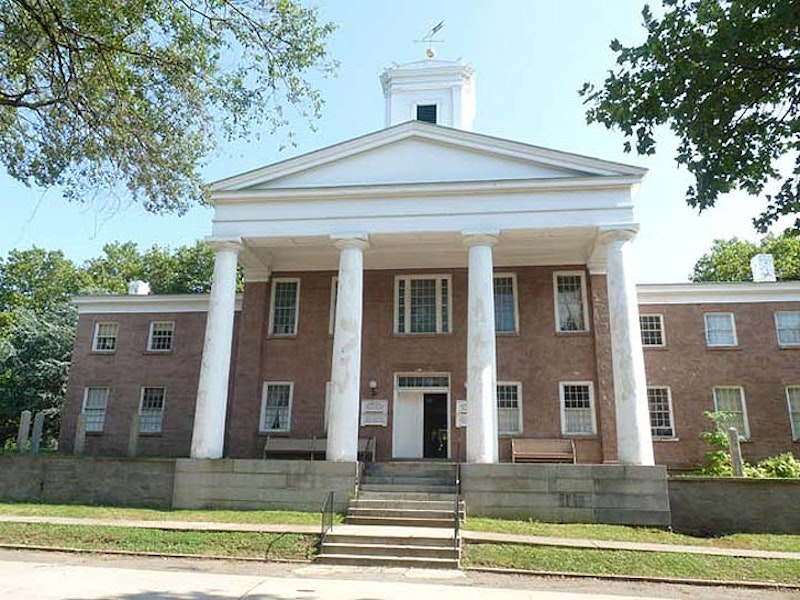 The combination of overcast skies and muggy weather makes it hard for me to get started in the summer. I take advantage of whatever time off I have and get out of Little Neck for a few hours.

On more than one July 4th I’ve been drawn to Staten Island’s Richmondtown. It doesn’t possess the look of NYC’s other neighborhoods, with grid-patterned streets filled with detached homes, Fedders specials of rows of brownstones, but also doesn’t look like so much of what Staten Island is becoming: Mallville, USA. I’ve been in Richmondtown on the 4th three times, and perhaps a dozen times overall.

Knowing the toll modernization was taking on the island, and perhaps presciently imagining the devastation to be wreaked on Staten Island’s old and out-of-the-way places by the opening of the Verrazano-Narrows Bridge, Historic Richmond Town was established in 1958 by the Staten Island Historical Society and the City of New York at the area surrounding the junction of Richmond, Richmond Hill, and Arthur Kill Rds. Colonial-era homes from the island were moved to this 25-acre site over the years, and it’s acquired its own culture, with costumed guides, holiday happenings, and a studied 19th-century atmosphere. On July 4th activities include book readings, tableaux vivants (costumed performers re-enacting scenes from famed paintings), pie baking and ice cream making using 19th-century implements. There were demonstrations of Richmondtown’s still active print shop, woodworking, and even a shooting exhibit.

Richmondtown’s buildings have been arranged along Richmond Rd., Center St., Court Pl., and Arthur Kill and Richmond Hill Rds. The area’s more properly called Richmond and is located at the foot of the ridge of high hills at the center of the island that include Ward’s, Grymes, Emerson, Todt and Lighthouse Hills. Richmond Creek, a thin stream here, becomes much wider as it enters the Fresh Kills Landfill several miles to the west. Near Richmondtown we find expansive LaTourette Park and Golf Course, the picturesque Staten Island Lighthouse, the Jacques Marchais Tibetan Museum, “Crimson Beech” (Frank Lloyd Wright’s only residential building in NYC) and the spooky ruin at Heyerdahl Hill. It’s not near the Staten Island Railway, but can be accessed via the S74 bus, Tottenville-bound, from the ferry terminal. Motorists can use the Staten Island Expressway, exiting at Slosson Ave. and then following Manor Rd., Rockland Ave., and Richmond Rd. to the village.

Shown above is one of the most important historic buildings in Staten Island: the old Richmond County Courthouse was built in a Greek Revival style with four imposing Doric columns on its porch in 1837, the third incarnation of the courthouse on the site. It was the main courthouse in the borough until 1919, when most countywide governmental buildings moved to St. George. It’s currently the Museum’s visitor center and museum shop. 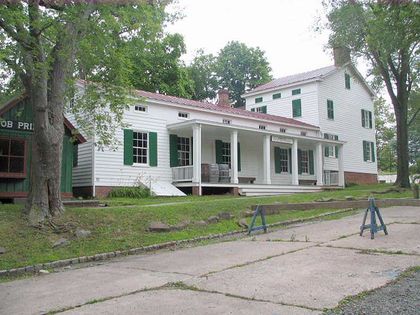 In this 1840 building on Court Pl., native to Richmond Town and owned by Stephen D. Stephens (who lived next door in he house on the right) and later Joseph Black until 1926, an old-time general store, complete with potbelly stove, was reconstructed in 1964 (the building was partially demolished in 1944). It serves as Richmondtown’s post office.

Partially seen on the left is a small shack marked “job printing”; this was originally a one-room grocery, the Eusabia Johnson store, built in Eltingville in 1860. It has been recast as an old-fashioned print shop from before the days of computer screens, keyboards and even typewriters, when “leading” meant an actual slug of lead inserted between lines of type to increase spacing. 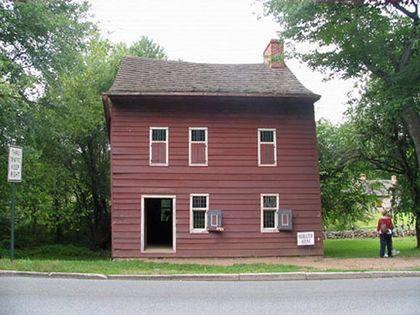 The Voorlezer’s House is the second-oldest structure in Richmondtown. Like other buildings native to Richmond Town, the original nature of this house was unsuspected until careful research by Staten Island borough historian Loring McMillen in the 1930s. It was built in about 1695 by the Reformed Dutch Church and functioned as a church, school and home for the lay minister/teacher (voorlezer, meaning approximately “to read in front of” in Dutch) until 1701. The ensuing centuries found it used as a private residence, storefront and lunch counter until 1939, when restored by the Staten Island Historical Society. It’s now a National Historic Landmark and is recognized as the United States’ oldest schoolhouse.

The building has been carefully arranged to resemble an 18th-century schoolhouse, in which the schoolmaster lived when school wasn’t in session. 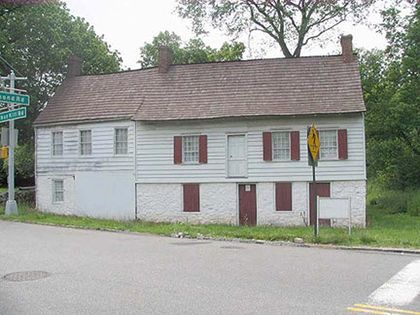 Treasure House, where three of Staten Island’s major roads (Arthur Kill Rd., Richmond Rd., and Richmond Hill Rd.) meet, was built here in 1700 and was enlarged between 1740 and 1860. The building has housed saddlemakers, tanners, shoemakers, bakers, and has been a post office. During the Revolution, the story goes, British troops hid away a cache of sovereigns worth about $7000. The money was found by painters in 1854. 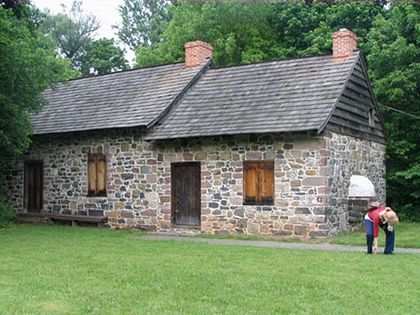 Just east of the Boehm House there’s the Christopher House, constructed with fieldstone between 1720 and 1730 by Joseph Christopher. It was moved to Richmondtown from nearby Willowbrook. The building burned down in 1944 after serving as a private residence, restaurant and hotel. Its site is marked only by artifacts such as an anchor, cannon, and millstones. 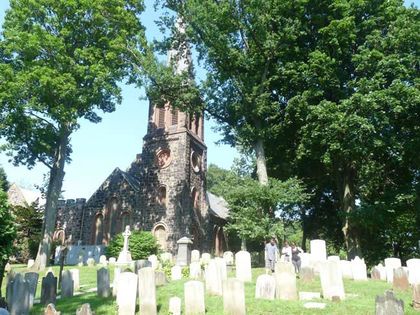 The Episcopal Church of St. Andrew on Richmond Hill Rd. was granted a charter by the British Queen Anne in 1712, which remains in the possession of the church today. The church barracked British troops during the Revolutionary War, and traces of their fortifications can be detected on Fort Hill to the rear of the church. The present church is a Romanesque structure built in 1872. The churchyard contains dozens of stones dating back to the early-1700s, recognizable by the winged angel carvings at their tops.

Richmondtown was the site of a Revolutionary War skirmish on October 16, 1776, shortly after a peace parley at Tottenville failed. Gen. Hugh Mercer, leading the patriots, was victorious, but was shortly routed at nearby Greenridge. 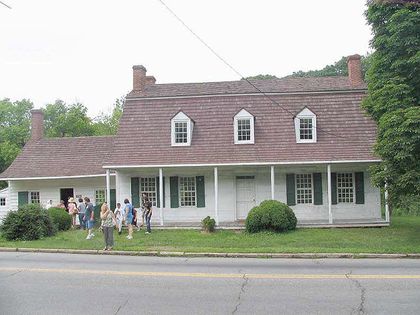 The Dutch Colonial Guyon-Lake-Tysen House was built in New Dorp by Joseph Guyon in about 1740. (His name inscribed in one of the walls.) This was once the seat of a 112-acre estate that included granaries and cider houses; it passed through the Lake and Tysen families and was then donated to Richmondtown Restoration and moved here to Richmond Rd. in 1969. Of all Richmondtown’s ancient houses, this is the one where both tourists and guides have felt the presence of spirits, as cabinet doors have been thrown open with no logical explanation, unaccounted-for footsteps heard upstairs, and faces seen peering out the windows of the building before the doors have been unlocked. Perhaps some of the families’ members are unhappy that their house has been moved down the road.