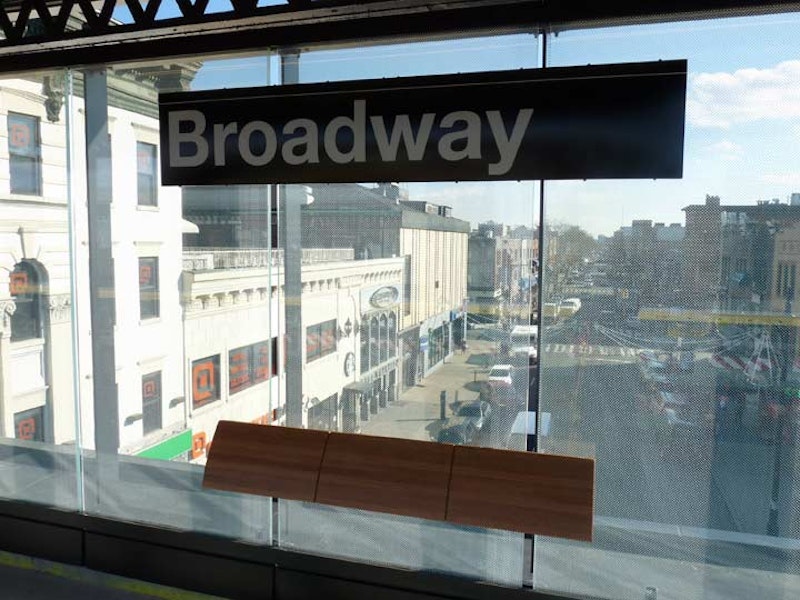 There’s been a lot of news about the subways and transportation in New York City lately, most of it about the deteriorating infrastructure in the more-than-century-old system. Extensive re-routings, rush-hour delays and cancellations on weekends are now the norm. Most subway lines in NYC share trackage, so problems on one line can affect others. Recently, the Metropolitan Transit Authority was planning to shutter the L train, a formerly sleepy but now vital link between the East Village/Midtown Manhattan and Williamsburg, Bushwick, East New York and Canarsie in Brooklyn. “Superstorm” Sandy had wreaked havoc in the tunnels, with salt water seeping into everything including electrical conduits that power the trains. While the MTA’s original plan would’ve cancelled service for 15 months, Gov. Andrew Cuomo convened his own panel of experts and devised a new plan that would replace the conduits and enact other repairs in a different manner and schedule that would force drastically reduced service overnights and weekends for a longer period, but keep the line open.

There’s not much to celebrate about the trains. But I find ways. I’ve always been an infrastructure enthusiast, taking in the oldest stations with their elaborate Beaux-Arts decorations, through the mid-period mosaics and severe IND Machine Age stations of the 1930s, up to the postmodern stations that seemed to cover everything in glazed orange bricks. In recent years, the MTA has brought in a new phase of subway architecture. The new Second Ave. extension of the Q line created four new stations, three of which feature large panels of contemporary artwork by the likes of Chuck Close. A number of stations have been “refreshed” along the 4th Ave. BMT route in Brooklyn and the IND stations along Central Park West. I haven’t yet visited them all, but the ones I have include large illuminated wall panels, new “countdown clocks” and phone chargers.

The new elevated stations along the Astoria Line serving the N and W trains are a different beast entirely and are somewhat revolutionary. One thing you notice right away is that the 30th Ave., Broadway (just reopened this week) and 36th Ave. stations (the 39th Ave. station will soon follow) somehow seem larger even though the basic footprint has not changed. Station renovations included, according to the MTA, “repairs to deteriorated concrete and steel structures, and rehabilitated entrances including staircases, railings and canopies; improvements and repairs to mezzanines and platforms; waterproofing; security cameras, glass barriers and railings for increased light and transparency; improved signage for easier navigation, including digital, real-time service information; and glass and wire mesh platform windscreens for added light and safety.”

A major change is that the back walls of the stations are, for the most part, no longer opaque. Thick glass or plastic panels have been installed, separated on occasion by black walls, but a clear view of the outside environs is now possible for the first time. 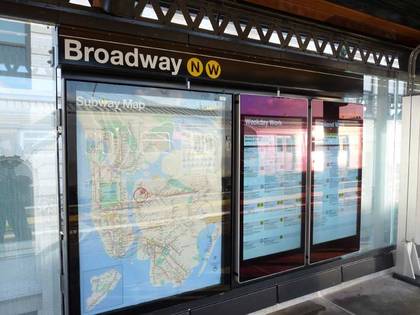 Here we see large illuminated system maps and message boards describing route changes (most of the subway infrastructure remains decrepit and weekend and off-hour re-routings are the rule, and descriptions of the changes necessitate lengthy lists). While the basic canopies of the elevated stations are intact, the platforms themselves are new and the roofs, now soothing wood paneling, are new as well. 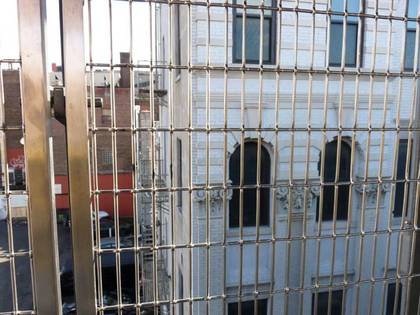 The old metal windscreens are gone, replaced by metallic mesh. This provides more views and airiness. It’s one aspect of the remakes I have an issue with because in the winter, these stations will be cold, open to the wind. However, there is a mitigating factor… 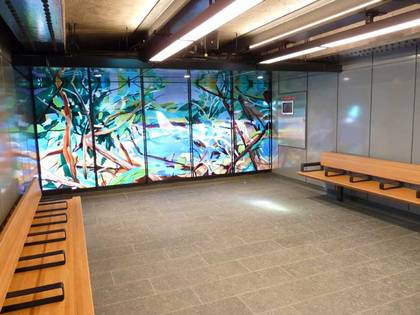 …I’ve no idea where the MTA scared up the space in these formerly cramped stations, but each station on the Astoria el now has, or will have when all the station renovations are done, a waiting room! The rooms face countdown clocks at the turnstiles, so passengers might opt to use these rooms instead of standing on the windy platforms no longer protected by windscreens. I never knew there was enough room in the old station for these, pre-renovation. The MTA will have to strive to prevent these “lounges” from becoming homeless havens in the cold months. I haven’t seen anyone using them yet, and it might take awhile for people being conditioned to the presence of waiting rooms in subway stations.

Like other such rooms and entrance areas, new public art has been installed, in this case, Diane Carr’s “Outlook.” Bob Singleton, director of the Greater Astoria Historical Society, says that for a while the MTA had inquired about using some historical images, but ultimately went with a more abstract work, following the example of the other stations. 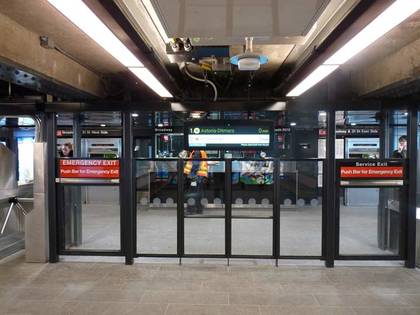 Clear glass paneling makes the “fare control” area airier. “Countdown clocks” are more numerous in these stations; lengthy platforms in older stations, the MTA has been stingier, with often one clock serving a platform long enough to fit 10 subway cars.

I think the MTA should be spending its money on updating signals and restoring full service on weekends. But I can’t argue with the aesthetics of these new stations. I wonder how modern they’ll seem 20 years from now, though.