Women, All Women, and Susan Faludi

I could’ve sworn they said... 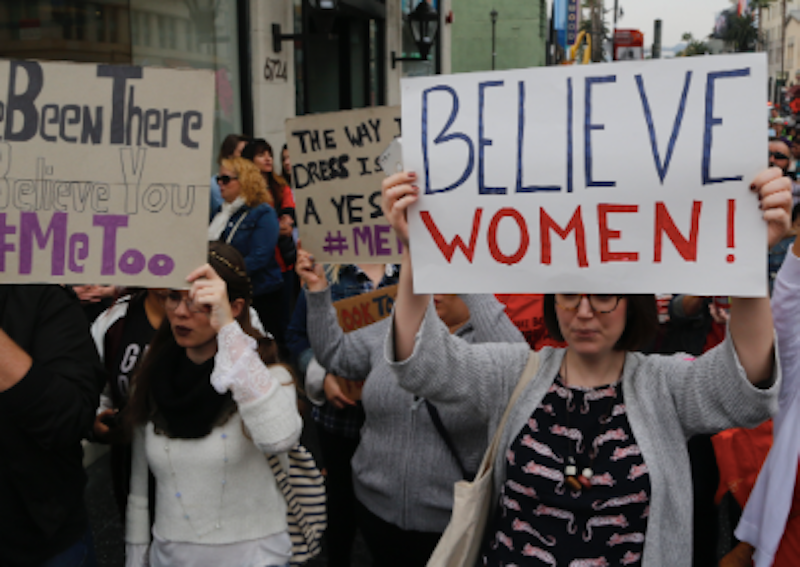 Susan Faludi has caught out conservatives touting “Believe All Women” as the alleged slogan of the feminist movement. Searching databases, she establishes that the phrase usually pops up when rightniks are telling each other what feminists supposedly say. She figures the rightniks are off base because feminists tend to disagree with each other. “This is why the preferred hashtag of the #MeToo movement is #BelieveWomen,” Faludi says. “It’s different without the ‘all.’ Believing women is simply the rejoinder to the ancient practice of #DoubtWomen.” That last hashtag is Faludi’s joke, of course. She doesn’t claim that the enemy goes around saying, straight out, “Doubt women,” nor does she claim that there was Twitter in ancient times. She does seem to think that an inserted “all” makes all the difference.

But this difference is hard to locate. Any woman is a woman. In fact all women are women. So if we’re going to believe women, flat out, we’ll have to believe all women. As Faludi says, this can turn out badly: “History offers ample evidence of the horrors that can ensue when a woman or a man is believed who shouldn’t be: Remember the Scottsboro Boys?” Woody Allen said the same thing. Of the actors who have turned against him because of his alleged child abuse: “Some said it was now their policy to always believe the woman. I would hope most thinking people reject such simple-mindedness. I mean, tell it to the Scottsboro Boys.” We have agreement between one of the country’s best-known feminist writers and one of its best-known alleged predators.

To hear Faludi tell it, they must’ve agreed all along. “Good luck finding any feminist who thinks we should believe everything all women say—even what they say about sexual assault,” she tells us. Faludi might reinforce her claim by citing feminists who, during the Kavanaugh battle and the #MeToo eruptions, stipulated that a female accuser shouldn’t be automatically believed. She cites no such people. She does quote a Hillary Clinton tweet that Faludi seems to think was distorted by the other side. “To every survivor of sexual assault … you have the right to be heard. You have the right to be believed,” Hillary tweeted. (The ellipsis is Hil’s, nothing was left out.) Is “every” very different from “all”? And if someone has the right to be believed, don’t the rest of us have to believe that person? Now, since most sexual assaults are perpetrated by males on females, don’t we have to believe all… oh dear. No wonder Juanita Broaddrick was pissed.

Right-wing blogger Allahpundit dug up this tweet from the Women’s March: “We believe ALL survivors.” I don’t get out much, but I remember a woman friend telling me that nobody would ever make a false accusation of rape, given the grief accusers get from defense lawyers and rabid members of the public. She was surprised to hear about the Duke case and the Conor Oberst case, and later on came Jackie and Rolling Stone. The sad truth is that people will do anything and people will say anything. Almost as sad: For an idea to catch on, it has to be believed by a lot of stupid people. To fit into their skulls it may undergo radical streamlining. Once inside it suffers further damage. Soon enough college freshmen announce that blasting their stereos is free speech. Or pious nitwits tell us what we must believe regardless of available facts.

But wait, Hillary’s not a nitwit, just a politician. And my friend wasn’t stupid, just young and naïve. I shorthanded my point just now, and I think it’s fair to say that feminists have shorthanded theirs. I stand by my point and I agree with the feminists’ point as I understand it—that accusations of rape or assault have been routinely dismissed and they shouldn’t be. But my friend might feel that what I’m saying in this paragraph is very different from what I said in the last paragraph. Similarly, what Faludi is saying now isn’t what feminists said prior to Tara Reade. Feminists went big and bold, as sloganeers are wont to do. But now the slogan has run into some very prominent facts, namely that a “manipulative, deceitful” woman who abuses people’s trust now says she was raped by our country’s chief hope for escaping Donald Trump. Accordingly, we’ve been given permission to get our common sense out of hock and put it to use. Better late than never, but people may remember the original demand, and an op-ed saying they didn’t hear what they heard isn’t going to help matters.