Chess and Its Alternatives

Where complexity borders on chaos. 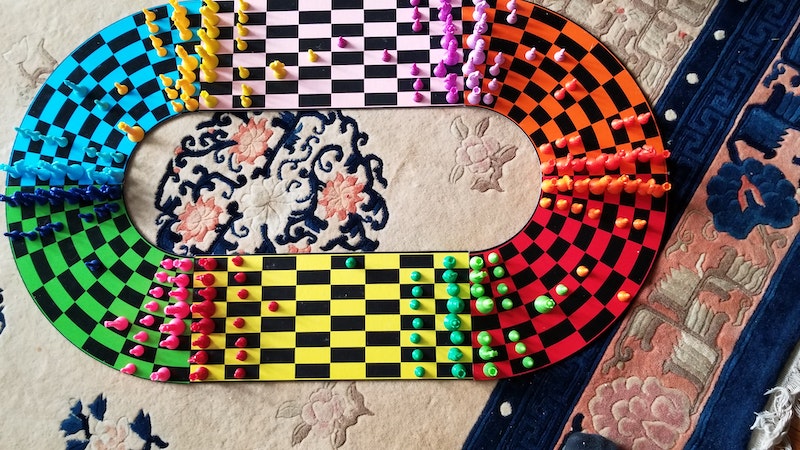 Chess was a staple of my childhood. I remember the first time I won against my father, sometime in elementary school; playing on black, I mimicked white’s opening moves, a generally dubious strategy that may have held some advantage in being irritating and unexpected. Wie Spielt Man Schach (How to Play Chess) was the title of the bilingual rules booklet we had, though my father’s English was as fluent as my German was negligible.

I’ve played chess for nearly half a century, becoming pretty good for an unranked, non-tournament player and taking an interest in the game’s broader implications: its multi-faceted relevance as a form of recreation, tool of education, challenge for human and artificial intelligence, and a source of analogies and symbols pertinent to many areas of culture and society. In recent years, the idea that some puzzling Trump action reflects a strategy befitting higher-dimensional chess has been voiced by supporters and, sarcastically, by opponents.

For decades, I hoped computers wouldn’t achieve chess superiority over humans, a hope that sank when Garry Kasparov lost his 1997 rematch against Deep Blue (I was in the audience for one game) and as grandmasters subsequently lost the ability to compete against programs. In recent years, the program AlphaGo and its successor MuGo have seemed to open an ascendancy of neural nets trained through self-play and encoding no human chess knowledge.

Besides the standard game, there are many chess variants: the starting positions of the pieces, or the use of non-standard pieces; the size and shape of the board or boards; the number of players; the rules for such operations as castling, pawn promotion, draws, checks and checkmates; whether the game retains its symmetry between the contending sides, or its transparency, where all players can see the full board; whether some element of chance is introduced, as with a dice roll determining what pieces can move.

This makes for an interesting ferment, though no variant has yet approached the popularity of regular chess. A relatively popular one is Fischer Random Chess, also known as Chess960, invented by the troubled and brilliant late champion Bobby Fischer; relatively moderate in its differences from standard chess, this variant randomizes the initial placement of the pieces behind each row of pawns, making for a more varied set of game openings.

Such variants open new vistas for humans and computers alike. To a large degree, programs need to be retrained from scratch in moving away from standard chess, as with any specialized activity; that’s starting to change with the advent of neural nets like MuGo that can identify rules through game-playing rather than getting them preprogrammed. Still, there’s a long way to go before computers have abilities to shift among diverse games, invent new ones, or what may be a far greater hurdle, to grasp that there’s a world beyond the game board.

During the pandemic, my son and I have been playing both standard chess and a variant called Pi, which I hadn’t heard of when I bought it months ago at a church fundraiser. The game has boards that can be arrayed into various circular, oval or other shapes. Multiple sets of kings and their pieces are controlled by two or more players. Queens and rooks have the potential to travel long distances on an open column, landing or taking a piece far from home.

Unlike the settled rules of standard chess, the rules of Pi seem to be a work in progress, with alternatives given in the instruction sheet and not all ambiguities addressed. The product’s creators labeled it “the chess game of the 21st century,” and that may be truer than they realized: a game that reflects the uncertainty, chaos and confusion of our time.

I’d play chess against Donald Trump in a heartbeat. I don’t think he has the attention span, logical mindset or strategic vision to be a formidable player. Higher-dimensional chess variants, such as the tri-dimensional versions of Star Trek lore, don’t strike me as remotely suited to Trump’s outlook. But Trump does have a talent for exploiting ambiguities in rules, and for breaking rules when he thinks no one will stop him. If I were playing against him, especially in a tumultuous variant like Pi, I’d keep a sharp eye on the game, and count the pieces afterward.