I knew before I heard the voice that I wasn’t alone. 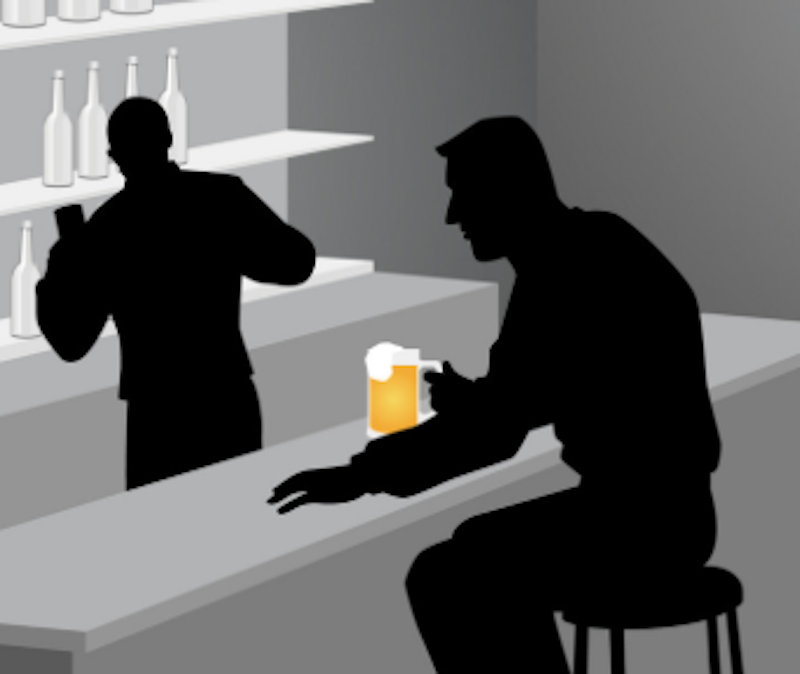 I gasp awake. I gasp awake and something falls from the ceiling and lands on my ear with a light smack. If I open my eyes it’s nothing, just a stray itch and nothing more, but if my eyes stay closed it’s a bug that crawls into my ear canal, claws and chews through my eardrum with its pincers, burrows deep within and lays eggs. When they hatch my head is filled with noise like the fizzing of soda water poured over ice—a family of insects making a meal of my brain.

My face was so close to the tabletop I could see every speck of the grain (my eyes went blurry so I blinked them back into focus), scouring it for a crumb or a granule, my nose bending painfully to one side, my eyes sore from the strain. An intense pressure at the base of my skull, the back of my head, not only kept me from pulling back from the hard cool surface but forced me forward, my lips pressed to the wood as my nose splintered.

I gasped awake and pushed the pillow from over top of my eyes, tossing it to the floor beside the bed. I blinked my eyes clear and looked up at the water-stained popcorn ceiling. Shadows danced upon and across it in the wasting light of the late evening. I knew before I heard the voice that I wasn’t alone.

“There you go—sleeping the day away,” it said.

Knowing you’re not alone and hearing it confirmed are different matters, and so even though I wasn’t surprised, my breath hitched in my throat and I eyed the dark figure in the corner by the door warily. It stretched from the corner over to my bedside, looming above me in a way that made the back of my neck tingle and the roof of my mouth itch.

“What do you want to be?” the voice asked.

I sat up and, before I’d thought of an answer, the shadowy figure grabbed my arms and raised them out before me, turning them this way and that, its hands sliding down to my wrists, then, taking me by my own hands, looked at their backs.

I swung my legs over the side of the bed. I had a pressure in my ears and sinuses that made it hard to shut my jaws and, despite just waking up, despite my fatigue, my heart was racing.

“You’ve tried all that before, haven’t you?”

“I want you to record something… some things.”

“No, no, not like that. You just need to see, and remember.”

I raised my head and sat looking at my double—that is, J.R. Powell—and watched him turn back into an elongated shadow and recede into the corner and go dancing up the wall and across the ceiling and bleeding into the silhouettes of the blinds.

He was shuffling unsteadily with a hand to the coarse brick wall when Brian Powell shook the cobwebs out of his head to find himself staring, bleary-eyed, at a dark, weather-beaten wooden door in need of a paint job.

FROM “THE GUYS WHO BROUGHT YOU”

THE JUNK THAT RUINED YOUR LIFE

AND WHAT’S MADE A MESS OF THE PLACE

YOU’LL SWEAT THROUGH THAT

YOUR TEETH WILL CHATTER AND

CHIP IN YOUR SCALDING HOT BATH

Many people have asked, and many people continue to wonder, what makes a man start fires? More to the point, what makes a man set fire to his life? What makes a man take a piece of crack, dissolve it in vinegar or lemon juice, and inject the resultant mixture into an already beleaguered vein? The assumption is generally either a death wish or a desire to self-medicate. What makes a man walk through a door he does not recognize, that causes his hand to tremble when he reaches out toward it?

To see/feel/experience something different—not necessarily better, but to roll the dice on an alternative.

The chipped, weather-beaten door swung inward and open, and Brian Powell entered, stepping in to leave behind the din of the sidewalk, the corner and the street (“Somebody had a rough night!” “Yeah, look at it this way: at least you ain’t that guy!”). The stale smoke and booze smells mingled with the subtler, fainter scents of dried vomit, old piss and sawdust on the way to his nostrils, and he felt somehow that he knew this place.

“There he is,” the barman said, a hint of warmth in his flinty voice despite its overall somewhat standoffish aspect.

Powell pushed the heavy wooden door closed behind himself, casting the room and its sickly looking inhabitants in the darkness they seemed to prefer once more, then made his way over to the bar. He looked at the burly, bearded barkeep hesitantly, thought he needn’t have, as the man was now much more focused on the news broadcast (“VIRUS, TERROR GRIP ANYTOWN” the ticker read) emanating from the crummy little television set up on the wall than he was on his new patron. Nonetheless, he did, after a moment, glance at Powell with his right eye, not otherwise turning his head or pivoting his barrel-chested body.

The bartender turned his back after breathing a short but meaningful sigh, grabbed a dark brown bottle and a glass, filled it with amber liquid, then put the glass on the bar before Brian, corking the bottle afterward. Then he returned his elbow to where it had been on the wooden lip of the bar—recovered everything about his earlier posture and position, in fact, up to and including the side-eyed half-sneer that had preceded his pouring of the drink.

“You gonna drink that, or you forget that too?” the barman asked with an impatience that carried a tinge of good nature.

His hands trembling, Brain smiled a little, laughed a sharp, desperate sounding laugh, then leaned forward—averting his eyes to see if any of the others were looking—then sipped a bit of the potent whiskey from the nearly overflowing shot glass, draining it to about halfway. He leaned back and panted some after and then straightened up.

“Christ...” the bartender said coarsely. He lit a cigarette, shaking his head while doing so, still not facing Brian straight on. “Where the hell’ve you been, Kid?” he asked as he exhaled a plume of smoke from his slightly crooked nose.

“I had a boyfriend—he had dark, wavy hair, olive skin, chocolate eyes, these very delicate, gentle features—and he told me he would take me away, get me away from... from all of it... this. He had a big car with a bench seat. Leather, warm. I felt so safe, like whatever I was running from didn’t matter... couldn’t get me. And when we got to where we were going it was a lot, gravel, in back of like an old filling station, with an apartment on top, you know, on the second floor...

“My boyfriend whispered I should be quiet, and this kindly old man came out from the first floor, hugged my boyfriend be... before he had even gotten all the way out of the car, reached over and gave my arm a little squeeze—it was so thin in his hand, his hand was big and rough and he smiled so kindly at me—then he gave my boyfriend a key and said, ‘You done good, boy. You and her’s safe now,’ and he... he leaned over to look in at me and it seemed it was... real important for him that I heard him and saw his sweet old ugly face when I did. ‘Safe,’ he said and smiled.

“And then my... my man looked back in at me and, like, he jerked his head a little—he had the cutest smile—letting me know I could come on, everything was okay,” Brian swallowed and took a quivering breath. “And I slid... across the seat, over to the driver’s side, and he took me by the hand—I felt such an immediate and deep... connection—and I got out and he pulled me close and I hugged him, you know, across the chest with my free hand,” he pantomimed this, his eyes still closed, “And I could feel his warm breath on top of my head, moving through my hair... I had long hair, curly, with a couple of bobby pins. The old man was gone. I think he shut the car door because I remember I jumped a little... just took me... caught me off guard, but my boyfriend whispered it was okay, and even when I looked up and saw the light on in the apartment and an old woman looking down at us through the curtains, scowling, I didn’t care.

“We went into a... like a shed, or a garage—that’s what the key was for—and as soon as the door was shut, the sliding door, I looked at him and that simile and I knew I loved him, and I put my hands on his cheek and kissed him... just kissed him so passionately that, all at once, I was, you know, a little wet down there... and my eyes were hazy and my hair was feeling matted and—and I wanted one of my whole tits in his mouth, and I told him that. I told him that and he... he looked at me and kissed me again. He kissed me this time, and it felt even better.

“And he picked me up, and I felt so light in his arms, even though he wasn’t really very big or anything, but he put me down gently on a... there was a sofa, drab green, scratchy fabric that itched my bare legs, but the cushions were soft, and he laid me down easy and was kissing all over my body... under my skirt... inside my sweater... on my inner thighs... when he came back up I threw my arms around his neck and told him... I told him—I was breathing so fast and hard and my heart was racing—‘Take me... please, take me...’ and it didn’t hurt at all, it was just...”

His eyes were squeezed shut very tightly, and he covered them with his hand, took a sharp, sudden breath. “Then there was a... change. A knife... at my neck, pressing against my throat, and I could feel warm liquid trickling down my collar bone to my breast, and I could smell the iron in the blood welling there, and I started to... to panic... and he was folding me up, like... like an accordion, my legs coming up over my head, and I couldn’t move ‘cuz... the knife...”

The barkeep growled fiercely and threw a metal beer stein at one of the giggling drunks down the bar. “Get the fuck outta here then, ya lousy prick! All of ya!” he snarled. “You or any’a yer buddies come back without the scratch to pay off yer tabs an’ I’ll take more than what you sonsabitches owe outta yer asses!”

The drunkards took quick, desperate final gulps of their drinks and then bolted to the door, briefly throwing harsh light on the dilapidated bar once more. Brian barely noticed this if at all, as his eyes opened only long enough to find and drain the rest of his double-whiskey, then tilted his head back, looked at the skyward for a second and shut his eyelids again, tears rolling down his dirty cheeks.

“Well...” the grizzled bartender said, breaking the long silence that had set in. He flicked open his Zippo, re-lit the smoke—it having gone out before—and took a pull. After exhaling, he said confidently, “Ya ain’t dead, Kid. That’s one thing I can say for a fact.”