Breakdown Dead Ahead In Bayside Hills

Revisiting the area where my favorite record store once stood. 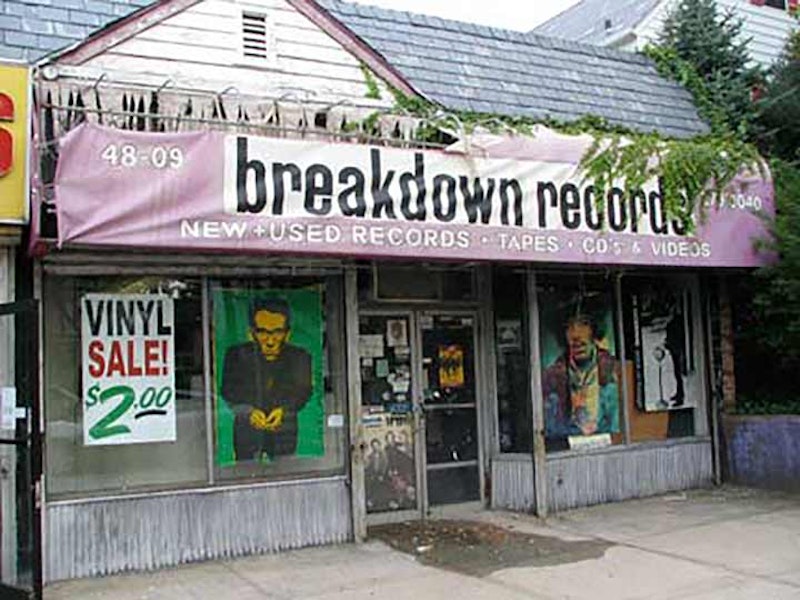 I haven’t bought a CD in a few years, though I still have a CD collection numbering about 400 and an LP collection of approximately 250-300, and still play a lot of them regularly. The past couple of years, though, 99 percent of my music buys have been online. In many ways the record market has gone back to what it was in the 1960s and 70s when 45 RPM singles pushed the industry. With digital downloads, every song is now a single, and you can buy songs individually without getting eight duds at the same time. I have Spotify in my machine as well as Apple Music, but I’ve largely avoided streaming because I own so much music in my collection, and Spotify has been known to yank music from its collection from time to time.

With streaming, mp3s and digital downloads, you sacrifice album art and lyrics printed on the LP jackets; for a fan of type fonts and graphic design like me, that’s a loss. (I think the last new LP that I bought was REM’s Green, and that was in 1988!) That said, I was a frequent denizen on Sounds on St. Mark’s Pl. (where the clerks sat really high at the front of the store, as if passing judgment on your selections), Venus on W. 8th between MacDougal and 6th (where I snagged several Soft Boys LPs; I was hooked after hearing “Underwater Moonlight” on a mixtape in December 1982) and Midnight Records on W. 23rd near 8th Ave., long gone but still an online entity.

Had I been in Bayside, Queens the past 20 years or so, Breakdown Records, on Bell Blvd. just south of 48th Ave., would’ve been the mecca; check the posters in the window: Costello, Hendrix, the Who, and not a Coldplay or Decemberists in sight. Note the stickers for the old WLIR and WDRE-FM, required listening for me from 1981 to about 1995. It was sort of stuck in time. Like Midnight, Venus and Sounds, it’s also vanished.

Breakdown Records was in Bayside Hills, the southern portion of Bayside, a large neighborhood in northeastern Queens. It’s largely a quiet neighborhood with separate homes with wide lawns and yards, and many streets have center green medians. There are incursions of modern development, which means concrete lawns, exposed air conditioners and meters, and unimaginative construction. There are also pockets of rurality remaining in Bayside Hills, and even a couple of samples of notable architecture. 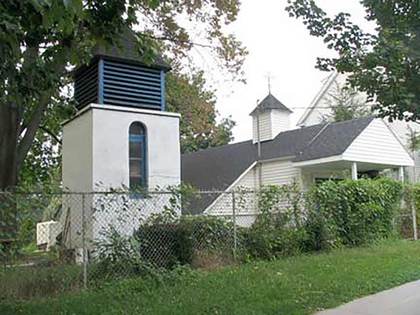 St. George Russian Orthodox Church is a small country church along 46th Ave. between 211th and 212th Sts. near bustling Bell Blvd. It’s tucked away just south of pedal to the metal Northern Blvd., which was an Indian trail, then a tolled road, and now Route 25-A to eastern Long Island. 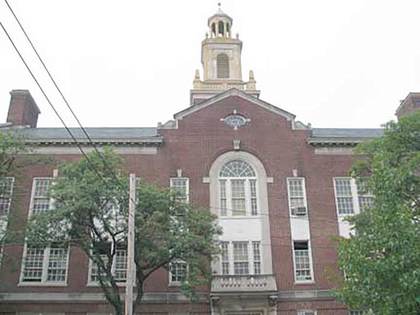 PS 31, 46th Rd. near 211th, with its golden double-ledged spire, is one of the most recognizable buildings in Bayside Hills, towering over its neighboring buildings. It’s the region’s oldest public school. Established in 1842, the original one-room schoolhouse was Bayside’s first school, located on the W.L. Titus Farm on Rocky Hill Road. In 1842 a sum of $360 was voted and raised to build the school on the Titus farm near present-day 48th Ave. This building served the community until l859. In 1864 the trustees, at the request of 16 voters, called a special meeting to vote for incorporating the school district as a Union Free School District. In 1883 the two-room school building was moved to the site of present day P.S. 31. In February of 1895 the school opened its new quarters, considered one of the finest on Long Island. After the consolidation of the Borough of Queens with the City of New York, this school became known as P.S. 31. Less than 50 years later the larger building we know today was built on the old site which still serves the community. 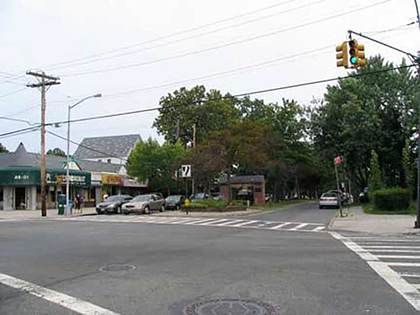 Bell Blvd. takes on a suburban character between 48th Ave. and the Long Island Expressway, with a center median and plenty of street trees. The road doesn’t honor Alexander Graham Bell, as many suspect, but shipping merchant Abraham Bell, who purchased about 250 acres in what’s now Bayside in 1824. Bell Boulevard (at first named Bell Ave.) was once the dividing line between his two farms. Bell’s mansion on Bell Blvd. and 39th Ave. remained standing until 1971, when it gave way to a building now home to a Tiger Schulman judo school. 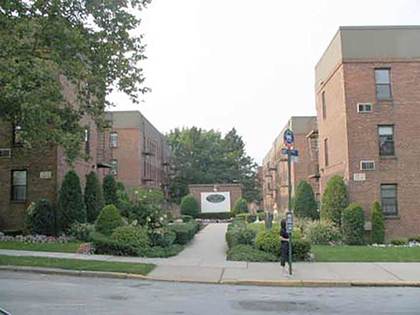 The Rocky Hill Terrace Houses, 48th Ave. east of 215th St., is a canny tribute to 48th Ave.’s former name, Rocky Hill Rd. Rocky Hill Rd., which once was a reverse-L shaped road running through most of eastern Queens, encompassed sections of 48th Ave., Bell Blvd., Springfield Blvd. and Braddock Ave., running from Flushing to Bellerose, but today only a two-block section between 47th Ave. and the Clearview Expressway remains today. 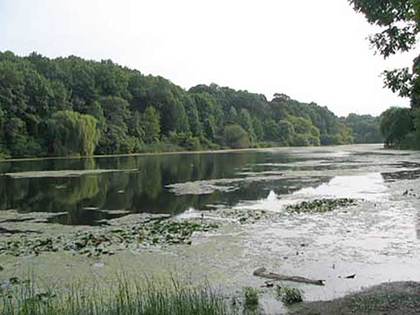 Bayside Hills, and much of eastern Queens, provides pockets of rurality in the big town. Oakland Lake, just below 46th Ave. between Springfield and Cloverdale Blvds., is the largest of Queens’ small ponds and lakes, save Kissena Lake and Meadow and Willow Lakes in Flushing Meadows-Corona Park. Oakland Lake was once called Douglas Pond in honor of George and son William Douglas, early developers of the peninsula that became Douglaston. Oakland Lake and Oakland Gardens (south of Bayside Hills and the Long Island Expressway) take their names from the estate of Frederick Newbold Lawrence, a prominent 19th-century Queens family; Lawrence built a mansion in the area in 1847 that he called “The Oaks.” (A family member, Cornelius Van Wyck Lawrence, is buried in the tiny Lawrence family cemetery at 42nd Ave. and 216th St. at the LIRR tracks.)

In 1896 John Taylor, who by then owned the old Lawrence lands, organized the Oakland Golf Club, and in the 1960s NYC bought the club and built Queensboro Community College, Benjamin Cardozo High School, and PS 203 on the old property just south of the lake. According to the NYC Parks Department, Oakland Lake was thought to be 600 feet deep, but the lake bottom was found to be just 20 feet in 1969. Similar to what was done with Kissena Lake, Oakland Lake was surrounded with a concrete lining and “citified” in the 1930s. After lean years in which the lake’s condition deteriorated, a revitalization effort was spearheaded by local resident Gertrude Waldeyer (1908-1987), whose Oakland Lake and Ravine Conservation Committee raised $1 million to restore the lake to its natural state. It’s now home to catfish, sunfish and carp. The pedestrian promenade ringing the lake is named for Ms. Waldeyer.