Maybe the goal of human life isn't to feel happiness, but to feel everything. 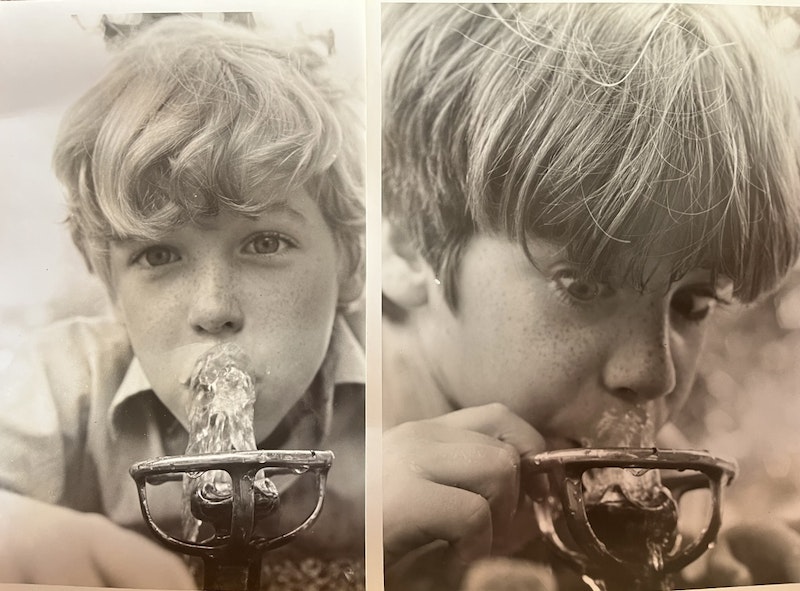 The author and his late brother Adam, circa ‘68.

The purpose of human life, as Aristotle, John Stuart Mill, and a hundred "positive psychologists" agree, is happiness (eudaimonia, flourishing, well-being), often construed as a life of many pleasures and few pains. I think this claim is empty, or if not empty, false. It asserts without any reasons that there’s a goal of human life, which in itself ought to be controversial. And it makes the goal internal to each individual. A happiness-oriented ethics or psychology says that we're here to have positive feelings.

Perhaps I felt the pull of that in my 20s, when I might’ve spent some of my time chasing pleasures and avoiding pains. But in my 60s, I think it's a sad and ridiculous misapprehension of the nature and goals of human life. I'd like to experiment with this point of view: I'm not here to have good feelings. I'm here to have all the feelings.

On the other hand, maybe I'm not here primarily to have any particular feeling at all. Maybe I'm here to help others or love people practically by giving to them or to try to get out of the trap of my own head. But insofar as my goal is internal, I want it to be to experience all of human life. The warm baths, the orgasms, the first high: I wouldn't ditch them out. But you know what? I also don't think I could ditch out the despair and loss I've felt when people I've loved have died (my three brothers for instance), or when things have in other ways gone terribly wrong.

It's not like you can detach the positive from the negative feelings. One's feeling of loss at a death, which can be entirely overwhelming, is proportionate to the love one felt or exchanged with the deceased. I buried my brother Adam in 1991. I helped dig his grave at my parents' place in Virginia. I lay down in it and looked up at the sky. I'm here now again, preparing in the fullness of time to bury my mother, and loving her as hard as I can until then (while also dealing again with all the irritation I felt when I was 14). She's the last survivor besides me of my family of origin.

My kids have gathered on and off down here to deal with my Mom's situation. It's difficult. But it's also a primordial human experience; it feels both overwhelming and inevitable. And it feels important. It's a “negative” experience; no one seeks out a feeling of loss, or at least I hope not. But even despair’s a necessary element in the full range of human emotions. You can't fully hope without knowing it. But despair isn’t there to teach you hope. It's there to fill you with feelings that seem bigger and truer than yourself. It's there because we're people, because we’re the kind of creatures we are. Maybe the worst fate would be to end up not being capable of losing hope.

I’ve loved intensely or totally, if also in a fucked-up way. Marion Winik and I, for example, called our relationship "Our Great Love" (OGL): we were obsessed with merging with one another. That's not one of the real possibilities, and the long break-up was as intense as the OGL. I didn't want to feel the hatred, rage, loss, obsession, and self-loathing in which I lived for years. But it also displayed the fact that I can feel it all; it proved to me again that I’m intensely-feeling person, both ways round. One way round isn't one of the possibilities, positive psychologists.

All this sounds like I want pain. That would be perverse if true and is also (I think, for the most part) not true. I don't want people I love to die. I don't want my relationships to end. In other cases, the situations and the feelings are more complex and conflicted: as one's children becoming independent, for example, one is needed less. There’s loss built into nurturing.

As I've gone through the losses, the rages, the depressions, the addictions, the recoveries, the relapses, and so on: I would’ve deleted each of them. I’m not saying that it's good that these things happened, for me or for the people they happened with. What I’m saying is that I’ve felt everything, and as I think about it from here, I can be proud and happy about that even as I can still wish that the precipitating events had never happened.

But I’m also trying not to affirm the negative things on the grounds merely that pain’s necessary to pleasure, or misery to happiness. I’m not trying to say that I'm glad about all these experiences because "they made me who I am today," because who I am today is not a particularly happy or resolved person.

I’ve felt it all, and have the odd or funny feeling that I needed to. At a decent moment, I can be grateful for having had a lot of the fundamental human experiences. My brother Adam died at 29, of unhappiness, we might say. He got a big old dose of that, but he missed a lot of what human beings can feel. He never got to experience having children, for example, or the loss of his parents. He never got to feel what it would’ve been like to lose me.

If we're here to have all the feelings, right now I’m doing extremely well. I've been feeling as much sadness, loss, love, nurturing, emptiness, overfullness, confusion, and clarity as I'm capable of feeling. In the end, I intend to try to experience my own death, even as I also intend to try to avoid it as long as possible.